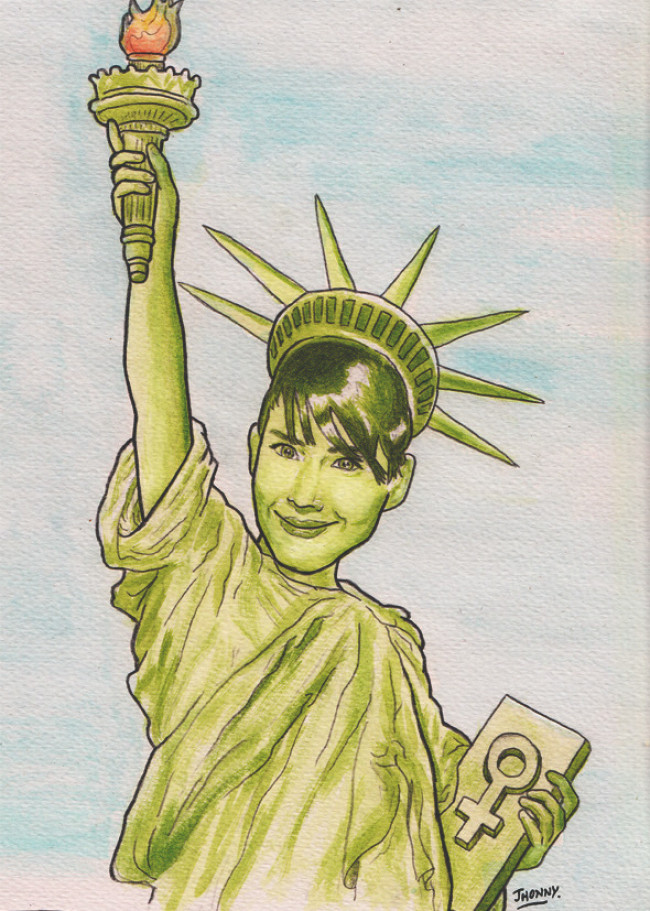 KATHLEEN HANNA: In every way imaginable! I really can’t say enough about the guy. I think he is … [pauses] have you ever seen that movie Evita with Madonna in it?

KH: There’s this scene in Evita and she is dying, it’s super sad. Her husband is standing over her (she’s playing Eva Peron) and she sings this really beautiful song. The lyrics are like: you must love me. She just figured it out as she was dying. She never really felt loved. It was on her deathbed that she was like [sings] you must love me. I guess I just feel that I’m really lucky that through him I have realised how much love I have in my life. Not just him but he has helped me see how much my friends care for me, I mean I already know how much I adore and totally love my friends but, I always kind of saw myself in the kind of ‘dad role’ taking care of people; giving up stuff I wanted to do to make other people happy. I think a lot of women get trapped in that role. People sometimes see it as the ‘mom role’ but I always see it as the dad role: the provider, the protector. I really saw through him how to ask for help and get it. Just realising that I don’t want to be on my deathbed saying, oh my god you loved me. I want to experience that every single day. I learned how to let that into my life. How are you making me open up so much? This is crazy! You’re a really good interviewer [laughs]. It’s really bad because I never tell people corny shit like this. I’m going to be really embarrassed tomorrow [laughs].

Truthfully, I just think it’s because I really, really care about the people that I interview. I love hearing people’s stories, I love sharing that with others and I hope when someone reads the work they will be inspired to do rad, positive things in their own life. That’s pretty much the main reason I do it. I’m not getting paid for this.

This is my gift.

KH: Well you’re really good at it because I usually just tell people, the album has this many songs and this is when it’s coming out.

I believe that people are fascinating regardless of their latest record or tour.

KH: It’s just nice to be able to have a conversation and be totally honest. I don’t want to be guarded anymore. I don’t want to say the thing I’m supposed to say to sell the five records I’m going to sell [laughs]. Who cares at this point! Hopefully when people read interviews with people that are supposedly ‘big deals’ because they get on stage, they realise, oh I’m totally like this person, I could do that too if I felt like it.

On The Punk Singer Kickstarter, I noticed it said that you’re way into interior design?

KH: [Laughs] Yes that is true. I’m trying to do set design now. I’ve done that for a couple of shows. I went to school for it after I left Le Tigre. I still have one class I need to do to get my Associates degree. I’m really interested in a lot of design. I don’t know if I’m the kind of person that is going to be able to work with rich people to design their apartments and stuff. I think I want to use the skills that I got for set design and maybe take some classes in set building. I enjoy being behind the scenes and I enjoy making things look beautiful. I really like the challenge of somebody saying, this is what the themes and the ideas are and making it look like that.

Having studied interior design then how would you describe your home?

KH: Oh my home! [laughs]. I kind of describe it as it’s like ‘The Little Match Girl’, that fairy tale but, it’s like if she had some money [laughs]. If she married someone rich this is what her house would look like. I like bright colours. I like to be comfortable. I think my house is cosy and comfy. We always have people staying with us and lots of life and energy in our house. My whole design thing was making it a place where people feel comfortable. I’m so corny it really is unbelievable! [laughs]. You get this way when you get older. I still have like seven years on you so you just wait! You’ll start talking about your soul and love …

Ha! It’s funny that you mention that because I already do, I’m all about that kind of stuff. I have a project on punk and spirituality.

KH: Oh how interesting! Are people willing to share that information? That just seems so … I won’t talk about sex because … like I can say someone is cute or a guitar riff is sexy but I don’t talk to people about sex. It’s just very personal. There’s certain things to me that are very personal. Spirituality seems like one of those things. I can’t believe or imagine … what are people saying?

Everything! Everyone has a different take on spirituality.

KH: Are most people meditators or church goers?

Some are each and some are both. I’ve talked to punks that are Christian, Buddhist, Hindu, Islamic, Spiritualist, Atheist and everything else in between, it was important to me to include as many different ideas and experiences on it as possible so people could make their own ideas and form their own opinions. I wanted to ask you about the film The Punk Singer. In a part of the preview there is a moment where you are crying; what was one of the hardest things for you to talk about?

KH: I think talking about why I haven’t performed in so long was really difficult. Singing is my life and I haven’t done it publically for a really long time. While that has been something that I have needed to have a break from it’s also something that I have missed quite a bit. It’s really hard. I really touch on some personal stuff in it that I have never talked about publicly that was just difficult. In the same way that you were saying about interviews and being honest and not just towing the line of I’m going to say the thing about my record … I just felt like I needed to open up because somebody, even just one person, might relate to a little part of my story and feel like they’re not alone. I tried to be as honest as I possibly could. As you know, I cried sometimes in it. Sini [Anderson] who is filming it is a really close dear friend so it’s really easy for her to make me cry [laughs].

I cry all the time. I cry at sad things, I cry more at happy things though, at everything.

I’m a Scorpio like you so maybe that has something to do with it. We can be intense.

KH: [Laughs] Yeah it is a rollercoaster. I’d much rather be on this rollercoaster though than just be like [makes a noise] ehhhhhhhhhhhh, like flat lining.

I know exactly what you mean. How did you feel watching back what people close to you said about you in the film? Was it awkward or surprising?