Amanda Palmer and friends in all their glory, live at a house party in Lutwyche 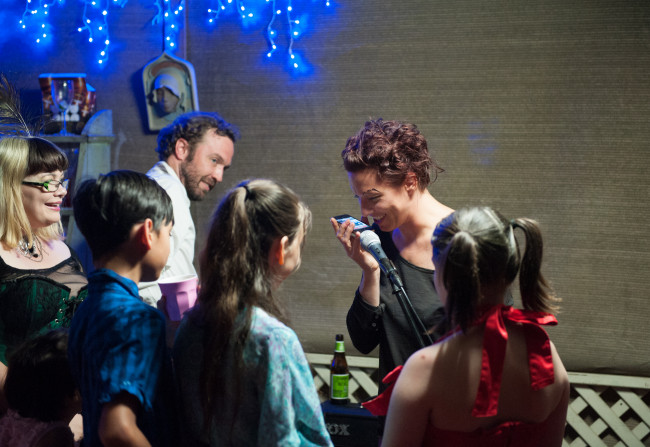 When we arrived outside the house in Lutwyche to see Amanda Palmer, it was 6.30pm and eerily quiet from where, just a few kilometres down the road, Australia’s music industry was frantically hobnobbing and self-congratulating themselves for another BigSound. I had visions of a punk-cabaret-fest full of brutal-profanity-wisdom, where the burlesque and the naked body would be the departing point for self-realisation and actualisation. Instead, I was faced with a white picket fence and children playing in the street.

Me: Is this where Amanda Palmer is playing?
Children: Yes! She’s coming now. My mum is getting her. I LOVE Amanda Palmer.

Walking around the yard, the performance area was the unexpected, yet typical, Australian site of family and all things ‘good’ and ‘Aussie’: the back deck. Glancing at the crowd was like being caught in some strangely manifested family gathering that had strung together 30 or so unlikely people, who were held by some common, invisible thread. And when I say unlikely, I mean it was no indie crowd – the exact antithesis. There were young, middle-aged and older women in full cabaret attire and semi-gothic make-up, men dressed to match, and everyone seemed to work 9-5 day jobs that didn’t really correspond to who they were, here and now.

I knew Amanda Palmer arrived when I could only hear screaming children: “AMANDA PALMER IS HERE! AMANDA IS HERE!” It’s gotta feel good when kids think you’re a big deal: they’re too young to fake excitement, they actually like you. And one of the children, Willow, wrote Amanda a song.

Soon Ragtag Band (or rather three quarters of it) played and it was all bourgeois romance piss-takes, from a Tripod song to an unofficially recorded Kinks cover about a man who finds his woman attractive only in the dark. Innocent three-part harmonies built up the satire, culminating in a song about hitting on Australia’s newly elected prime minister’s wife, Mrs Abbott (“Older women and younger men”).

Sure, the songs were all covers, but they were equally dorky, endearing, wryly observant and tongue-in-cheek: there was no song that couldn’t be appropriated. They traversed genres with varying instrumentation – bass clarinet, a keyboard you whistle down (a “flodica”), trumpet, ukulele – and the band’s obvious penchant for taking the piss, as well as theatrics, emphasising songs of throwaway comic genius.

At this point I’m starting to feel sorry for the poor sods waiting in line at BigSound with their undiscriminating attitude to music: Lifeless. Lacklustre. Lobotomised.

Then someone yells, “I hope you like cabaret”. And I don’t really know if I do, but soon a woman is flinging and stripping everywhere in her vaudeville attire. She’s whipping her boobs round, with a fierce look on her face as she tries to set fire to tassels hanging off her nipples. We’re all cheering and clapping and laughing, and try as hard as she can, the second boob tassel just won’t goddamn light! But that doesn’t matter and she’s shaking and grinding like hell, taking shit off no one, with one lonesome orange flame whirling ridiculously. A second performer walks on and we see her brilliantly discard her robe to reveal her constantly vibrating booty, jiggling like taut jelly as Amanda Palmer slaps her butt and is kind enough to whack $10 in the panty-strap. Suddenly I realise I’m in a room with people actually comfortable with sexuality and I’m relieved to be around a sexual culture that doesn’t exist just to please men.

The children are allowed to enter again and Amanda Palmer walks up, ukulele in hand and singing ‘Map Of Tasmania’, prompting an enlightening and somewhat alarming discussion on vaginal decorations (to which I’m feeling timid). Her voice then comes throttling towards me during ‘In My Mind’. I forget she’s heaven-tongued, as warmth and resonance purvey her. She makes me dewy-eyed, ya know? Amanda Palmer, under the sweetest softest night light, as children sit at her feet while she sings ‘Yellow Submarine’.

She’s no sap though. You should hear her pump out ‘Twist And Shout’, ignoring the tedious rock routine and giving pure performance that’s also resoundingly honest (her true genius). I was expecting a mythical character; overt, screw loose, perhaps offensive and yet she’s so… normal. There was no imposing charade or self-importance, no fantastical cabaret costume, just a wry sense of humour, a natural ease with children, approachability and such fun.

Which is why I’m downtrodden that when I had to duck out for a mere 15 minutes, Everett was overwrought, raving about how I had missed a 15-minute rendition of ‘Ukulele Anthem’, initially telling how Sid Vicious (and Nancy Sprungen) might still be alive if only he had PLAYED THAT UKULELE. Everyone [near everyone – surprisingly timid Ed] was up on their feet, dancing, stomping, rejoicing in ukulele glory and all I can do is imagine.

Amanda and her ukulele lead us for Radiohead’s ‘Creep’ and her voice is almost sultry, if it wasn’t so disconsolate, so crummy, so encased in its own lyrical dejection. I’ve never truly ‘gotten’ Radiohead [amen! – Ed], but something feels different as we go through the wet-blanket lyrics; a type of blue funk is coming on.

Then this: I feel unnecessarily heavy and I feel the light particles, all white/yellow/blue/indescribable and the cool almost-summer air pushes through my skin and time and space are compressing and collapsing as memories start pouring through; being three years old and feeling like shit because my mum is upset I pulled the plastic streamers from my bike.

5 Responses to Amanda Palmer and friends in all their glory, live at a house party in Lutwyche