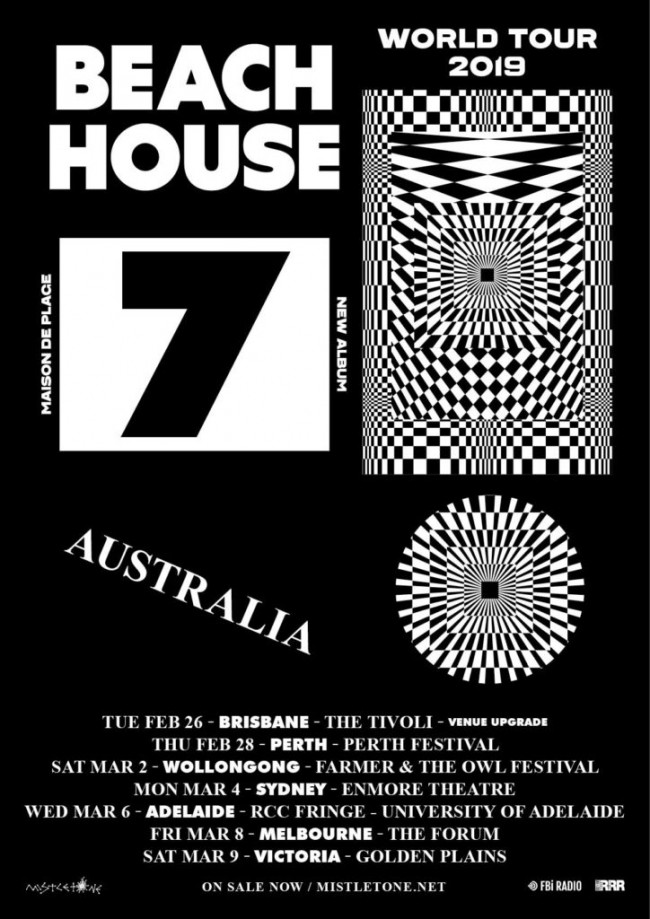 Beach House’s Music Is About Escape

I like Beach House. The older records hold up, they seem to have the strength of resisting time. At their best moments Beach House transcend, pushing aside labels and cliché they touch upon white-hot moments of feeling and the spaces between.

And just to go back on that earlier point, Beach House have been around for a while. They began in 2004, leading their first life as cult favourites in the indie crowd. They now seem to be leading a second. With 7, the band became bigger. Maybe Beach House had just stuck around long enough for their number to come up. Perhaps the sound they plied moved closer to the centre of pop, perhaps they simply became more of a force unto themselves.

It’s hard to put a finger on it as I walk to their concert but the kids lining the street tell me a little more. Beach House’s fans are mostly young, mostly looking for a good time. They jostle among one another as they enter the venue where the band is soon to play. They chat excitedly while fumbling for IDs. Passing through the building’s doors, they leave a smell of alcohol, tobacco and cheap cologne lingering in the night’s air. I brush past it and enter, joining them in finding refuge from another night in bored suburbia.

When Victoria Legrand sings, it’s in a breathy voice. Her synth wobbles as drum beats synthetic and real pull it to the floor. Alex Scally’s guitar works itself around. This band’s music is simple, minimalistic pop decorated with less-than-conventional musical ideas. Legrand doesn’t have a massive vocal range, but she has melody.

Beach House don’t just create music but set mood. A light show shimmers as they play curled in stage mist. Legrand wears a coat that constantly flickers in bursts of stage light. Her hair covers her face and falls well over her shoulders as she leans over a keyboard. Scally stands to the left, big hair and a guitar. Both look down at their instruments with laser focus. There’s a drummer too, he’s completely unhidden but rarely draws the eye.

Cloaked in half-light, Vic and Alex are mysterious figures. What they’re like up-close I will never know except from what I see from press shots or on the inner sleeves of album covers. Sure, this could be found out but why puncture the fantasy? I’ll take the mirage, beautiful as much as it was ever there.

‘Space Song’ comes fifth last. Good, but never quite hits like it does on record. ‘Lemon Glow’ is better. Maybe it’s the trap-infused hidden beneath it all, but regardless it’s a crowd mover.

7 is another addition to the band’s studio recordings but its music casts its own special spell live. When it comes to their new songs the band are locked in. The music is space-filling. There’s a lot of small detail but none of it is left to chance. Even if delivering a simple arpeggio or just two notes Scally stands locked in concertation looking as if he’s making a Herculean effort. It feels like it’s no pose. He and Legrand search for the transcendent within their music and by sympathetic vibration beg their audience to do the same. The message is to let go, don’t think – feel.

Walking away from the set, Beach House’s music now seems to me like an escape. What has made 7 and their whole catalogue gel with a new generation of listeners is the virtue that it was barely there. The millennial cliché is that anything touching the ambient offers an investing beacon against the noise and anxiety of an information saturated age. But far from being drawn into the background people still seek music’s emotion, it’s beauty and glamorous excess. They want to be ecstatic, taken out of themselves. Whether it’s in a sliding guitar line or a vocal growl Beach House can offer a rare measure of all these things.

The meeting of their vision and the currents of mass culture were by no means preordained but somehow – and through no short amount of hard work to simply survive this long on the band’s part – they’ve found one another. For a moment at least. I hope that there will be more.