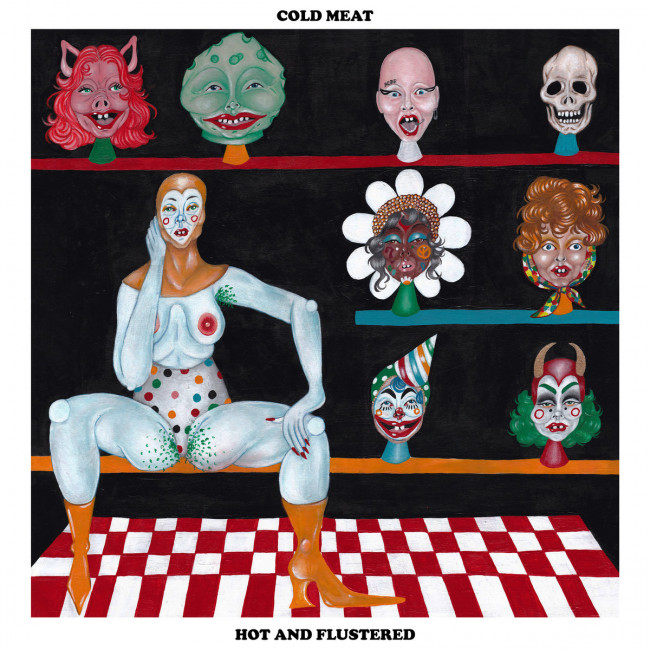 Nearly half a century on, punk rock has been made palatable in some ways, through its inevitable dilution with pop, but Perth’s Cold Meat are a band who don’t wish their punk rock to be palatable for you, just as their name doesn’t bring to mind a palatable image – based, as it were, on a song by the eccentric proto-punk band electric eels, which goes: ‘Once I had a hot lover, without cold cold grease / but you can’t have a picnic with cold cold meat.“

If punk rock was an organised religion and pop-punk a popular sub-sect, Cold Meat would be orthodox. They’re orthodox in the same way that Kathleen Hanna was orthodox in 1991, pogoing across the stage and belting out her feminist lyrics with an understandable fury, channelling the energy of ‘70s punks like Ari Up and Poly Styrene. Cold Meat’s debut album Hot and Flustered, which came out in late March via Helta Skelta Records and Static Shock Records, may well be a new punk gospel. It’s less nihilistic than Old Testament (think Johnny Rotten and “no future”) but still dark, given the times we are in, and this album was written pre-pandemic. The darkness, however, isn’t depressing; instead, it’s invigorating to hear it all addressed in such a scintillating way, and Hot and Flustered is more about a call to arms rather than merely documenting wrongs.

Opening track ‘Pisces Crises’ is a glorious dive into the album’s frothy maelstrom of modern life and all that is wrong with it, a la the Throwing Muses lyric ‘look at the dirty water, and swim’. The track is a witty takedown of people who believe a little too much in interpreting life through astrology, admitting at the same time that she is going through a series of “Pisces crises”, acknowledging her own star sign while critiquing the zealotry. “Blame it on Mercury, blame it on Jupiter, blame it on Mars”, vocalist Ashley Ramsay hollers. Really, she’s more annoyed with herself than with anyone else, for having a meltdown in the supermarket in the first place. The supermarket itself is a fitting context for a punk song — as with The Clash’s ‘Lost in the Supermarket’ and ‘Fairy Tale in the Supermarket’ by The Raincoats, Cold Meat’s ‘Pisces Crises’ acknowledges it as a site of existential dilemmas. The solution is obvious to them, though — unlike that overly zealous cohort of the astrology crowd, Ramsay wants to take responsibility for what’s going on, rather than take the easy way out and “blame it on the stars”, as the song goes.

‘Women’s Work’ reminded me of Viv Albertine’s ironic Christmas single ‘Home Sweet Home’, which featured the sardonic Virginia-Woolf-infused lyric “A man needs a maid, a maid of his own/ in his home, home sweet home/ a maid needs a muse and a room of her own”, which could be a foremother to this brilliant Cold Meat take. It’s a nice follow-up from their 2018 single ‘Maternity Stomp’, which caught the eye of Pitchfork and just quietly, might be one of the best punk songs ever written. In ‘Women’s Work’, Ramsay addresses gender inequalities in housework, which unfortunately still persist in 2020: “Cos she’s got better things to do, than cook and clean up after you – you just want a housekeeper!” She could be referring to the 1950s cliche or, more sadly, to the modern-day conundrum of the heterosexual couple who work equal hours but not when it comes to housework. She rebuts the tired oft-given excuse that this unequal distribution exists only because it’s men who are the main breadwinners, which is untrue in 2020, while at the same time acknowledging that obviously it doesn’t mean men don’t work hard at all: ‘Turns out he’s just like his father / He works hard but she works harder.”

Guitarist Kyle Gleadall’s circuital guitar lines convey the monotonous nature of their protagonist’s housework perfectly, with the treble turned right up. “A woman’s work is never done, goes on and on and on”, Ramsay roars as the track draws to an abrasive close, building from caustic indignation to full-blown punk fury. The lyrical repetition echoes ‘Maternity Stomp’, on which she mimicked the head-splitting cry of a child with the repeated refrain “Wah wah wah wah.” On ‘Women’s Work’ (and ‘Maternity Stomp’ before it), Charlotte Thorne’s drumming sounds like someone literally banging their head against a wall in frustration, and throughout the album her drumsticks seem to operate as a kind of barometer for the weather of Ramsay’s vocals. Together with Tim Guthrie’s compact bass melodies and Gleadall’s brusque guitar lines, the album’s musical arrangement forms a terse and compressed landscape for Ramsay’s tornado-like voice to let loose.

The core brilliance of Cold Meat is that Ramsay and co aren’t trying to be political – they just are, in a way that draws from earlier punk protest but is also entirely its own revolution and of our times, from covering the aforementioned gender inequalities and the religious fervour of the astrology revival to more urgent and dire societal issues such as workplace harassment and the film industry revelations that shocked the world and exposed the misogyny in other industries (‘Industry Sleaze’) and the climate-deniers who continue to obstruct a large-scale move to renewables and convince themselves the damage isn’t too bad, a persona Ramsay brilliantly inhabits on the track ‘Beach Photography’: “if you have some time to browse my beach photography, you’ll see water levels aren’t on the rise.”

Along with ‘Women’s Work’, ‘Beach Photography’ is one of the standout tracks on this album, the most urgent, politically, and arguably the most important punk song since Bikini Kill’s ‘Feels Blind’. Ramsay seems to reinforce the infantile and self-satisfied nature of the ‘beach photographer’ who believes they are the one “who proved everybody wrong, I was the one who was right all along”. She also references the mind-boggling belief that certain climate-deniers subscribe to, that CO2 is good for plants and so an excess amount would stimulate more plant growth, and so must be “good for you” as the song’s antagonist bleats.

In just two minutes and twenty seconds, ‘Beach Photography’ presents a synthesis of climate denial that covers all the key points and ends up being haunting, with Gleadall switching to a melancholic guitar line in the last fifty seconds, leading one to consider that in a future where this character’s beliefs end up winning, they finally realise they have contributed to a collapsing world, and have to “Go to a place inside my head, where nobody is cruel to me about the stupid things I’ve said”. The fact that Ramsay can inhabit the very character she despises is testament to Cold Meat’s more nuanced and just as damning takedown, especially at a time when nuance is lacking in much of public discourse. This kind of distillation of contemporary politics across the spectrum, including the commodification of punk culture (‘Cinematic Fashion’), is rare in a time when many punk bands can sound contrived and seem to have nothing new to say.

‘Make it new’ was the slogan of 1920s Modernism, the literary equivalent of punk rock, and this statement applied across all the reinventions in the arts, including Cubism and Dada. After the counterculture protests of the ‘60s gave way to the new confines of derivative pop and a new hegemony, the punk rock explosion of the 1970s drew from the energies of these previous rebellions in the arts. They took rock and roll and ‘made it new’, shattered it in order to shape it into a form that allowed room for the musical expression of feelings like alienation and rage, just as Modernist artists sought to express the shock and disillusionment that followed in the aftermath of the first mechanised war. It’s no coincidence that many punk rockers went to art school, including Ramsay, who also designs most of the artwork for the band’s releases and puts out a feminist zine called ‘Jigsaw Feelings’, the  title a nod to the Siouxsie and the Banshees song. All things considered, Cold Meat, too, ‘make it new’, absorbing decades of punk and regurgitating it in an unadulterated form relevant to the 21st century, with its fake news, climate denial and social media narcolepsy. They’re also one of the most truly DIY bands I know of, with Gleadall even running his own home-grown record label, Helta Skelta Records, providing local access to all the latest international punk records that are usually hard to get a hold of in their hometown.

Despite their fierce political focus, the band aren’t without their trademark humour; their name, after all, is taken from the electric eels song they found the most hilarious, and the origins of the title of their last EP, ‘Jimmy’s Lipstick’, prove that they don’t take themselves too seriously. On riotous track ‘ZZ Top Hat’, Ramsay gleefully exclaims: “‘I’m gonna spew in your ZZ top hat…boring music for boring people…silly music for silly people.’’ It’s as if she’s chucking a tantrum in the song’s record store context that soon turns exultant, and is being spurred on by the rest of the band and their instruments. It’s rollicking good fun and refreshingly opinionated.

Overall, Hot and Flustered is an album that barrels between hard-hitting political truths and satirical takedowns of popular fads, and it will leave you flustered in the best possible way. This LP is one of the more exciting punk albums to come out this year, alongside debut albums by Slum of Legs, Soakie, Chubby and the Gang, and Alphabetland by the legendary X. It’s reassuring to know that, despite all the uncertainty and bleak statistics of this year, the punk faith feels strong and certain with a band like Cold Meat around.