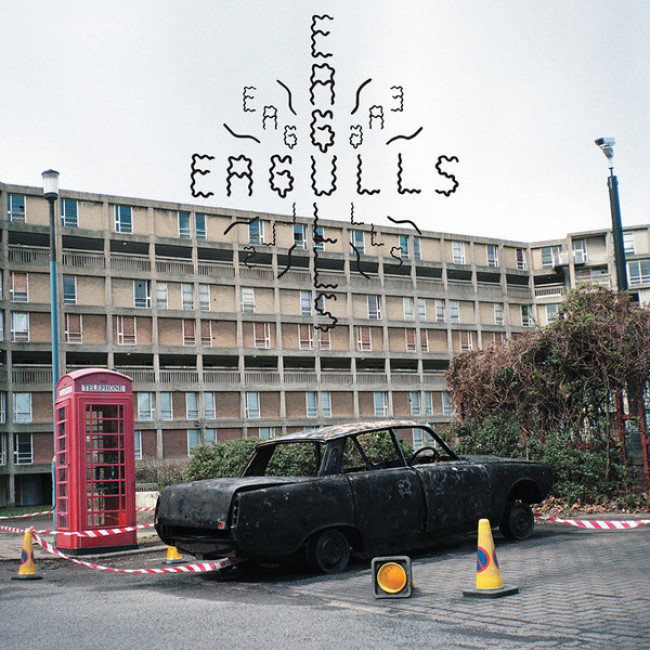 What? When did this come out again? Three months ago, you say? Oh WHO CARES. Gems like this ought to be dredged up again and again to save our souls from the marble-ogling masses.

If you pause to think about ‘em, you might pull the pieces together. But fuck that shit – who’s gonna pause and think about things when Eagulls are behind the wheel, careening through the ugly old industrial streets to god knows where, and you’re in the back seat, clinging on for dear life? (Seat belt’s broken, after all.)

It’s this year’s TRAAMS.* This year’s Hookworms. THIS YEAR, BABY.

If you’re wondering why I’m so late, it’s because I just bought this a week ago or so. I was suspicious, of course – no way the whole album could be as hypodermic as “Possessed”, which I still maintain is the best single I’ve heard on college radio (even if it does sound mighty like My Bloody Valentine). No way. But it’s even better.

They coulda picked any track from the album and maintained the same euphoric press hype effect. “Amber Veins” and its soaring, dripping sneer. “Footsteps”, my new fave, probably because it’s like Flat Field-era Bauhaus, but even LOUDER and FASTER and squarely in the harsh sunlight rather than the valley of shadows. YOU’RE THE PAIN IN MY NECK. (You can only quote Eagulls in all caps, or else you’re doing it wrong.)

This was the only video I could find for “Footsteps”, but I swear to ya it’s the best one yet. Yeah, the vocals suck, but you can just FEEL THE NOISE inhaling the entire room. This tiny, red-light-drenched bar seems a much more natural environment for Eagulls than that Converse-studded stage above, wouldn’t you say?

Now, I know what you’re thinking. Actually, I don’t, but I’ll ask anyway – why Eagulls over, say, Cloud Nothings, which some [close-minded, probably American critics with narrow horizons] will argue is the other contender for best guitar-based RAWK band this year? Simple – because Eagulls are better. Really, because “Opaque”, which mashes together Fugazi-ish vocals with a bittersweet dreamy guitar tone that almost takes ya back to early early New Order. SO DAMN GOOD, once you realize that the boys are bridging gaps you never knew existed, you’ll flip through it again and again to pin it down and break down crying because you can’t, you won’t, and it’s really OK.

But, most importantly, the closer. The end of days. Fuck Swans and their 30-minute grand life-and-death parables. Fuck Ben Frost and his static drone smoke machine. FUCK ‘EM ALL. Anyone who tells me To Be Kind is the album of the year is about to get their ass whooped by “Soulless Youth”. The Ruts + again, Fugazi + Hawkwind = POW.

Now, Bo Ningen vs. Eagulls? That’d be a vicious, vicious pit-fight and I wouldn’t dare attempt that match-up because everyone (including me) would crawl out of that pit all covered in gore and confetti.

Comparison time over. Reclaim yr youth and grab some Eagulls for the road.

* – This is really unfair to say since TRAAMS are actually coming back very soon, but you get the idea. I hope. If not, go listen to some TRAAMS, ‘cos they’re ACE. More anti-social currency.