excerpted from an interview with Damon Albarn of Blur, March 1996 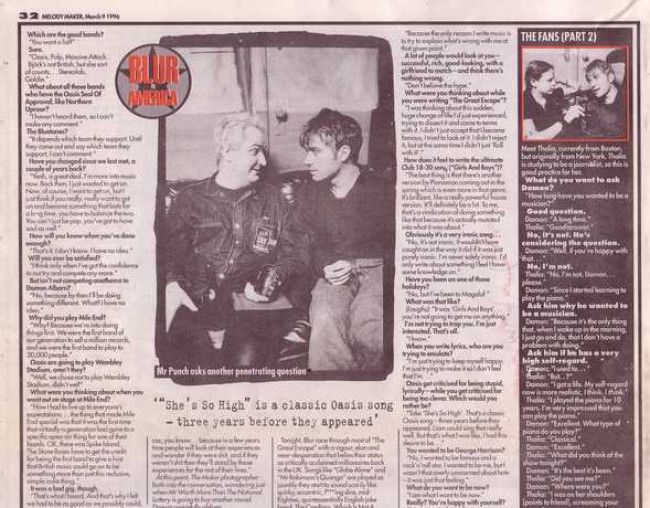 This is classic. I was – as I state near the start of the interview – “drunker than a barrelful of Graham Coxons”.

We waltzed into The Avalon Ballroom in Boston, straight into the dressing room, and demanded that Damon talk to us. I have no real idea why he acquiesced. Probably because he was bored, and we were so clearly obviously mightily pissed.

This exchange is great:

Tonight reminded me of one of your old U.K. shows from three or four years ago (circa Modern Life Is Rubbish) when you seemed to be on your way out.
Damon: “Yeah, but we changed the face of British music by being like that.”
For the better? You invented Britpop. Nice one.

But this one is even better:

How does it feel to go out with a girl richer than you are.
(Laughs) “That has so little to do with anything…”
Was that a crap question?
“Yeah.”
It was meant to be really clever.
(Laughing) “It’s not. “
So how does it feel?
“Well, my relationship with Justine was consummated before we even spoke to each other. We just looked at each other and I didn’t know fuck all about who she was or anything.”
I had a similar thing. I used to go out with a girl who was better-looking than me.
(In hysterics, on floor): “That’s hard to believe, Everett.”

In the photograph of the two of us – and I look a shocker! – Damon is looking at me in total disbelief, like he still can’t believe I’m there and he’s talking to me.

The side-bar entitled THE FANS (PART 2) is a corker, as well.

Meet Thalia, currently from Boston, but originally from New York. Thalia is studying to be a journalist, so this is good practice for her.
What do you want to ask Damon?
“How long have you wanted to be a musician?”
Good question.
Damon: “A long time.”
Thalia: “Good answer.”
No it’s not. He’s considering the question.
Damon: “Well, if you’re happy with that…”
No I’m not.
Thalia:  “No, I’m not, Damon … please.”

4 Responses to excerpted from an interview with Damon Albarn of Blur, March 1996