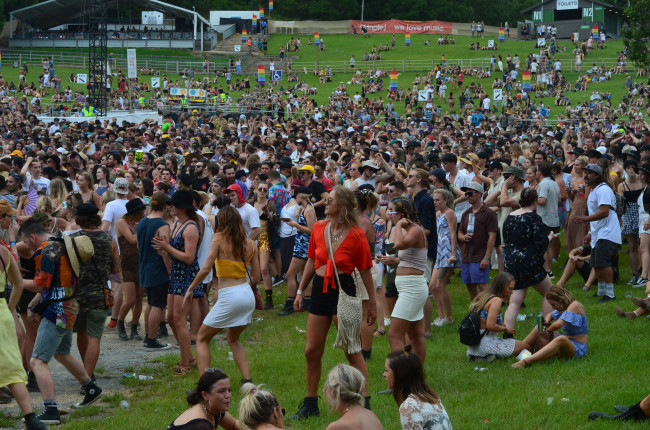 Rain. Again! Will it stop? F**K this, I can’t handle this place anymore. It’s destroying my sanity!

Live music but. There’s so much of it here, this event has been littered with moments that cut through the numbness and ennui of life and make it feel real. For me, 30 seconds of The Smith Street Band is all it takes.

Smith Street at the Valley Stage! These Melbournians have come from post-hardcore and arrived at somewhere at the centre of the rock. 2017 saw fanatical fans tattooing the group’s name across their bodies as they cut loose touring More Scared Of You Than You Are Of Me, their biggest album to date.

Rattling on about ‘The Smithies’ and the relationship between artist and fan can come off a little like one of those worshipful Bruce Springsteen pieces. Talking of The Boss (a.k.a. Brooce) it’s a valid comparison. ‘Death to the Lads’ and ‘Young Drunk’ are working class anthems which carry a genuine pathos.

At their worst Smith Street are a little pompous, but when they’re hitting their stride it’s poetry set to guitars. Whether its stage patter or in song Wagner carries a naked honesty in his voice. He invents his own beauty, living through example while struggling alongside the rest of us.

The sheer energy of this performance strikes a resonant chord. A punter attempts a ‘shoey’. Wagner, as ever, isn’t above lambasting a fool. “Look a shoey!” He mocks with a hint of hurt. “C’mon mate, it’s not 2014.”

They break into ‘Death to the Lads’ and the crowd erupts. This is what was missing at Fleet Foxes. Momentum! My faith is restored. In what I’m not exactly sure why but I feel good.

Next are Methyl Ethyl at the Forest Stage. Since signing with 4AD it’s been nothing but an upward trajectory for the group. My initial impressions of 2017 LP Everything is Forgotten weren’t as favourable as 2015 predecessor Oh Inhuman Spectacle. I’m still not sure if ‘Ubu’ and ‘No. 28’ measure up to ‘Twilight Driving’ but they’re all formidable works. The group feel like they’re becoming a little more geared for middle of the road, but there’s still that attractive middle ground between art rock and the outside pop of their label’s vintage.

Live my first impression is this: “Heck these guys have gotten big in like what? A year?” Again, I was a little drunk. It’s been two since their aforementioned debut. Their following is huge and those amongst them present are hanging off of every note.

Seeing this group on a massive stage is the clincher. I realise that, at least to date, they’re one of those rare acts that simply seem to amplify the bigger they become. So far, it’s been for the better. I’ve never experienced them as potent as I do now.

Liam bloody Gallagher! A generational symbol half-martyr to his own myth. I’ve enjoyed his re-emergence, but I mean all that “mumble, mumble, fookin’, mumble” routine can get a little much. A year of myopic Twitter feuds and pseudo-celebrity rants IN ADDITION to the past sins of Beady Eye? C’mon mate! Pull in the parka.

But the thing is that learning of an artist through their recordings there’s a tendency to forget the sheer impact of their music live. So, in order to find the truth, I’ve spent the last twenty minutes standing in the soaking rain. Surrounding me is a thousands-strong throng of blitzers, chancers and would-be groovers Torrential coastal precipitation is cooling things down everywhere else in the festival but in the natural amphitheatre, it’s still one hundred degrees. Hell on earth.

Gallagher opens with ‘Rock and Roll Star.’ It doesn’t sound like bad cover. Not at all, it’s loud electrifying and full of magnetism. I imagine this is every bit of what Oasis sounded like. Liam flings a surprisingly amount of older material out of the war chest and the crowd goes wild.

But this is no Oasis. Stripping away the sugar-coated nostalgia of the past, the newer material of As You Were comes on as a little more hit and miss. Yes, there’s some orgiastic hero worship breaking out amongst the audience. Sure, there’s moments of elevation, in fact, there are points where this set lifts off of the ground. But for me there’s no surrogate for Noel’s songwriting to feed the alchemy.

Liam’s own twisted persona imprints itself none-the-less. Does he have the power to matter to the world as Oasis once did? Like a true rock ‘n’ roller, he’s too coolly impervious to let you in on the truth.

For most ‘Wonderwall’ comes transcendent. And it’s here I find my conclusion to the Gallagher question. I realise that if Liam can continue to sing ‘For What It’s Worth’ especially verses like, “The first bird to fly gets all the arrows/Lets leave the past behind with all our sorrows/I’ll build a bridge between us and I’ll swallow my pride” with some semblance of conviction while delivering it all with a straight face, he’s going to keep making a lot of people happy for a very long time.

But at that I’m out. My mind is willing, albeit sanity a little frayed, but as I’m exiting the gate my body is crumpling into a jelly mess. It’s well past ten at night and again I’m climbing on to that damned tractor. I’m out of here. Next time!