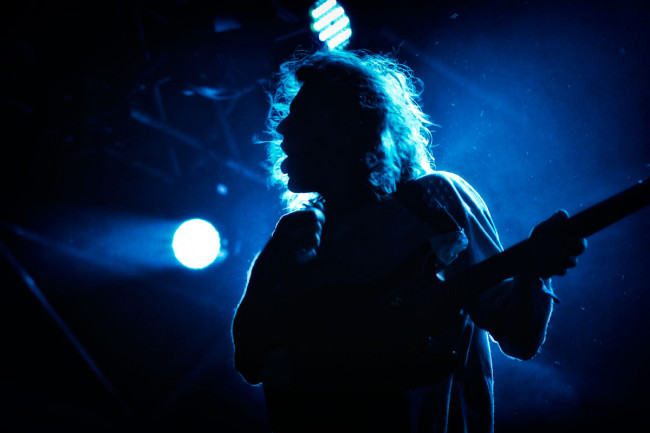 Rain. Wiping a small ocean away from my face I make peace with the realisation that this year’s Gizzfest isn’t something to be attempted sober. I slide a drink out of my pocket and into my mouth, wincing. Alright. Okay. All good, some pitch shifting reggaeton chugs out from the radio from a car that shelters me.

Hands grasp together a bundle of sunglasses, four-dollar umbrellas and whatever else is at hand. All clutched with the blind optimism they’ll be with me at the close of the night. I exhale and step out the door. With public transport and responsible driving slide beyond my comfort zone, I end up getting an Uber with a friend.

What I’m thinking at this point in time is this: Gizzology. Besides the basic five-albums-in-one-year PR hook, what really stands out about King Gizzard and The Lizard Wizard as a band? A few words flash through my head, something glimpsed in an interview with DIY Mag a little while ago. Talking about the group, frontman Stu Makenzie says something in the way of this: “It’s all just fun and games at the end of the day – it’s not super serious shit!” Not super-serious shit.

The Lizard Wizard aren’t the sort of shucksters which inform you they’re unravelling systemic social wrongs as egos spill and pockets swell. They’re a workin’ class rock outfit which, at the end of the day, meet their audience halfway. The Gizz are entertaining with the music they love. You could be forgiven for having a good time.

Gizzfest is their annual East Coast happening. Pulling up a set list informs the reader that as per previous years they’re bringing some overseas company along too. This time round it’s Seattle’s La Luz and Japanese psych outfit and Kikagaku Moyo.

Shaking things up they’ve also expanded the proceedings by throwing a melange of local talents into smaller ‘hut stage’ demountables. ‘Small’ meaning near-claustrophobic. Boiler rooms sans the DJs and instead accommodating multi-piece bands. It’s a little stressful for the groups but the punters are loving it. Catching some sideward glimpses of Madboots, Idylls, Flamingo Jones and Nice Biscuit throughout the night captures these local favourites powering through some chaotic yet excellent sets.

At the mainstage Kikagaku Moyo deliver sprawling instrumental jams. They look good doing it too. Afterword The Angels’ ‘Long Line’ rumbles out from a distinct PA. Buried deep after a lifetime of involuntary FM radio exposure, it’s a psychic cue to where the festival’s collective headspace is pulling.

Shifting throughout a healthy crowd reveals Gizz contemporaries The Murlocs spilling out some bluesy jams. Following on La Luz breeze through a standout set. Their music comes littered with airy reimaginings of doo-wop, ‘60s girl group and surfadelic sounds. As their licks throwback to Dick Dale, The Ventures as well as guitar pop like Santo and Johnny, the three pull together some impressive harmonies.

As the crowd swells towards the close of the night, patrons began making their own fun. Taller attendees crowd my vantage as Gizzard take the stage. Instantly recognisable despite having dropped only but a day before, Polygondwanaland’s ‘Crumbling Castle’ dominates the early set. It’s followed by ‘Altered Beast I’ from Murder of The Universe. Or is that ‘Altered Beast IV’?

The seven powers onward with another good hour of adrenaline riffs. Amidst the ceaselessly psychedelic cascade of the accompanying lightshow, the centre of the crowd devolves into its usual thronging mess. Others dance freely around the spacier outer limits.

Incendiary instrumentals continue to carry forth a hyperactive dirge of amphetamine chomping garage prog. Five LPs in one year, Christ. Ridiculous, but fun.