“Never kiss a Tory”: An interview with Peaness 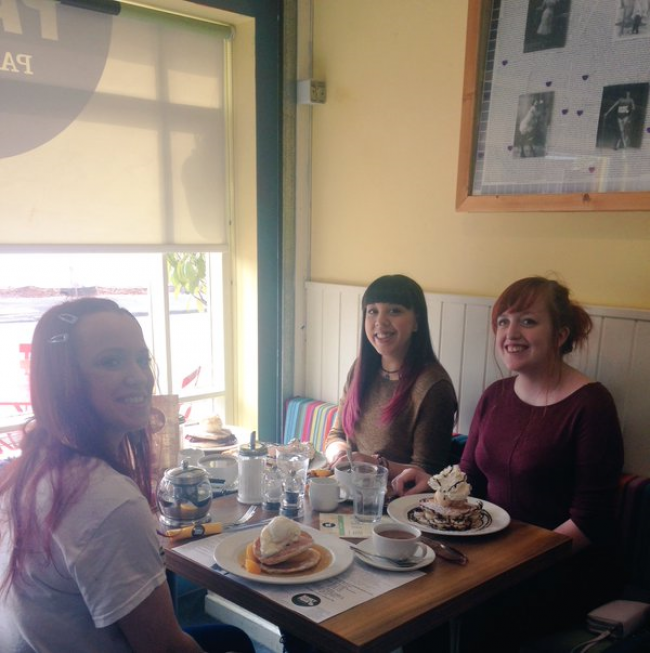 The first interview for the zine is with local band Peaness. I get to the pancake shop early with a tripod to set up the camera and test the sound. I get permission to film from the manager, promising to keep the swearing to a minimum and stay in the corner where we won’t film the other patrons. Peaness arrive and we all order these amazing scotch pancakes. I have mine with peaches, ginger, honey icecream and maple syrup. With our orders taken, the manager kindly obliges in turning down the music and we begin the interview.

HG: Do you mean Gideon?
Jess: George Osbourne.
HG: Gideon rebranded himself as George to sound more ‘down with the people’
Jess: It didn’t work.
Balla: Gideon? I think if he just left his name as Gideon, he’d be more down with the people. [laughs] Gideon! [Shakes her head]
Jess: So it’s about how much we hate him, basically.
HG: [laughs] How much you hate him?
Jess: Yeah. [laughs]
Balla: Basically yeah.
HG: I think this track is gonna be popular somehow.
Balla: Definitely with the budget as well and stuff like… after we voted and stuff like that.
Rach: We just got really wound up about it.
Balla: Yeah, we just got really wound up about how things turned out.
Rach: Tories…
Balla: And we were just like ‘right, George.’ [laughs]
HG: So are you quite a political band or do you just write about whatever you’re thinking about?
Jess and Balla: I wouldn’t say we’re a political band.
Balla: But we follow it. It does pop up.
Jess: We follow it and it’s obviously an issue, being the age we are.
HG: How old are you?
Jess: We’re all mid to late twenties, so it’s an important time to be paying attention to these sort of things because we don’t live with our parents anymore, so now all those things are actually things we now have to deal with so we’ve got to stay on top of what’s going on.
Jess: I’ve got my T-shirt today, that says (it’s a Los Campesinos! T-shirt) “never kiss a Tory”!
[HG zooms the camera in to get a good look at the image on the T-shirt, which is, quite mystically, an image of Cameron snogging a pig. Who knew how psychic this T-shirt would turn out to be huh?]
HG: Oh my God. How sexy is that?
Jess: Never kiss a tory. So er, you can tell, we’re not Tory supporters.
HG: Good. No Tory supporters allowed in the zine.
Peaness: No. [shake heads, Balla gives thumbs up]
HG: OK, thanks very much for coming. It’s been lovely to meet you.
Peaness: Woo hoo! [All wave]
Jess: Thank you very much.
Balla and Rach: Thank you.

The new single ‘Oh George’ by Peaness is out now via bandcamp, iTunes and Spotify.

And you can read more from Mother’s Pride here.