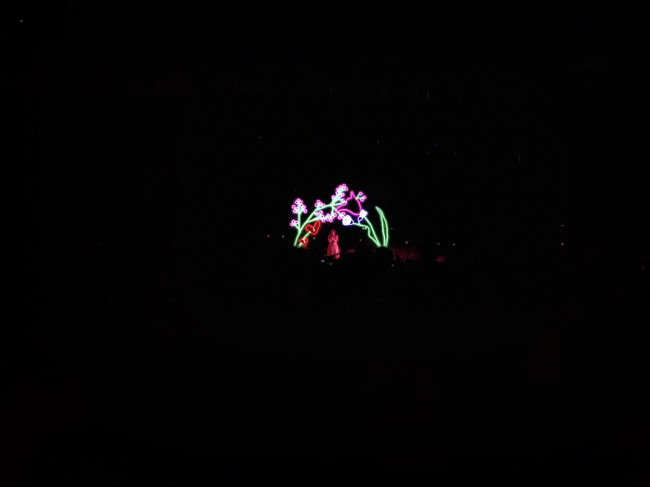 I was always planning to get tickets to see Lorde on this current tour.  The tipping point that got me into acting on my intentions was seeing the broadcast of her amazing Glastonbury set online.  For this festival appearance she performed in front of a shipping container-sized glass box that filled with dry ice and was lit up and in which her dancers performed.  It was such a simple idea but such an effective approach to performing a festival set in the early evening, one with minimal effort but one that elevated about the typical bare stage set-up you normally see at a large festival.  From the camera angles, it also looked like this large glass box hid the musicians at the back of the stage, allowing Lorde to be undivided centre of attention.

When the stage is set-up for Lorde’s show at the Riverstage, there is no large glass box.  As unfair and unjust as it might sound, this is a real disappointment.  Not just for what this simple prop provided from a visual point of view, but also because it feels like, as is often the case, the Australian shows in a large tour are being short-changed.  The Glastonbury show also included a trio of backing singers to provide the harmonies, and the from afar, it doesn’t look as if the stage has been set up to include any other vocalists.  Instead there’s two sets of keyboards flanking a drummer positioned in the centre.  This is a similar set-up to the one Lorde used at her Laneway shows back in 2014, where she was backed by a drummer, a single keyboard player and where all the harmonies and backing vocals were triggered, rather than being performed live.  It worked successfully at these shows but again, with Lorde performing with a full band at shows overseas, it adds to the initial feeling of Australian punters missing out again.

Tonight is a show of two distinct halves.  Maybe it’s the disappointments mentioned above but there’s something a bit flat for the first few songs, even though she opens strongly with ‘Homemade Dynamite’, before following it up with ‘Magnets’, the Disclosure song she sings on and then ‘Tennis Court’.

There’s also a slight personal disappointment in not being able to get a photo pass for the show.  This dissipates slightly when I catch sight of the photographers trudging up the hill after the end of the third song with their large lenses attached to the front of their cameras, having had to work with being positioned at the mixing desk rather than in the photo pit directly infront of the stage.

Six songs in, the stage goes black and a video intermission is played on the big screens to allow a costume change.  Costume changes are a personal pet hate as they almost always kill the momentum of the performance and, given the start to tonight’s show, it feels like the last thing the night needs.  However, I’m proved completely wrong as this is the turning point and a moment that completely changes the night.  The intermission also allows time to change the stage set-up, with some new neon lights that form a central arch of flowers added to the stage.  They’re no big glass box but they provide a much improved stage set.  There’s no real reason, but these small changes make a massive difference to the entire performance, and from this point forwards, the show is a complete triumph.  An addition improvement is that at some point after this, the sound gets a lot louder and the bottom end is also greatly amplified.  This also happens a second time in the last quarter of the night, which begs the question of why did it take them so long to fix the sound?  Obviously this played a big part in the flatness of the first half dozen songs and in retrospect you can’t help but wonder about the missed opportunity to present the show as it was supposed to be from the very start rather than almost half way through the evening.

The second act, again six songs, includes a snippet of Powderfinger’s ‘My Happiness’ as part of an extended introduction into ‘Liability’ before a cover of Springsteen’s ‘I’m On Fire’.  They’re interesting choices of cover songs, following a seemingly familiar pattern, which includes the Hunters & Collectors cover at her first Sydney show, of paying homage to classic songs that she grew up from via her parent’s generation taste in music rather than dropping in some more contemporary songs.

After ‘Sober II’ and Pure Heroine closer ‘A World Alone’, there’s another video intermission to allow another costume change and changes to the stage set-up. It doesn’t impact on the flow of the show and the final third continues in the same triumphant vein as the second act of the evening.  You could say that Lorde pulls out all the big guns for the close – ‘Supercut’, ‘Royals’, ‘Perfect Places’, ‘Team’ and ‘Greenlight’ and but this is just is testament to the embarrassment of riches included on the two albums she’s released to date.

In the last few days I’ve experienced a degree of awkwardness associated with all the Album of Year polls that have been published so far all including Melodrama towards the top of the lists, if not in the number one spot.  I hadn’t realised it had been received to the level it apparently has been and that probably says as much about the lack of album reviewing in the Australian music media in this day and age as it does about me not paying much attention to the established music press because of its noticeable decline in quality and effort.  Ultimately, Melodrama is one of the few albums I’ve really loved this year in a year when it feels like there’s been a lot of 7/10s but very few 9/10s or 10/10s.  It’s just been a bit of a surprise finding out that I’m not the only one who has rated Melodrama so highly.

Given the surprise of finding out the music press’s adoration of Melodrama, it’s also slightly startling finding out the cross-over appeal of Lorde at this show.  I’d never really fully contemplated her as a bona fide mainstream pop star but it’s clear from the size of the queue for the Under 18 entry gate, and the high pitch screaming from the front, that she’s much more than the cool indie singer I had mistakenly taken her for.

There’s a lot of between song talk, and unlike so many musicians, it’s a skill she really excels at.  There’s always been ridiculously assured and confident about Lorde, even when she was first breaking as a sixteen year old, and nothing has changed in these last few years.  As well as jokes about the food stands located at the top of the Riverstage hill, she also provides life advice for crowd.  Although there’s one part of you that can’t stop thinking “Ella, your’re 21!,” her words are so genuine that you can’t help but be taken in by them.  It’s the same emotion when she talks about having to write the follow-up to her debut album.  There’s such an honesty and down-to-earthness about the way she delivers her words, even though it’s probably something she trots out at each and every show, that you never think for a single second that it’s a rehearsed moment or that she doesn’t really mean them.

Back in early 2014, I wrote of her Laneway set (where she played second fiddle to The Jezabels on the main stage) that ‘From start to finish, you just can’t take your eyes off Ella Yelich-O’Connor, it’s just a complete performance’.  Fast forward the best part of four years and that conclusion hasn’t changed one bit.  Two albums in, and as 2017 draws to a close, I’m so excited by Lorde and everything she does.  I can’t wait to see where she goes to next.