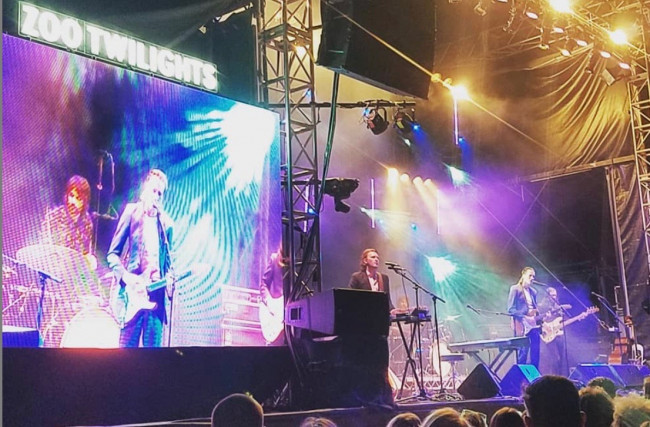 Another month of Zoo Twilights concerts is almost a wrap, with Marlon Williams, supported by Laura Jean, as the penultimate show.

Laura Jean and her band arrive on the stage at dusk. I’m not familiar with her music, and she takes a couple of songs to warm up, but her laid-back banter, beautiful voice and 80s-style saxophone are pretty likeable. She plays half an hour of material, mostly off her recent album Devotion (Chapter Music). Her vocals at times are celestial, her high range pure. The catchy ‘Girls on the TV’ gets the crowd dancing early and is particularly popular with the kids in the crowd, “…she could always dance better than the girls on the TV…”.

Laura is a good choice for this concert falling on International Women’s Day. She’s an impressive Australian singer/songwriter and clearly no conformer or female stereotype.

Just on dark, Marlon Williams appears, suited in royal blue and wearing a slicked-back mullet. Initially solo and acoustic, he’s joined by The Yarra Benders as they launch into ‘Come To Me’ and ‘What’s Chasing You’ from last year’s knee-weakening Make Way For Love (Caroline Australia). Despite their almost constant touring, the band’s energy and camaraderie is still high.

The sound at the zoo is great and the vibes all melty happy, even if William’s songs are largely tragic. Lost love and jealousy pour out of him like the smoothest but most bitter dark chocolate. ‘Dark Child’, from his debut self-titled album, is a highlight, with its ripping instrumental crescendo from the band when Williams leaves stage for a breather. ‘Vampire Again’ is always fun and I’m pleased to say this time he does break into his lanky vampire dance. ‘Nobody Gets What They Want Anymore’ brings silence to the large crowd, just relishing in this song’s sublimity.

The Yarra Benders must get credit for being inherently part of the ‘Marlon Williams’ phenomenon, as they are so integral to his sound and his performances. Williams will always have the voice (no superlatives can do it justice), but the band provide the structure – perfect back up vocals and the coolest grooves. It’s always an absolute pleasure and suffice to say, I will never tire of seeing him, and them, live.