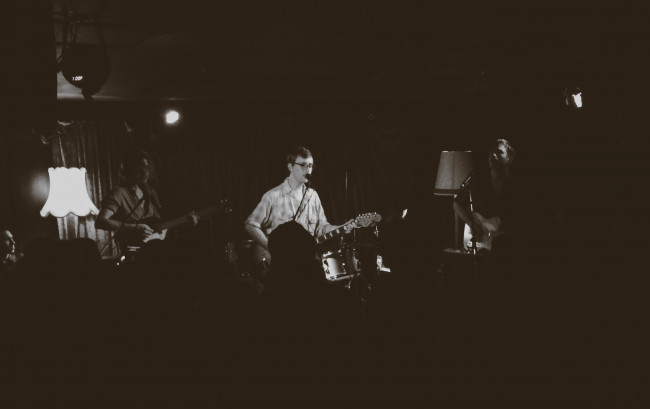 Navigating Fortitude Valley on a Saturday night with sober eyes. Now that’s something new. The rain, my sludge-soaked Converses, trudging pantiless (for all the wrong reasons) through a sea of fake tans, tight dresses, and shoes that were painful to look at.  Equally sobering was making my way to the venue. Black Bear Lodge, tucked away between drunken food stops and flashing club lights, was dark, small, and easily missable. After finally finding the door, I made my way up the stairs and to the bar. I immediately ordered an espresso martini.

While growing up in the States, I had experienced my fair share of concert venues. On the hierarchical ladder, there were the hanger-ons and excitable concert-goers. A few rungs up, you had the bartenders and maybe the guys working the lights (if the venue had lights.) Higher up appeared the bouncers, who made sure you didn’t squeeze yourself too close to the stage, God forbid. Finally, at the very top rung sat the Band. No matter how small the venue, the hierarchy was a ubiquitously accepted and unspoken understanding: the concert-goers didn’t work the lights, the guys working the lights weren’t as close to the Band as the bouncers were by physical proximity, and the Band was untouchable.

Although it’s unclear whether it was Black Bear Lodge or Saturday’s gig or Australian concert culture that deviated from my unwelcoming North Eastern American live music experiences, I was pleasantly surprised to spot band members, friends, even what appeared to be MOPR’s vocalist Sam Cromack’s immediate family hovering besides the bar and among the audience.

Taking the stage prior to MOPR were Brisbane-based Mid Ayr and Machine Age. Mid Ayr, including The Trouble with Templeton’s guitarist Hugh Middleton in their ranks, made me nostalgic for my Radiohead phase. This was back when all I really enjoyed doing was wearing black, sitting in my car, and listening to OK Computer. Their new single “Letting You In” was a pleasure to hear within the raw acoustics of an intimate venue, especially after listening to the studio version. Within the wooden confinements of Black Bear Lodge, drummer Zach Moynihan’s cadenced rhythms gave energy to bassist Alex L’Estrange’s reverberating notes, captivating Saturday night’s audience as loyal fans sang along with Middleton.

(Please kill two birds with one stone and check out their fantastic music video?!):

Machine Age sounds like the name of a great or very terrible heavy metal band. Instead, it’s the moniker of Cairns native Adrian Mauro, the vocalist, guitarist, bassist, and electronic drummer of his own one-man indie rock band. Mauro, with his nonchalant confidence and undeniable talent, quickened the pace of Mid Ayr’s softer tracks with his surprising, building, and eventually roaring performance. If I could, I’d ask him what his influences are, because I can’t pin down any other artist with a similar sound.

Despite Saturday starting off with a hangover and terrible news from Paris, it wasn’t hard to remind myself why I was excited for this gig. Sam Cromack, upon releasing Goodlum under his solo moniker My Own Pet Radio, had revealed in a recent interview that “the album is probably annoyingly eclectic, but I wanted to try everything I wanted to do and not make any compromises.” True, while some artists become desperate in their attempts to create an album that heavily departs from their last, Saturday’s gig proved Goodlum to be far from that; Cromack’s intentions proved to be genuine, as Goodlum seems to be an organic product of Cromack’s talented identity rather than made solely for the sake of eclecticism.

With Mid Ayr and Machine Age doing a terrific job of complementing each other and the main act, and I was excited to hear what MOPR’s more instrumental-heavy pieces such as “Don’t Press Send, Companion” would sound when played live. SPOILER ALERT: it was incredible.

The rhythm of the set list was beautifully engaging; equal parts eclectic (not annoyingly so, Sam!) and comforting, much like Goodlum itself. My Own Pet Radio’s energy was undeniable as Ben Fahey’s keyboard notes and Alex L’Estrange’s bass guitar rhythms soared through the stage to complement Cromack’s vocals and dynamic guitar lines. Even more so endearing was Cromack’s earnest performance being met with his bandmates’ off-mic singing and enthusiastic jumping, particularly on Fahey’s part. MOPR effortlessly incorporated older songs such as “Having Such a Good Time” and “Altman Speedway” from their first album, Unidentified Flying Collection of Songs, with the new songs from Goodlum, the instrumental-heavy “Don’t Press Send, Companion” and the album’s title track impressing and contrasting with the vocally-focused “No Great Mystery”, the softer “Tangible Heart” and the more intense “Enemy/Memory”.

I wish I could tell you that there were weaker songs. There weren’t. The highlight was the slightly bolder performance of the “Fight Club”-inspired “All Colours”, a track incorporating Cromack’s intimidatingly powerful and raw vocals (which Cromack admitted afterwards had made him nervous).

Cromack ended the night with a cover of “Yard of Blonde Girls,” best known from the version included on Jeff Buckley’s posthumous second album, Sketches For My Sweetheart The Drunk. It was such a perfect finish that I wondered if maybe forgetting underwear to this gig was more purposeful than accidental.