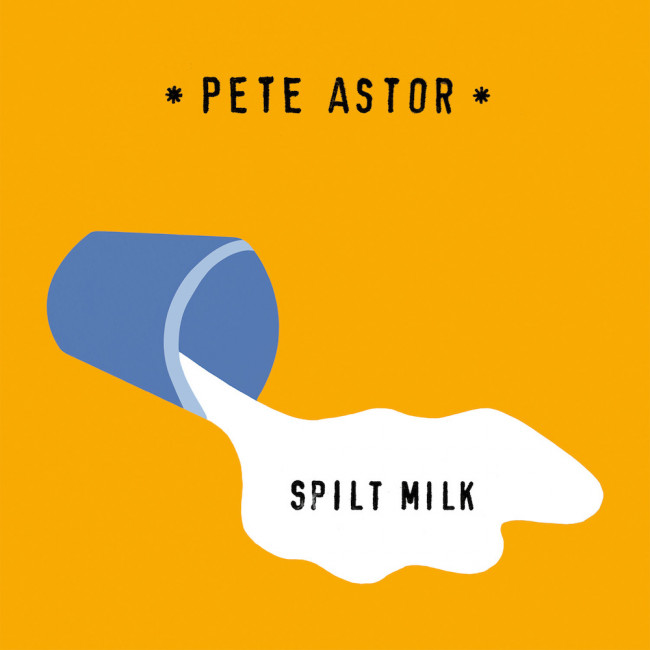 Oftentimes, when I’m given a list of albums I could review, I’ll pick some names that I’ve never heard before. Now, in a legit music blog like Drowned In Sound, I have to pretend that I know something about the artist, and thus drudge up some “research” listening. But I figure, first impressions count when we’re silently judging each other – we can choose who to hang with, who to hire, who to trust in a matter of minutes. So why not evaluate an artist after only one album?

I have here a Mr. Pete Astor, which the presser tells me I should know from a number of indie pop bands and the man’s own illustrious solo career. Supposedly, he’s one of those singer/songerwriter types, too gentle to swat a fly (or just not agile enough, one can never tell), who talk about the World We Live In with Wit and Humor. You know the type. And this Spilt Milk is, from what I gather, an Ithica sort of album, the resting point after a long journey across the genre spectrum.

From the first few listens – well, my first thought is that the whole shebang could’ve been lifted straight from the Velvet Underground’s 3rd album, what with the scrappy drums and simple acoustic strums and even simpler confessions. My second thought follows: Mr. Astor must be the type that people don’t bash. Because, well, who’s ever been harmed by an indie pop band? Thousands clutch to these records for the infinite light and sugar that they provide, the windows of love gained and lost through which men and women can look (particularly when they’ve experienced neither – hullo me one year ago when I bawled over a Fireworks song). Why question such a benevolent force?

The problem is, some writers can write better songs than other writers – and by “better”, I mean songs that convey more complex emotions, tell more gripping tales, employ more impressive vocabulary, or just sound more interesting. Consider “A Very Good Lock”, which of course isn’t a physical lock, but a metaphorical one that keeps our protagonist “really really real”. Astor sketches the scene as if for a newspaper comic strip – oh tra la la, I’m home and I’m a drunken bastard, so I must’ve done something really regrettable! Only my reputation is at stake for this horrendous thing I’ve done, whatever it is!

And so the album goes. “The Getting There” banks on a series of signifiers that relate to travel – train stations, a river, streets at midnight, history waiting for us – without any inkling of where the protagonist is going, or why, or indeed why we should care after we’ve acknowledged the whole archetypal journey to the unknown conceit. Bunches of songs attest to the glory of the domesticated female partner in the most elementary terms possible: “you’re really something, / and that’s just the way it is”; “when I get home, she’ll understand”. In “Good Enough”, Astor even tries to belittle household chores like fixing lights and sorting out gardens to express (poorly – “the good days / oh, the good days” – as that were enough to evoke the caresses, the in-jokes, the silly arguments, whatever quirks couples share together that keeps them together) how much he loves spending time his wifey. Instead, he sounds like my dad, who winds up watching TV all day, then snaps awake and devises some reasons for not doing what my mom asks him to do, using all his manly authority to make himself correct.

I listen again to such asinine, wimpy jangle, and I wonder for just a second if my heart – err, or the portion of my brain that establishes empathy for me – has shrunk three sizes. But no! Modern songwriting doesn’t have to be this way. From just 2013 onward, I can think of plenty more moments where I’ve collapsed on my desk or my steering wheel, overwhelmed by joy or tears – Withered Hand’s New Gods, Laurence Made Me Cry’s The Diary of Me, lots of Darren Hayman, David Thomas Broughton, Jack Hayter’s year-spanning Sisters of St. Antony project, that last Chills album, and of course the aforementioned Fireworks, and now my head’s spinning with crystalline voices, intricate guitars, flashes of feeling, and other wonders that just don’t happen on Spilt Milk (even though Hayter does play steel guitar once, which is cool).

Now, indeed, I am looking at a snapshot of Mr. Astor here. But if the man did pen more inspired tunes in earlier years, this “back-to-my-roots” record doesn’t encourage me to dig for them.