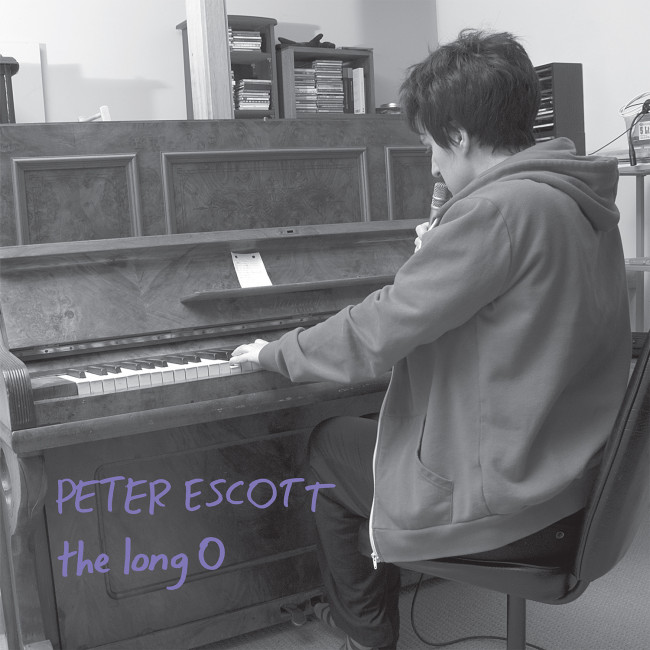 Right-o. We need to sound out this love thing a little more.

First off. You might recall that, some months back, I dithered over the electric bedroom project Scraps. Now, I’m gonna tell you that this is another bedroom project.

The question isn’t girl vs. boy. It’s about craft. Scraps, for all its patchwork charm, was still a shallow thing. Snap and color, beat and words.

I might tell you that I’m in love with Peter Escott, but that’s not true. I don’t know the man, only the “user-friendly” electronics he’s jiggered on The Native Cats and his voice, a channel for summoning deep-seated fears and passions.

What I mean, perhaps, is that The Long O, more than anything, resonates with this hazy, distant, intangible aspect of love that’s seeped into my brain lately like an unknown gas leak from a factory 50 miles away. Saccharine it is not. Linear it is not. Insular, yes, but not insular as most solo projects may be.

“A16” trickles in like a spirit stuck on this earth. A particular spirit – there’s a live set of OMD, tacked onto the end of Organisation (or was it Dazzle Ships?), that sounds every time like nothing else on record, like no one else was there, as if hecklers didn’t exist and crowds didn’t, either – as if rock itself had sputtered and died 20 years ago and synths had to build up music again, block by block, and at this moment only the naked grey cinder blocks had been stacked.

I can’t find that gig now. But it couldn’t have been a dream, because “A16” sounds just like it.* Except Escott wrote words, words to echo the isolation, and the reaching out to others in isolation, and how much one’s very life depends on something to CLICK. “Mealymouth”, too, summons that haunted bare foundation, too, and not just for nostalgia’s sake. Escott lays himself bare. I’m yours. That’s not a fact, but an offer. Take me. Go on. But only when you’re ready.

See, this is why The Long O has enchanted me – Escott doesn’t hide himself under his compositions. Nowhere to hide, anyway, not behind these simple chords. Remember, how Tiny Ruins demonstrated that “I love you” is the most fragile branch to hang yourself on? Escott gets that, too. “My Arm is True” is another offer, another I’m yours –

– a leveling of the self. A physical thing, stripped of ego, gender, or any ability whatsoever. The sole synth that accompanies this invokes all the quiet, solemn awe of a hymn played in church. That hallowed feeling blossoms on the next track, the organ-backed “I Believe In Devil’s World”, a masterstroke of understatement.

Really, the more you spin The Long O, the more you grip the very personal Christian references within. Funny, innit, how trite the notion of angels and God may seem in 21st century songwriting, especially now when the literal fear of meeting the Devil and being dragged to Hell has cooled considerably. But Escott doesn’t buy the old stereotypes – “No one ever really has the dreams you say you dream”, he says on “Angel” (another lovely baring of the soul, by the by).

On “My Heaven My Rules” – a commanding piano ballad – religious and romantic devotion intertwine:

Now, I’ll repeat – I don’t know the man. But from this, I gather we’re both the types that, on a daily basis, think much more than we speak. I also gather that neither of us believe that we can “own” anyone – it’s not a matter of “claiming” your significant other, of seizing, but of giving and receiving consent. I’m yours – will you take me? Real relationships hinge on both parties’ free will, says Escott – and yes, I think I love him for that.

So. The Long O doesn’t demand your respect. But it does ask for patience. Give it time. Escott can wait. He’s already proven that. Those who do will find a love that outlasts the ever-churning hype behind the trend-coasting buzz bands.

One Response to Peter Escott – The Long O (Bedroom Suck)