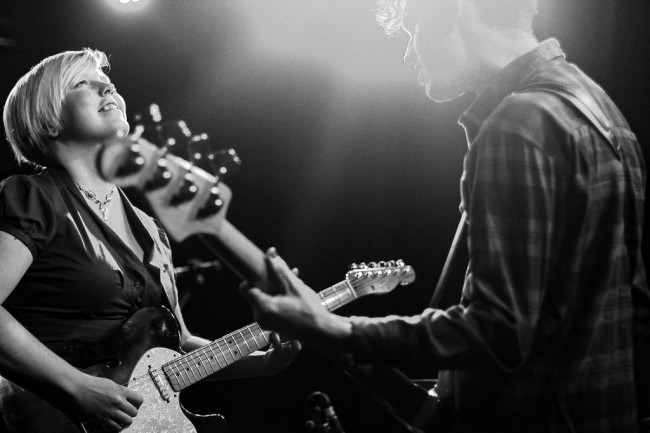 Cable Ties hold a special place as one of Melbourne’s most beloved bands, one in strong pedigree of fearless rock acts that are seemingly constantly shattering the boundaries of what you think they may achieve.  In February, they’ll join artists like The War on Drugs, Aldous Harding, and Anderson Paak, in touring Australia’s Laneway Festival. We had a chat to the bands singer and guitarist Jenny McKechnie preceding the festival.

This year at Meredith, there were a few instances that kept reminding me of Cable Ties – Amyl & The Sniffers opening the first day with their female-led punk, Downtown Boys and their impassioned political statements. You really left an impression on the history of that festival I think – do you look back on that opening set as a key moment for Cable Ties so far?

Yeah absolutely. We were totally blown away when we were to play at Meredith. We had all been going for years (it was Nick’s 10-year anniversary of attending) and had never expected to play, let alone open.

That opening slot is so special. Amyl and the Sniffers absolutely nailed it. Amy (the front woman) has such a captivating stage presence, I just love how she absolutely owns the space, she’s a bloody legend!

Downtown Boys set was incredible, impassioned as you say and very moving. I found myself in tears…which actually also happened during RVG and Aldous Harding.

You’ll be lending your tunes to Laneway Festival come February, outside of your set though, who are you most excited to catch?

I think the Australian talent is off the charts at Laneway! Miss Blanks, Baker Boy, Jesswar, Spike Fuck, Rolling Blackouts CF and Lucy Cliché are on permanent listening rotation for me at the moment.

Laneway have done a great job of being onto a bunch of new and really exciting Aussie artists. I’m also super excited to see Aldous Harding again… and The Internet!

You’ve spoken in the past about doing your best to not get taken advantage of by touring companies that just want a cheap opener that’ll bring all the gear and provide their own sound-person, etc.

Do you have a method for avoiding that kind of stuff? Tips for other bands perhaps?

We’ve just learnt to be super clear about what we’re being paid, what is being provided to us and what we are expected to do. When we have that information, we can assess whether we’re going to feel good about the experience or exploited by it.

It takes a while to learn that your art is something you pour a lot of energy into and you shouldn’t be expected to perform for practically nothing just so a touring company can say they booked an opener.

Your art is work, if you’re playing for a big touring company for no financial reward not only are you wasting your time, you are also setting a precedent whereby other emerging bands won’t be paid for their work.

Tally up your transport costs, sound costs and other shit you’re gonna have to buy, deduct it from the fee they’re paying you, work out whether you’re actually going to enjoy the experience and then make a decision.

Camp Cope’s recent statement at Falls Festival has encouraged in another wave of support for diversifying event line-ups, but I feel like this conversation has been happening for so long, not always getting the attention and action it deserves.

Do you ever feel cynical about the broader musical community embracing diversity in ways that are more talk and less action? Or does it read differently to you?

I think there is definitely a danger that some parts of the music industry might use DiversityTM as a marketing strategy. If that’s all it is then it will be forgotten like the next ironic hat trend.

We don’t need to have any more ‘conversations’ about the fact that festival line ups are dominated by white, cisgender men. We know it’s a problem and bookers need to address it without expecting accolades, monetary reward or to be seen as progressive.

If those with power in the music industry want to make meaningful change in this area they shouldn’t be telling us about it, they should just be doing it.

Aside from your own hard work and talent, what do you think gave Cable Ties such a strong rise over the past couple years?

All the help we’ve got from Poison City, other awesome bands like Camp Cope, Jen Cloher and The Peep Tempel, and Joel and Liam at The Old Bar. We also come from a very strong feminist, queer music community that has made us the band we are today.

Also, Bakehouse studios… the list goes on! There’s a heap of supportive and wonderful people who we absolutely would not be here without.

And finally, since it’s still somewhat relevant, what are some records or artists out of 2017 that left a lasting impression on you, any recommendations?

Holy shit what a huge year for music!

Reclaim Australia by A.B. Original is one of the greatest and most politically significant albums in Australian history.

A Quality of Mercy by RVG is a devastatingly good record. Jen Cloher’s self-titled record is also exceptional and the live performance of it is expansive and exhilarating to experience.

Ooh I almost forgot that D.A.M.N. came out this year… bloody hell!