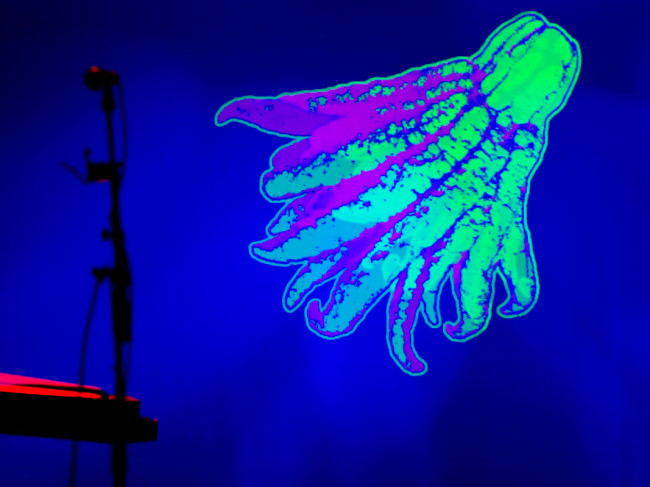 As a body of music, The Velvet Underground and Nico remains a moment of beauty, rawness and twisted innovation. With 2017 being the album’s 50th anniversary, Regurgitator alongside the minds behind Brisbane Festival bring the celebration to the Tivoli. Despite claiming to have taken a slightly interpretative approach to the Velvets’ debut, the set plays out with an energy and excitement close to the original. That said the flair and efficiency of this command performance takes the place of the inspired amateurism of Lou Reed and his co-conspirators.

‘Sunday Morning’ kicks off with a light touch before the five tears into ‘I’m Waiting For A Man’. Both are met with roaring applause. ‘Gurg collaborator Seja stands in for Nico on ‘Femme Fatale’, ‘All Tomorrow’s Parties’ and ‘I’ll Be Your Mirror’. Inhabiting the part, she really shines. These detached vocals and a cinematic stage presence accompany mind-bending visuals.

The pulses and drones of ‘Heroin’ are, for a split second at least, mesmeric. Again, the visuals add another dimension of fantasy and polaroid art world feel. Standing in for John Cale’s viola, Mindy Meng Wang’s guzheng, despite taking up the majority of the stage, is tastefully underplayed.

‘Waiting For A Man’ comes cast against a liquid light show and with a pummelling bottom end. Reed’s streetwise lyrics carry something anthemic. It’s a complete poem for its times which still resonates today. For all the Velvets’ avant leanings they lent on a foundation primitive pop. Along with ‘There She Goes’, ‘Waiting For A Man’ showcases the bubble-gum popcraft Reed perfected cutting his teeth at Pickwick Records.

Two successive blasts of fury, the loop-driven ‘Black Angel’s Death Song’ and freeform ‘European Son’ see the group cutting loose on their own creative whims. It counterbalances the grit and urgency the originals have lost to time by amping up their degenerate form and unpredictable edges of excitement. These closers come on so primal, abrasive and outside of the norm any purist couldn’t help but approve.

Things stay short and sweet. Energy seems to have been building throughout the set but never reaching a bliss point of total abandon. There’s anticipation for an encore which never materialises. C’mon guys!

Lou Reed was always looking to kill popular cliché while expanding the idea of what music could be. Leaving the gig there’s reaffirmation of the feeling that he won. This dark and sleazy yet honest depiction of deviance and street hustle has become a torch bearing album, a seminal work as well as a lodestone of modern music.

When it comes to Regurgitator’s Ben Ely and Quan Yeomans themselves, the pair haven’t had a whole lot to do with The Velvet Underground. Neither were fishing one of the 30,000 copies of the Velvets’ commercial turkey out of the bargain bins back in ’67. As a pair of Brisbane adolescents coming of age in 1980s they couldn’t have been further removed in space and time from the New Yorkers’ inception and inevitable disintegration. Yet when it comes to the music of The Velvet Underground and Nico itself, they’ve sure as hell felt it and that is almost certainly the point.