Sonny & the Sunsets – Talent Night at the Ashram (Polyvinyl) 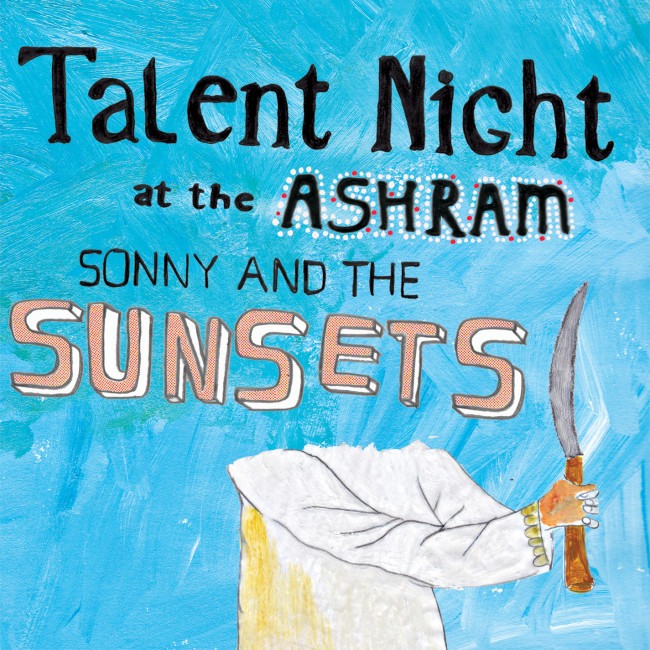 I didn’t care for the first album, the slavishly 50s garage stomp one, and couldn’t see how anyone could choose you over, say, that dude from Unknown Mortal Orchestra as one to fall in love with. And I didn’t even bother with the one that everyone called your “country album”, because that sounded dull. But Antenna to the Afterworld was great! Silly and catchy and funny little synths like toy UFOs dangling on strings. And love songs about androids that bled green blood. You were still an imitator, but holy hell, what wholly hummable imitations.

So here’s the next one, yeah? The presser said you’re dabbling even further afield than ever, and dropped the psych-tag for good measure. Which is to say, you’ve still got that bouncy, carefree Beatles-y pop schtick going on, and your piddling toy synths. And don’t get me wrong – I love the toy synths.

But look, dude. Before we go anywhere, we need to talk about “Happy Carrot Health Food Store”.

I get what you’re trying to do – you’re evoking a place that your hipster audience is all too familiar with and blowing it up into a “Lucy In The Sky With Diamonds” sort of acid trip. I don’t mind the seven-minute stretch. The characters you draw, though – “Wayne at produce can tell her, he knows a thing or two / about everything and what to do.” Oh, that’s great. Everything. So descriptive. Thank you. The song trips about in its lollygagging way, building its hermetic panorama of half-sketched store employees – and then there’s the dialogue, wherein a screenwriter (you?) describes a scene of a character talking to a guy swimming in her beer, as his bewildered dog looks on. What on earth is that for? Absurdism for the sake of absurdism? The whole “oh look, here’s all the hipster folk that work at a health food store” setup was rather pointless in itself, but this stretches my patience. I keep telling myself that this could very well be yr prog breakthrough, but I still can’t tell if you’re making some higher-level observation of society or just pulling a Malkmus and being sarcastic and lazy for yr aesthetic’s sake.

Anyway. Rant over. Promise. I wanted to bash ya for wholesale theft of Kinks-like (that is, Village Green Preservation Society-like) rambles, but “The Secluded Estate” is too damn catchy, and “Baby Jokin” jangles with just the right Byrds-y tambourine breeze. Also, fantastic job on the downbeat ditty of the title track – something about the low-key organs and drums falling down drunk over themselves while the guitars duplicate has this casually surreal Procul Harum vibe to it, and I don’t type that very often.

What saves you, Sonny, is how much AND how little you embellish melody. I’d normally write off a soapy ballad like “Icelene’s Loss” as too saccharine, but something about how just the violin and flute wrap around the simple little ditty, and the way you throw around your words…damn it, you make me smile, man. It’s like finding a crumpled-up Jim Croce song in the trash can.

Your most striking tunes lie at the end, though. At the front, “Cheap Extensions” grooves for once, like the Moody Blues could do on Seventh Sojourn – but this is no deep psychic catharsis from the misty mountains, no. This is yr basement black light party. The bass line chugs all slick-like, slicker than any of your other lollygags, but that lovely flute sprite and twangy guitars keep it loose. On the back end, “Secret Plot” seals the deal with swagger, a hunk of a Grease-y leather thing – laced with, of all things, flighty parlor piano solos.

That’s why I like ya, Sonny. Your looseness. You let your music tumble down blippy rabbit holes (“Blot Out The Sun”), and trip along on cheesy harmonies and sitar strums (“The Application”), and stumble into all kinds of queer, quiet combos. Yeah, Talent Night does tug at my memory a bunch, but the tunes stick, and that’s what counts.

Thanks, bub. Just keep everything snappy next time, eh?

PS – You can pre-order this sucker here.