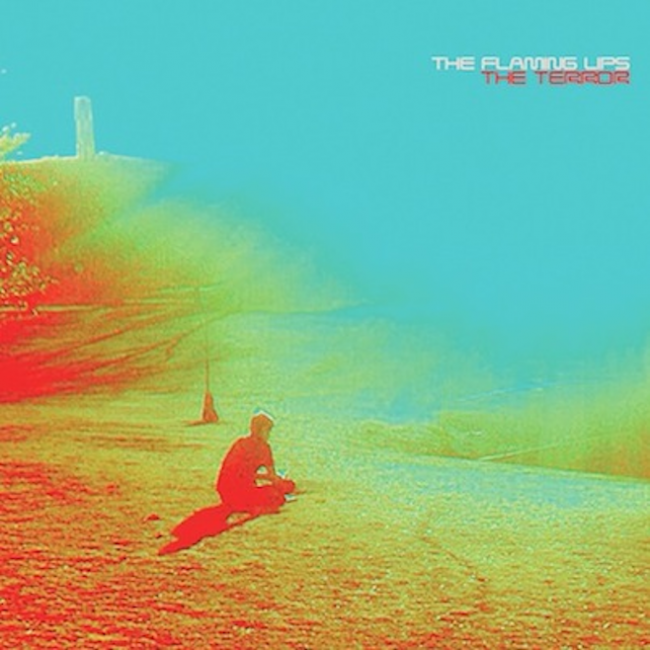 Wayne Coyne is involved in my daily life. Mainly it’s when things go wrong. When I pull up to the T-intersection at the end of my street in a hurry to get somewhere and, suddenly, a hundred cars in a row drive past and block me, that’s Wayne: he’s behind a tree a couple of hundred metres down the road, yelling into his megaphone, “Okay ev’rybody, time to go-go-go! Ben’s drivin’ up there and we need to teach him a valuable lesson!” He pulls the siren trigger, *bweeeeEEEOOOOOOOoo*, and waves them all on energetically. I want to fume but I know he means well and I understand the point. When I arrive, panting at the bus stop just as the bus is pulling away, I see the back of Wayne’s curly head whispering into the driver’s ear as he entertains the passengers with a hand-puppet. When the last bananas are gone, or I can’t find things in my house, or the wireless connection won’t work just when I need it, I put my hand to my forehead and find it wet with blood: “Wayne”, I think, and then I hear his Okie voice in my head: “You can do it, man! You gotta take the good with the bad! The joy of life is in overcoming! Keep going!!!”

This has been happening for some years. I think it’s imaginary. When I told my friends about it, I realised this was probably how people invented God. But even though I’ve taken it to an extreme, I know I’m not the only person with this kind of image of Wayne Coyne: the psychedelic philosopher, the absurd absurdist, teachin’ ya ‘bout life, hardship, death and happiness. He’s always done it, but when the grey hairs and the suit came along he became it. The Soft Bulletin and Yoshimi are all about it. In the mid-00s it made sense to see Wayne commandeering a bubble over masses of fans, dispensing existentialist advice to NME and Pitchfork-reading youth.

Eventually, though, people started to say they were getting a bit sick of ol’ mop top. “Someone ought to burst his bubble, preferably with him in it,” said punny guys in the comments sections of punny guy websites. Even I was getting a bit tired – not just of missing my bus, but of the once-amazing setlist getting predictable, and of hearing new songs that just didn’t have the same magic. It was less a case of “too much” than a sense of something missing – the hand-puppet without the blood, the blood without the tunes, the zeal without the mission. Still, they kept rockin’, and it was great to see them embrace the 21st Century in a way that put most other bands to shame, with a plethora of creative projects that didn’t need to be built to last because there was a new one every week.

Then, recently, Wayne appeared to me. I think it was imaginary. He didn’t grin or throw confetti, but he had his scepter with the spinning rainbow orb on top, humming electrically. “I want to show you something,” he said gravely, and tapped his scepter on the ground. *XxzzZSHHxxzeww*, it went. Nothing flashed, we were just suddenly in another place: a desert. I could tell it was so late at night as to be early in the morning. I didn’t have that 3am sense of possibility, more a slight feeling of regret, and fear at the subtle lightness that was starting to fade the stars: it was 4am. There was a mechanical pulsing sound under everything, and an electrical buzz, which might have been coming from the huge neon sign right above us. It said: “THE TERROR”. Under that swung two smaller signs, one glowing “LOVE” and another, to the left of it, flashing “NO”.

“Many have arrived here,” intoned Coyney, gazing across the waterless expanse. “Some killed themselves; others, in order to survive, denied what they knew to be true or believed what they knew to be false: in a way they killed themselves too. The real effort is to stay here without either type of abdication, in so far as that is possible, and to examine closely the odd vegetation of these distant regions.”

“Hey!” I replied, “I used to love Camus as a teenager! You’ve read that too?”

He didn’t reply. A massive Steve Drozd drumbeat started up, kinda Krautrock in its mechanical insistence, and we began to walk. I quizzed him about why he’d even come here when previously he’d said “Love/In our lives/Is just too valuable/Oh, to feel/For even a second/Without”. He kept bringing up Drozd’s heroin relapse, which made me embarrassed. Eventually I blurted, “What about you?  You split from your partner of 25 years last year! Surely that  – hey, where’d you go?”

Every time I raised that topic he just disappeared. Eventually, I learned that I could get at him by talking euphemistically. For example, when he discussed “MK Ultra”, the infamous CIA mind-control experiments, he was really talking about the way we delude ourselves into doing what’s expected and comfort ourselves with lies. I think. Sometimes he did get a bit closer to the bone, but he sang through an effects box so that I had to Google what he was saying. That uncharacteristic shyness on his part was telling.

On our first evening there, I didn’t catch many tunes. I mean there were melodies, but not really choruses – it was more of a vibe, and a heavy one at that. Then again, I reflected, at first The Soft Bulletin sounded like Disneyland on a bad trip, and parts of Yoshimi like robots crying, and over time the most fucked up songs became your favourites. I raised the topic as politely as I could, and Wayne said, “Look around you man. No string sections here, are there? That synthetic wind is swirlin’ around, and the plants aren’t traditionally pretty, but sometimes it’s all got an odd beauty ya know? That’s the whole point, remember. And when you’re marchin’ through this, you’re not hearin’ choruses and fancy bridges, are you? Just the same thoughts, repeating, sometimes attacking you, but then you come up with other ones that are like mantras and they keep you going. Plus, that harsh Gang Of Four guitar choppin’ away over there, that’s groovy right? And, fuckin’, DROZD man! He’s not on the drums so much but that’s a fuckin’ symphony of weeping synths. And every now and then when we stop to catch our breaths, you can just hear somethin’ haunting on the breeze. Listen.”

He was right on all counts. We keep going back for our 4am walks and the weird vegetation has an odd beauty, disorienting at first but more enjoyable once you get used to it. Also it’s honest – without artificial lighting you can really see what’s there. For all that bleakness it’s dynamic, with ridges, canyons, valleys in the moonlight. Sometimes I long for a big peak at the end, like a summit to climb to make it clear we’ve got somewhere. But I guess that’d be a bit of a cheat.

I also find myself longing sometimes for a big Soft Bulletin breakdown, or Clouds Taste Metallic chorus, but that’s also beside the point and, besides, I’ve already got them. It seems this experience has totally renewed my enjoyment of all that other Flaming Lips stuff that I play in the daytime, and play so much more now. Things are rough out there in the desert, and a bit of blood on the hand puppet – not to mention inside it – goes a long way. It makes it all the more meaningful when, at the end of our walk, in the pre-dawn silence, Wayne and I start to sing…

3 Responses to The Flaming Lips – The Terror (Bella Union)