The return of Everett True | 105. Björk (“Singing is like a celebration of oxygen”) 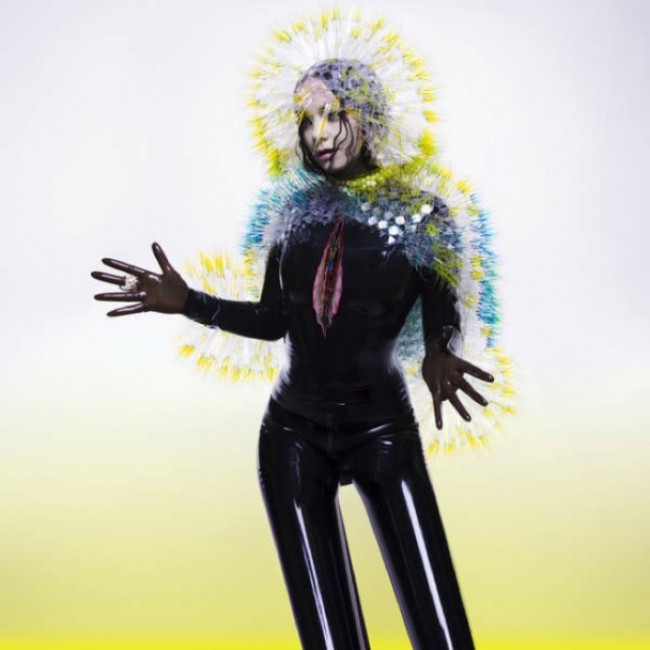 Damn. It’s out now. Did you hear? It’s been dancing through my imagination the last few days: spectral and decaying and melancholy and alert and focused on details far tinier than I recall – glistening and fleeting and soured with soaring strings and seared by emotion. Imperfect, the way sun dancing across dappled water always is. A break-up album, the way the world always is. ‘Not Get’ is a pixie dancing across the Pope’s shimmering chrome dome. ‘Black Lake’ speaks of betrayal the way only trees can. ‘Stonemilker’ touches nerves, not gently. ‘Family’ is her, lost with her young daughter in icy Stockholm, searching for a park. (I’m imagining all this, remember? For all I know, these could be two-chord stone-throwing thrashes and insipid reveries, and the critics will have been caught lying to us once more.) There are silences and (is) space, oh my. It’s classical inasmuch as it isn’t Coldplay. It’s sexy inasmuch as inner selves are always sexy. It disappears into space. It retreats, it reemerges, it reshapes and takes stock. The details overwhelm, the melody, the malady, the Voice.

Confusion. Blurriness. Excitement. I don’t have the music to share with you, not right now. You can find that here, like most everything. So here’s another version.

I don’t have the words. No. I do have the words, but no one’s gonna pay me a dollar every six letters for them so I think I might just pass up on indulging my inner craftsmen, my mathematical self. Leave you with the music (no music). She’s got the words. That’s for sure. She has the words. Here are some. The saddest one – and the one that seems most appropriate here – is the one that reads, “You shouldn’t let poets lie to you”. It was taken entirely out of context, at the end of innocence. I still believe you should always let the poets lie to you. Always. I still believe in Björk, and her indulgence. I don’t know how much I’ll be listening to this album, this Vulnicura. It makes me too sad, in my shrinking innocence and shrunken imagination. (How can I anticipate such melancholy so vividly? Is there always hope, always life?)

I’ve met her three times now. I doubt if we will ever cross paths again.

Here are some of Björk’s words.

“I think everyone’s bisexual to some degree or another; it’s just a question of whether or not you choose to recognize it and embrace it. Personally, I think choosing between men and women is like choosing between cake and ice cream. You’d be daft not to try both when there are so many different flavors.”
Diva Magazine, October 2004

“I find it so amazing when people tell me that that electronic music has not got soul and they blame the computers. They got their finger and point at the computers like, ‘There’s no soul here!’ It’s like, you can’t blame the computer. If there’s not soul in the music, it’s because nobody put it there. And it’s not the tool’s fault.”
The South Bank Show, 1997

“I’m bringing up a daughter, and she’s four-and-a-half. I’m finding that if I do not give a fuck, she’s going to kindergarten, all the girls are wearing pink and they just want to be princesses and marry a prince. And I’m like ‘Do I give a fuck? Yes. I do’. So am I a feminist? I don’t know [laughs].”
Plan B Magazine, July 2007

“I want to support young girls who are in their 20s now and tell them: You’re not just imagining things. It’s tough. Everything that a guy says once, you have to say five times.”
Pitchfork, February 2015

“You shouldn’t let poets lie to you.”
Bjork TV

“I’m a very different musician to Coldplay. I like extremes. I think they probably like the middle a bit better than I do.”
Drowned In Sound, 2011

“It’s hard for me to see me from the outside. Everybody says, ‘Oh she’s so lucky; she wore the swan dress and she hit a reporter’ and all that clichéd rubbish mainstream crap. But ever since I was in The Sugarcubes it’s always been about my voice.”
Plan B Magazine, July 2007

“I find it very difficult to draw a line between what’s sex and what isn’t. It can be very, very sexy to drive a car, and completely unsexy to flirt with someone at a bar.”

“A keyboard shall not pretend it is a violin; it shall be proud to be a keyboard.”
Aftonbladet, June 1996

“I think everyone should sing. No two people tend to sing the same way; it’s like fingerprints.”

“If you’re just a consumer, it gets to a point where you don’t get a kick out of it any more, Oh, another glass of champagne. So fucking what?”
Arena, March 1995

“I’m not keen on the three-chord thing, The Strokes or Oasis. It’s like Boy Scout songs to me.”

“After being the only girl in bands for 10 years, I learned – the hard way – that if I was going to get my ideas through, I was going to have to pretend that they – men – had the ideas.”
Pitchfork, February 2015

“I find everyday life quite awkward – especially communicating with people, especially strangers. I was very introverted as a child and played a lot in nature and walked to school. I’d be singing, and everything would fall into place in my imaginary world. What I heard in my head and in the wind and my voice would all make sense. And then you entered school and it was like, [raises hands] DOOSH! Everything’s weird: a lot of injustice, and my inability to express myself.”
Plan B Magazine, July 2007