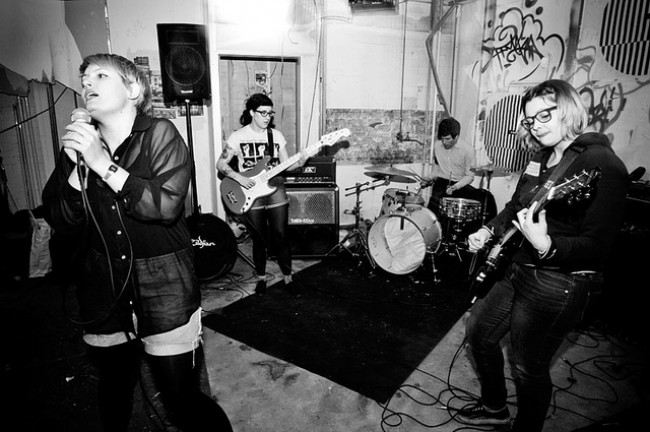 A quote from Viv Albertine to start us, perhaps.

They’ve got that Distractions guitar sound, he thinks to himself idly. He then realises that approximately none of his readership – as rarefied and tuned-in as it is – will get the reference, certainly not in the context of 2014, so he hastily updates that thought to include the phrase Royal Headache. He’s not sure, has never been sure – can’t be arsed to get on the email to Nic Warnock and check his facts – that this guitar sound hasn’t been stumbled across by accident. Something to do with the mutilation of sound that occurs when a certain type of cheap guitar is plugged into a certain type of cheap amplifier, and the volume ramped up as high as it can go. He doesn’t really care, either. He just knows that he’s a hog for the sound, baby. A hog, baby.

In passing, he also remembers idly a certain Dickless show he saw in Seattle – the all-female quartet were supporting Mudhoney at some thee-archer or other – where folk were stage-diving into silence such was the chaos that ruled during the songs, the brevity of the ferocity. It was a bonus if the four players (one shudders to think what Paul Weller would say if he heard the band, examined their gender and then saw the word ‘musician’ applied to both)… playas finished the song at the same time. Indeed, it was a bonus if they were even playing the same song at the same time. Not that this has any relevance – transitory or otherwise – to the song he has now heard play several times from Good Throb.

He examines one of the above phrases, rolls it around his teeth a few times, decides he likes it and wants to run with it. Such is the brevity of the ferocity and the beauty that lies within Good Throb and their good throbbing songs.

He types “songs”. He now realises he has only experienced one such beast – and such is the nature of the sound, he now finds himself desperate to hear more, and… damn. The second song he hears might be even finer than the first. Serious. He always was a sucker for a circular motif, repeated: and the sloppy girl punk DIY of Kleenex.