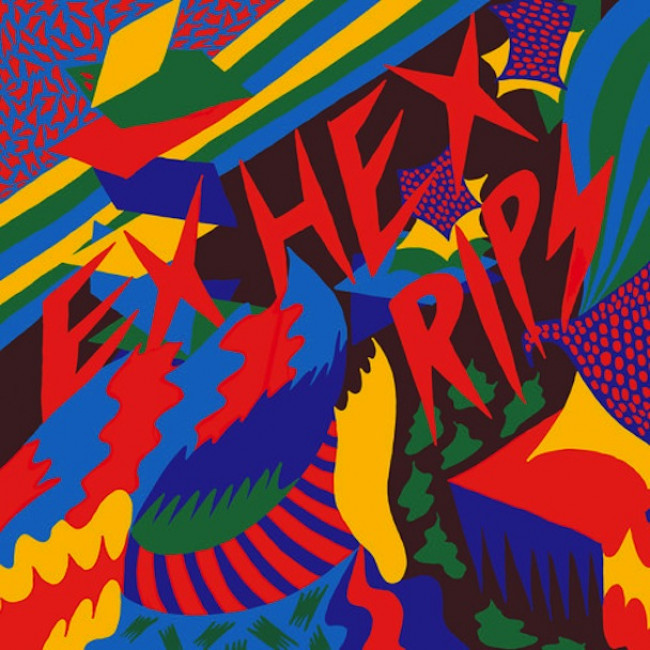 Oh, yes. Hell yes. These gals are talkin’ my language. Two minute tunes, beefy riffs, catchy tunes, handclaps. A local critic penned the quip “Thin Lizzy all up in yr grill” and I concur. To an extent.

Can ya feel it? The heart and soul and power [pop] of rock and roll at its diamond pure carbon core? Good lord, yes. Listen to ‘em stretch out on the stage, ease back into those squalling guitars – you can almost see the Townsend-like windmill strokes (“Waste Your Time”, especially). Look at ‘em, there on the back cover, their own denim-clad biker gang. And so they are – down from Mary Timony’s tough-gal tease to the ohh-woah-woahs and oh-ohs.

I couldn’t stop thinking that the narrator of “How You Got That Girl” must have informed the intro and moral behind 38 Special’s “Hold On Loosely” – but then, try singing “my best friend’s girlfriend” over the chorus. Ah.

Yeah, Ex Hex embody that greasy pin-up chrome shine Candy-O world rather nicely – but then “Waterfall”! Yaooo-oh! How more perfect can a rock song be? This has to be just the same slam-bam lusty hands-in-the-air SURGE that the Undertones gave John Peel, yeah yeah? I know I feel it. No complications, no muddled history – suddenly a burst of light, and you’re in with the gang, laughing and pointing at the same punch-drunk asshole.

It’s a chemical reaction, nothing more (yaoo-oh)
I wanna show you my affection,
but you’re on the floor

Yeah yeah yeah. And dig this one here, “War Paint” –

– which, on the surface, sounds like the girls stole the blueprints to the 101’ers’ “Keys To Your Heart” (who remembers the pre-Clash days, anyway). But with each listen, I’m a-thinking these lyrics empower the decisively unhip far more than this Top 40 slushie of a hit that’s been nagging me lately (no, I’m not embedding the video – this tangent is not worthy of the red button treatment). And now that I see the feather-crusted cinematography, even more so. What is this? Who commissioned this flawless starlette to stand up for child equality (yes, that’s a thing, I said so)? Seems Echosmith want us to interpret the wistful I wish that I could be like the cool kids chorus as some high school pep rally anthem, some thin rubber band that serves only to bind together like minds, and pinions the hands and feet. Banish these optimistic squirts please, Ex Hex – tell ‘em I’ve got no time for cool kids and grind that cigarette butt into the pavement like the badass chicks I know you are.

Anyway. Where was I? Oh, yes – unabashed ripping. So shameless, why, the album’s named after the whole process. See, look: “Beast” rips out the backbone of “Roadrunner” – and, in case you didn’t catch the Modern Lovers love then, Ex Hex ensure that you do by entitling a completely unrelated tune “Radio On”. Although, really, given the Herculean AOR riffs throughout (and particularly this tune, which I swear shares the same muscles as “Crazy Train”, though sadly not the craziness), “radio on” ain’t a bad tagline for the whole affair.

Does that prove any point? No, not really, except that you could throw on just Cowtown or Ex Hex all night on repeat in between sets at a local gig and no one will ever complain. Rips works for me cos Timony and the gang make it work, and because god damn wouldn’t ya love to throw around big sloppy riffs with ’em one or dance yrself dead down front? It’s fun for the sake of fun, which is why anyone bothered to play guitars on stages in the first place, innit?