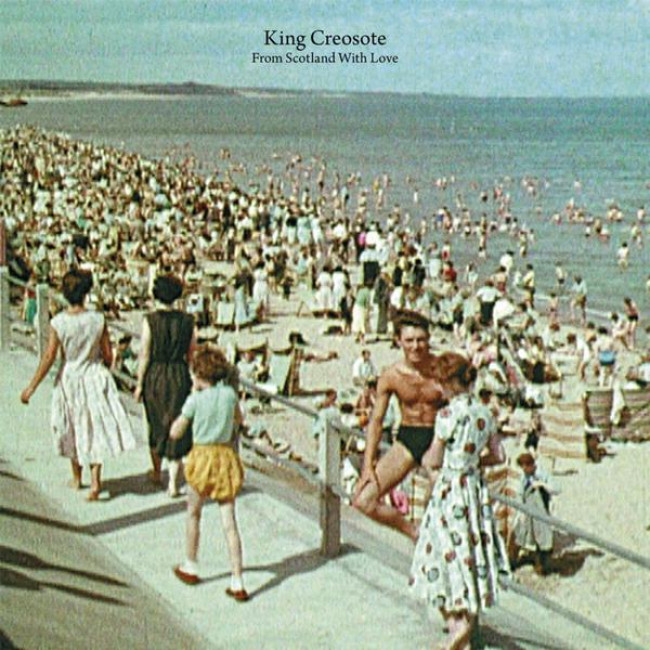 So I’m half-tempted to split this review with another folk album in my queue – one that breaks more molds and challenges the listener on many more levels – but I’ve decided against it. The work in question demands more thorough listening and all the space that a digital article can afford (and no, digital articles don’t have infinite boundaries, not with today’s on-the-go, multitasking audience).

Anywho. This King Creosote. I know he means well. But From Scotland With Love does sadden me. Not because the violins leave honey-laden kisses, or because the subject matter touches me on any level. It saddens me, because in spite of the obvious “folk” persona, the record has not untwined itself from some very contemporary, and very commercial, stereotypes. Not that I advocate strict adherence to tradition – indeed, we’ve established already that I’m all against that – but sometimes, when the music swells into a flowery waft, I see producers behind booths, huddled over books about OK Computer and Kid A, booking sessions with world-class chamber ensembles, and feeding PR novelists juicy tidbits.

Here’s the dilemma. On the one hand, you can’t escape the Radiohead connection, no matter how hard you try. That particular unassuming, clear-as-glass synth tone, that sad little shuffle, even that sort of mournful croon with just those high-up cadences (albeit with a Scottish accent) – yup, “Miserable Strangers” is a dead ringer for “No Surprises” (“Leaf Piece”, the following track, isn’t, but does resemble “Miserable Strangers”). King Creosote mines that certain melancholic brand of soundtrack-bombastics-applied-to-pop that Thom and his gang invented, that Coldplay repackaged into more digestible balladry, and which continues to trickle down the “alternative” charts.

Not gonna lie – I didn’t have a thought in my head about Radiohead on the first go-around. But now it’s tough not to hear – ay, well, except on “Largs”, a straight-up polka number that swings down and around the floor until its tires out in a gypsy jazz lull. And I is a sucker for a clarinet solo. If King Creosote had commissioned more clarinet solos throughout From Scotland, it wouldn’t have been such a burned-out, hackneyed bummer. You hear that, fellow songwriters? Less violas, more clarinets. HOP TO IT.

The other great track on here – that is, another track that doesn’t ring hollow with slavish imitation – is “For One Night Only”. It’s about a miserable poor bastard who hoards every little scrap of change he finds during the week, and finally splurges his savings for a night on the town. That smacks of life to me – maybe a dewey-eyed, made-for-TV kind of fairy tale, sure, but the story never quite resolves (even though the music does). And the string section here, too, bursts with amber cheer, but still drips of a longing that isn’t fulfilled. I wouldn’t mind if this one track infiltrated the radio waves and massaged the masses’ ears.

That’s it, though. Please, don’t sucker me into falling for another song by employing children and nursery-like rhymes (“Bluebell Cockleshell”); and please don’t try and emulate global unity with a full-on choir (“Pauper’s Dough”)*. The album’s simple, classical outro does tie up the affair well, but only as a paper label might neatly bind a pack of coat hangers together – convenient packaging for a bundle of commodities.

Kenny sounds like a nice, sensible guy, though. Certainly not a king, and I’m really quite grateful for that. As much as From Scotland doesn’t excite me, I can’t say it’s ticked me off.

*For a better example of how to end an album with a choir and not come off sounding like a benefit concert, see The The’s “Giant”.