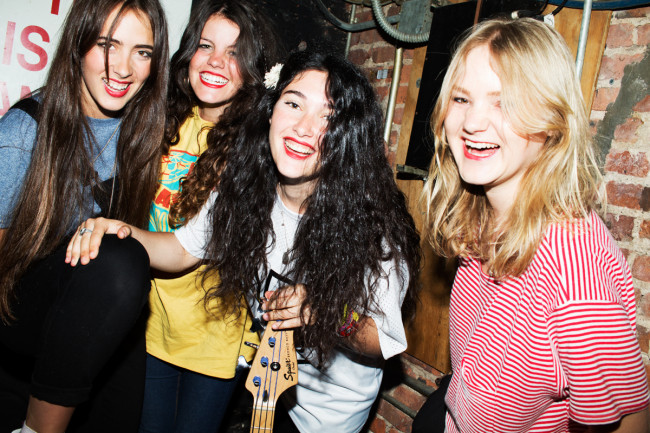 It is Wednesday morning and I am in the same country as Hinds. From Oxford I am skyping with Carlotta, who is in a non-specific hotel in Birmingham. A small room with white walls. Carlotta looks tired, but happy nonetheless, ready for the next gig in Bristol. I tell Carlotta I’ve already missed two of their concerts: the one in London last week, when I was in the same city but had to be back in Oxford for the evening, and in the summer when they were playing End of the Road festival where one of my shifts sadly coincided with their set. Carlotta then tells me that they actually played a second ‘secret’ set at EotR, which means I’ve missed them three times now.

On the topic of touring, I ask Carlotta what the best and worst parts of it are. She immediately starts a long rant about all the downsides: “The worst things? The worst thing is the food. It’s terrible, always eating shit from gas stations, everything is just disgusting. You keep thinking, WHAT was I eating before touring, you completely forget other types of food. You just think of junk food, and it’s terrible, especially for us Spanish people. Flying is also terrible, we hate flying with all our hearts. Touring is such a mess, it’s a real mess to do your suitcase everyday, you keep losing so much stuff. You end up not taking sentimental things because you will lose them for sure. Actually, that’s it. Well, you will also miss home, or end up sleeping on the floor, or for example this bed I’m sitting on is super super tough. You need extra energy all of the time, so it is very exhausting.”

I start worrying she misunderstood my question and thought I only asked for the worst things, but then she starts smiling: “But… the good things of touring outweigh the bad things, that’s why we keep doing it. We love playing, we love watching people in different cities of the world. We love seeing with our eyes that they are enjoying our music. They sing the songs and dance to the songs and you can see in their eyes that they are watching us, and that’s so cool. You get to see the world and you realise a lot about who you are because of knowing so many people from different cultures. Your mind totally goes open.”

The connection with their fans is very important for Hinds. Carlotta says: “I really like them. I don’t wanna give a name, but we went with some band, and the drummer kept saying ‘I hate our fans, I don’t like them’, and for us that’s curious. We are very similar to our fans, we understand each other.”

Apparently, Hinds are very ‘visible’ on the web. Almost all of their video’s feature the band members, often doing weird dances, synchronised smoking and other silly stuff. On Facebook they leave personal and enthusiastic messages and their Instagram is full of photos. Now of course a lot of bands actively use social media to advertise themselves, but I’ve rarely seen a band do it in such a personal way as Hinds does. Asking Carlotta about this, she says: “This project has always been incredibly personal. We wanted people to know us, to know that there is no one behind us. It’s our face making this music, making these videos. I am communicating to you directly, so I think it’s important you can see my face, so you are not talking to a machine.”

So what are you like? “Very messy! But we have discipline, lots of discipline. We are very optimistic, in a lot of ways. We love to party, that’s true, we party very hard. People have been saying to us, ‘How is it possible that you party so hard and then wake up at 8 in the morning to do 14 Skype interviews. So we work very hard too. Sometimes we call ourselves ‘Rock ‘n’ Roll Soldiers’. Like ‘SOLDIER! You gonna be on time!’. We just think with reality in mind. We do a song or set when we are hungover, we are always on time.”

This is exactly the type of thing Hinds mean when they have said in other interviews that they are tired of people describing them as ‘fun’ or, worse, ‘girls just having fun’. “That sentence is terrible. No man, dude, that ‘just’ is the killer word, we don’t only want that in our lives. I think sometimes we get offended because of that, because it looks like we do everything effortlessly, but there is a huge amount of work behind what we do. Even on the album, we take care of every detail. We are getting bigger and bigger and the amount of work is growing too, and we really really work a lot, and that’s why we jump when people say ‘You are girls having fun’. I mean, yeah, I love what I do, but we work so, so hard.”

Music critics take note! But enough on this negative topic now. I want to ask Carlotta what the music scene in Madrid is like and if there are any elements to their music that are somehow distinctly Spanish. “All we know about new music comes from two bands in Madrid and what they taught us, The Parrots and Los Nastys. They both do garage, in English and Spanish. For example what has happened to me is that before Hinds I used to sing a lot of sixties seventies music and old classics, but suddenly around 2009 I met these people and then I discovered one of the most beautiful things about music, which is to be alive. The live shows are so good, I started to look for music that is alive. We started to do all this garage, new bands from America like Mac DeMarco and Shannon and the Clams and yeah it was because of them.”

About the Spanish elements in their own music, Carlotta lets me in on a secret: “On all songs of the album except ‘I Will Take Your Flowers Back’ there is a Spanish guitar behind the electric guitar. We really love how it sounds and it’s nice and naive. I think you really can notice that we are people that live in a land where the sun shines a lot and where the skies are blue. Life is kind of easy, we live on the streets and have a very cheap life. You really can tell all those things, the cheap-thing, the sun-thing, the blue skies-thing.”

The last question is one that I ask every band I interview but it needs a bit of context. My own blog is called ‘Beautiful Freaks’, after the Eels song, and I always thought of it as a description for the music I like. Beautiful, definitely, but most often slightly ‘different’. The freaks the misfits the outcasts. So I ask artists if they are a Beautiful Freak, giving their own interpretation of the term. Carlotta answers with a convinced ‘Yes!’. “Well, maybe just freaks. We are freaks of music, man. The four of us ended up together not because we went to the same school, but because four different school scenes of Madrid have their own freak, and they, we, ended up together.”

Hinds’ latest album, Leave Me Alone, is out now on Lucky Number. Snap it up here, or here, or wherever you can.

One Response to “Rock n’ Roll Soldiers”: An interview with Carlotta Cosails of Hinds