Shut up about Kreayshawn being racist 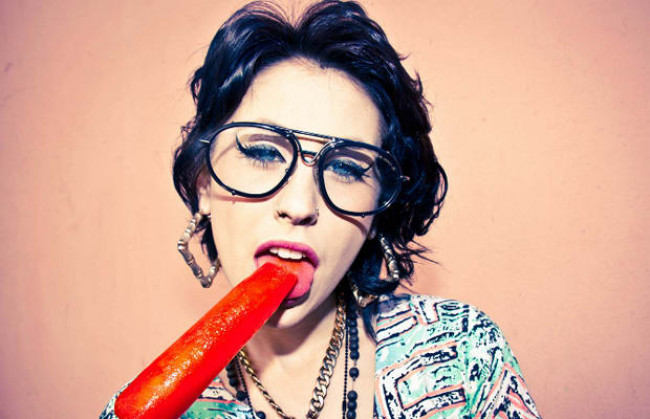 In the last few days I’ve gotten into two very intense debates via Facebook about whether or not Kreayshawn is a racist.

Naturally Facebook would be the perfect forum for such a topic, as it would for a debate about any number of things that could also be neatly listed under the heading “stupid crap”, but it’s also a forum where you can type the most well-thought out point ever and still be presented with a response that’s the equivalent of “just because”. The most common, negative opinion of Kreayshawn is that she’s a racist, privileged, appropriating, female misogynist. You’ll primarily only encounter these opinions coming from the mouths and furiously typing fingers of women however, and do you know why that is? Because women are taught to turn a questioning eye towards any other female who has, or is doing, something that she herself doesn’t have or do – and because men don’t give a shit. And whyyyyy don’t men give a shit? Because if Kreayshawn was a male artist instead of a sassy white broad, she’d be called The Beastie Boys, and there’d be nothing to talk about. And because literally every male rap or R&B act that’s come out in the past 10 years did exactly what Kreayshawn is attempting to re-create for herself now and received NO flack for it. More than an argument about possible racism and appropriation, this should be peeled down to reveal what it’s really about: nasty ass bitter haters. Or, to put it in a more civilized way: girl on girl abuse.

When approaching any debate, on ANY subject, be it peanut butter to the collected works of Maya Angelou, you need to go in to it with the understanding that everyone in the world is WAY more sensitive than they should be in order to lead a healthy life or have a rational conversation (myself included) and that if you’re having a discussion with women about another woman, you need to be ready for rebuttals against why the woman in question is or isn’t “crazy”, or “a hipster”, or “a bitch” because these are the standard labels given to girls that make other girls foam with, and let’s just say it clearly right now, jealousy.

In case, after all this, you’re reading this and not even aware of who Kreayshawn is, she’s an Oakland, California based rapper who’s song ‘Gucci Gucci’ has reached viral success over the past month. In the video for the song, Kreayshawn and her friends flit around town talking about how “standard ass hoes” wear such labels as Gucci, Fendi, Louis Vuitton and Prada, but that she and her friends don’t need to, because they’re cooler than that.  With her in the video are clusters of African Americans who are referred to as being ornamental by those who are on team “Kreayshawn is a racist”. This is curious to me because I wasn’t aware that having friends outside of one’s own race, or wanting to include other races in your artistic works was ornamental. Seems like sort of a racist thing to say if you ask me. I mean, isn’t hanging out with, and working with other races pretty much the dictionary definition of NOT a racist? I mean, it’s not like she has them doing her laundry or serving her drinks in the video, they’re just hanging out and doing what any other popular rap outfit enjoys doing, smoking pot and talking about “snatching all your bitches”.

Taking on the terms being pinned on Kreayshawn one by one, let’s start with “appropriating”. The dictionary definition of appropriation is: to take without permission or consent. Put into the context here, it seems that people have a problem with a pretty little white girl taking on the tone, swagger, subject matter, and style of what is commonly associated with African Americans. To that I say: and so is every other person you see walking by you on any given day, from the streets of New York to the grain fields of rural Illinois. This planet is nothing BUT appropriation. We take on elements from other races and cultures, elements that we value and appreciate, and incorporate them into our personality map. Granted some people do this in a douchey way and some people don’t, but there’s no getting around it, and there’s also nothing wrong with it. I can so easily bring up a recent memory of a friend of mine who’s from Kentucky getting all bent out of shape and calling another girl an appropriator because that girl (who was not from the south) had started using “ya’ll” in casual conversation. Seriously? Take an aspirin. Do you know what happened the last time a group of people tried to maintain the fine lines of cultural traits? Hitler.

The claim that Kreayshawn is perpetuating misogyny is another issue that pops up often. The definition of misogyny is: hatred, dislike, or mistrust of women. Well first of all, if I was a new female artist who was trying to carve a name for myself in a strong out spoken way, and going into the world to creatively make my own money without the help of a spouse or government assistance, and being met with swarms of ladies on the internet calling me a misogynist and a racist, I’d be distrusting and disliking that shit too. Really though I’ll go back and point out that although hosing down the world with more talk of smacking hoes and shooting bitches isn’t exactly the coolest thing to do, she’s not doing anything different than any other male rapper. The argument, “Well she should know better because she’s a female” just doesn’t cut it because 1) she’s allowed to talk about whatever the fuck she wants and will make her money whether you’re crying about it or not, and 2) These are songs we’re talking about. If every artist was judged and prosecuted based on the acts they performed in their songs, every artist would be behind bars for life. Shit, even Simon And Garfunkel wrote about getting high and smoking crazy blunts.

Kreayshawn isn’t a racist, she’s just another artist who is being paid more than any of us will ever be paid in our lives to do and say the things we wish we could. I would look like a damn idiot fluffing my feathers up and down the street and talking about having “swag coming out my ovaries”, just like I’d look like an idiot wearing a cowboy hat, or with newly formed dreadlocks, or participating in a drum circle (all things that could be pinned with appropriation) but somehow she could most likely pull all this off, and more, and that’s why SHE just signed to Sony Music and I didn’t. I know, I know, it stings, but I think that maybe if we focused on how to gracefully accept the achievements of others, and use them as inspiration for working towards our own, we’d get more out of it than calling people who we’ve never met, and never will meet, a racist bitch. (Just because.)

25 Responses to Shut up about Kreayshawn being racist