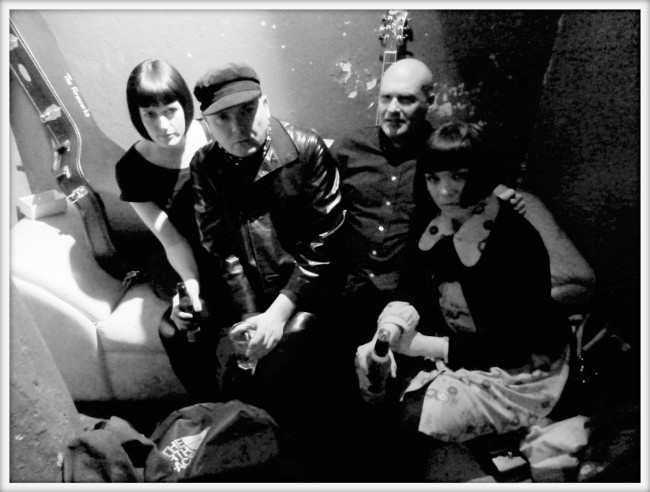 Pitch perfect. This is specifically NOT Shop Assistants, but even further deeper warmer underground. The words The Groove Farm (very early) come to mind.

I can’t choose between the following songs. They all make me feel deliciously wantonly spookily wonderfully happy. They make me feel justified, a little less alone. The rumble of drums and the tingle of toothpaste send a rush of blood up through my toes as soon as they start up. Every time. I really can’t choose. I think that Emma’s vocals on the third song *just* tip it. Her vocals. The way Isabel holds the bass. Her style. Matthew’s chunky guitar. His guitar.

You send shivers down my spine
And it happens every time.

One of my proudest moments was David telling me that I’d directly inspired a couple of Shop Assistants lyrics. Good, positive lyrics. I stand by what I said just now, though. This is specifically NOT Shop Assistants. This is far deeper more insular happier immersed underneath the surface.* (I don’t believe the Shop Assistants ever released a flexi-disc. Oh, wait. Yes they did. With The Legend! fanzine.) If you want to push me on this, yes I do know my ’85 and ’88 cutie. Every possible way you can imagine.

Here’s what the Romford Rocket, Mr David Callahan himself, has to say about it:

Resolute as it is, ‘indie’ has become our folk music or blues, successively added to and taken away from by each emergent act, over decades now. Seen in this light, The Fireworks are fundamentalists of the Shop Assistants/Flatmates school.

Actually, they’re the anti-fundamentalists: where there would be austere notions of authenticity there is in fact joy in celebration of these roots. The drums spill over themselves in an adrenaline race; the bass growls in a pushy trajectory; the guitarist is in love with the grain of fuzz and lo-fi, but remembers the power of volume; a strong singer pushes her voice to a point where it adds complex emotions to lyrical simplicity.

So: a simultaneous lashing out of joy and melancholy. This is original (as in first wave), punk-informed indie, with a spring in its step and a buzz in its ear. We’re back to basics after the fiddly cleverness of recent years. Distilled, boiled down – and you can whistle the tune.

Spot on, Mr Callahan. Spot on. And could I just – rather belatedly – take advantage of this situation to apologise for that one Wolfhounds Camden gig I spoiled in ’89 (that’s a wild guess!) by heckling so mercilessly there was only time to play about four songs. (Mr Callahan gave as good as he got, I recall.)

Can I throw in a quick mention of his band’s new video, he asks? Not offended if I don’t, but might be nice if I do. I don’t see why not. Can’t see that The Fireworks will object, either. I LOVE his band, and their new video. He’s never sounded so on fire:

But today is all about The Fireworks and I cannot get this one song out of my head. Obsessed.

One Response to Song of the day – 670: The Fireworks