Father John Misty – “I Love You, Honeybear”: A Line-By-Line Analysis 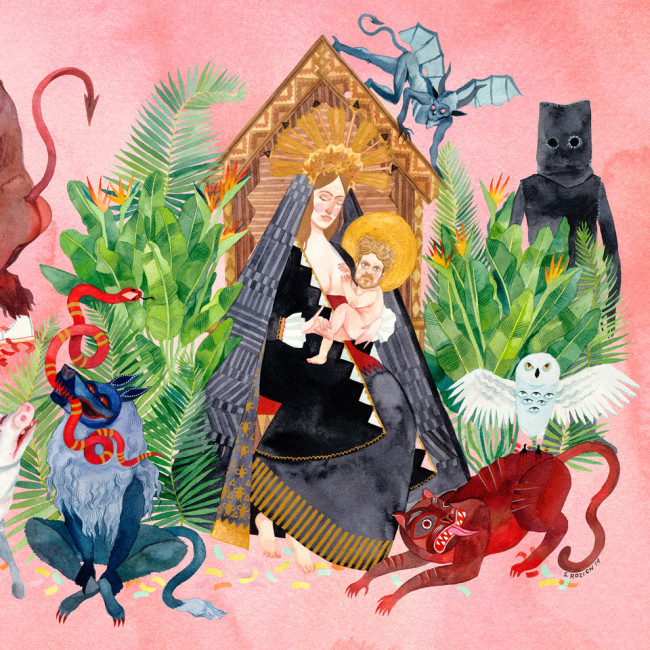 Morning, everyone. So last week, we touched on poetry in songwriting. Well, before we dive into that discussion, I thought we’d have a little fun and analyze a modern example. How many of you have heard I Love You, Honeybear by Father John Misty?

You guys are giggling – I assume you guys talked about the whole suicidal vinyl fiasco in Mr. Nicks’s class? Good, very good. Well, today we’re going to see if Father John (aka Mr. J Tillman) botched the lyrics, too.

Let’s just look at the title track for now. The first stanza reads:

Believe it or not, this first verse is likely the most mellifluous stanza in the entire song. The “a” in mascara and the “a” in ash match nicely; “blood” and “love” share the same vowel sound, making a nice close rhyme (spoiler alert, everyone – Tillman rarely rhymes, at least not in this song). It’s also quite the riddle, isn’t it? Oh, Tommy? Yes, you’re right – it does sound like a Trout Mask Replica intro. But the music is far too polished and flourishing to read it flippantly – just like the bloated orchestra in the background, we have to take these words as authentic “art”, pieces in a cohesive narrative.

The pet name “honeybear” establishes at once both the speaker and the subject – the former a possessive, irrationally attached male, the latter the individual of his affections. The second line confirms that the subject is female, but with troubling connotations – does this protagonist honestly associate make-up with the very core of his girlfriend’s existence? Or, worse, that women are separate entities from men, distinguished by an inherent reliance upon mascara? The subject isn’t broached anywhere else in the poem, so we can never know for sure.

Now, ashes can be either a remnant of destruction or a precursor to rebirth (or, simply, cigarette ashes, with no higher significance whatsoever.)

ADVISORY EDIT: Somehow, even with the lyric sheet in front of me, I still read the line “Rorschach sheets” as “Rorschach streets” – and by all counts, the correct wording makes far more sense than my mondegreen.
Ergo, I’ve marked out that part of the lecture.

Indeed, the first three lines offer such promising paradoxes – but, as “I Love You, Honeybear” unravels, we soon find the Father eschewing enigma and good writing in general:

This is a sad example, kids, of when careless writers mix colloquialism with formalities for no apparent reason, other than to impart a cheaply bought irony. Furthermore, that phrase, “fuck the world damn straight” – what meaning at all does that convey? Yes, Mel, that could be an obtuse compliment, albeit the sort that a wasted frat boy might string together. But yes, Jake, in this context our speaker is more likely praising the woman for her sexual prowess. Either way, this lady’s merits is framed entirely through fucking, and gratifying the male partner, which renders this speaker as either intriguingly unreliable or just run-of-the mill dull.

But don’t ever doubt this, my steadfast conviction
My love, you’re the one I want to watch the ship go down with
The future can’t be real, I barely know how long a moment is

Correct, Liz – about as whiny and emo as a sensitive singer/songwriter could possibly be! And there we have that cringe-worthy cliché, “steadfast conviction”. Take heed, all you smitten poets in the room – “steadfast” is the store-brand perfume, plastic flowers with dried glue for dew. Inexpensive, deceptive. Only buy as a last resort.

This is where shit hits the fan, everyone – not with the plot, as Tillman intended, but with the songwriting. “Garden variety oblivious”. Try to roll that around in your mouth – rather lumpy, innit? Mr. Misty defers to a pretty country lilt to cram all those syllables in – and still it’s a godawful phrase, because are there really that many types of oblivion floating around in the population? The abstract “death” doesn’t help, either – if we had cum earlier, can’t we glimpse blood, tumors, shriveled bodies, swollen limbs, anything to lend color to that garden variety? All this is underpinned by the advent of a “global market crash”, as if a single downturn in one nation’s economy could ripple outward to a universal depression. Mind, economy’s not my forte, but I don’t believe the concept of a “global market” is quite so simple. Unless, of course, some world-wide catastrophe precluded this crash – an event which, no doubt, would have been far more vivid and horrifying than a plunging line graph.

You grab my hand and say
“And I told you so, boys
It’s just how we expected.”

This is a last-ditch attempt to make the female character appear intelligent, in spite of the previous misogynistic descriptions. There’s also no lick of sense in it. That’s right, Jerry – who are the “boys”? Did they walk in while she and our protagonist were naked on the mattress? Also – if “it’s just how we expected, why is the “I told you so” necessary? That sounds like one of those Looney Tunes moments when Bugs comes up with an idea, Daffy rejects it, and then a second later exclaims, “Say! I’ve got an idea.”

Well, thanks, Captain Obv(l)ious. Bear this sentiment in mind, though, because it’ll crop up again.

Now the Father is filling in space, clawing around for ideas. Demons! Yes! Throw ‘em in! I’m reminded of a workshop class – we’re reading someone’s short story, when halfway in the first zombie appears. And our writing professor (who became poet laureate of Georgia a few years later) exclaims, “Oh, great. Zombies.” If you’re going to write fantasy, he told us, please clue in your readers from the get-go, or else you could really piss off your audience.

(True, the bastardized storybook cover ought to signal some flippant religious references, brought in merely as a backdrop for mean-hearted irony, to make no point or reveal any substantial point of view, only to garner staring eyes and nodding heads. But say the song worms its way to the listener by radio or other medium outside the LP.)

We could also complain about, as before, the frustrating lack of detail – “conceiving”? Yeah? As in drawing a magic circle? Or is the little bugger literally crawling out of the lady misanthrope’s womb?

Deep breath, everyone. We’re on the last leg.

You’re welcome boys, have the last of the smokes and chicken
Just one Cadillac will do to get us out to where we’re going
I’ve brought my mother’s depression
You’ve got your father’s scorn and a wayward aunt’s schizophrenia

But everything is fine
Don’t give into despair
Cause I love you, honeybear

There’s those mysterious voyeur boys again! But no matter – observe the third and fourth lines in that first stanza. What’s wrong with this section, aside from the choking hazard at the end? Yes, great question, Bianca – did everyone hear that? We can’t be clear if Tillman is just referring to mental ailments that the two inherited, OR if these are actual people who climbed into the Cadillac. Either way – well, who’s the real misanthrope here, the neighbors conceiving demons, or the singer/songwriter that begrudges anyone with a mental disorder?

The last stanza is the crux of the poem, though – “don’t give into despair / cause I love you, honeybear”. Now you could argue that, since this is one of the few rhyming couplets in the piece, that the Father employs the phrase mockingly, offering love as a cold comfort. Or, given the rather singular sex talk earlier, we could read this as an assertive display of ego – that the protagonist positions his affections over and above the global crisis at hand, a retreat to hide in and shun the rest of mankind, a final resting place to hang the towel on civilization.

So basically, “I Love You Honeybear” is about Tillman flipping the bird at the apocalypse. And this is what kills the song – the culmination does not try to unearth some new truth about anyone even the two characters of the narrative. Mr. Misty sneers at the status quo, but does nothing to subvert it, or even to expose it (just who are the “garden variety oblivious”, anyway, and why?). I’m better than you, he says to us, over and over, and never explains why.

And that’s all we have time for today, class. If you have any questions, come see me after class. On Friday we’ll continue our talk on ineffective lyrics within the neo-folk movement of the UK.

7 Responses to Father John Misty – “I Love You, Honeybear”: A Line-By-Line Analysis