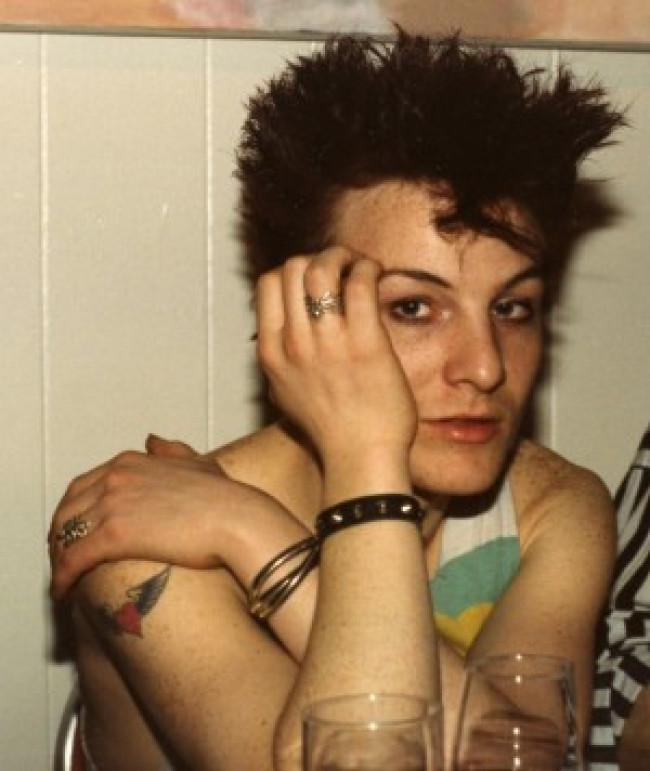 I imagine the day the band finished working on this song they were convinced it was going to be huge. I can imagine them ordering some food, several cases of beer, maybe some champagne, maybe some celebratory white colombian powder to help the night go on forever. After a few years of chasing stardom without a whole lot of success, they’d finally done it. An honest to goodness infallible hit. It sounded like everything else on the radio only better. It had hooks all over the place and strange-yet-cool lyrics like “The city’s mad in its head / And sick in its soul/ All the stars flew away a long time ago”. How could it fail?

And maybe in some other universe it was a massive hit, but not in this one. The music business is funny that way.

I get that their 1989 album Plastic Fantastic wasn’t the best thing they ever did, but that’s still a brutally short biography.

Flesh For Lulu mean a lot to me. ‘I Go Crazy’ was on an album called Long Live the New Flesh and I had just turned 15 years old the summer it came out. I don’t remember hearing it on the radio. There wasn’t any college radio where I grew up but we did have a good Commercial Alternative (Cure, Depeche Mode, Smiths, etc.) station called 91X, and apparently the song placed #39 in their 1987 year-end countdown, two places below ‘I Wanna Be a Flintstone’ by the Screaming Blue Messiahs. But listening to Long Live the New Flesh tonight for the first time in years, I still know it backwards & forwards.

My best friend at the time, John Lynn, had just gotten his learner’s permit. And while a learner’s permit doesn’t give you legal permission to drive, it did give John the confidence to go ahead and drive anyway, which looking back on it was a crazy risk. He even let me drive his car once—three blocks back to his house. It was the first time I ever drove and it’s a miracle I didn’t hit anything. His car, a yellow Renault Le Car from the 1970s was a manual shift, and I don’t think I’d ever even sat behind the wheel of a car before, let alone one w/a clutch. And what with all the shifting and gears and pedal manipulation, John had to remind me several times to look up at the road.

So anyway John had this idea that we’d get a job that summer delivering newspapers. We’d make about $150 each a month, and after the last paper was delivered (8am if I remember right), we could go to the beach and hang out all day, which in 1980s California was every kid’s dream, so much of a part of the culture that you didn’t even question it even though all the great things about the beach kind of suck when you think about it:

Chicks! (neither of us were going to talk to any girls, esp. girls in bathing suits)
Surf! (our neighborhood had plenty of pools that weren’t filled w/salt)
Sand! (all over your body, your clothes, your car, in your ears for days)
Sun! (burn)

But the plan was hatched and I said yes and so we got jobs as paperboys. My dad at the time had been all over me to find a job for the summer so I figured he’d be pleased (he wasn’t, but that’s a story all it’s own). And most nights it seemed easier to just stay over at John’s than go back home, and so I ended up spending around 80% of my summer hanging out w/him.

John and I shared the same two obsessions, music and sports. Neither of us played music, but we both played sports. He was a well-above-average baseball player and i was an ever-so-slightly above-average basketball player. But whatever money we didn’t spend on gas and mexican food we spent on cassettes. And the only thing we had to guide us was the radio and our ears. We were both transitioning from mainstream into alternative (not a dirty word at that point) and so I remember listening to stuff like Bryan Adams and Van Halen alongside our U2 and INXS. But there were two cassettes we listened to obsessively, two albums that still, if I hear them today, I know every single note. One of them was The Alarm’s Eye of the Hurricane.

And the other was Flesh For Lulu’s Long Live the New Flesh.

I think John bought it b/c he heard ‘Postcards For Paradise’ on the radio. This all happened many, many memories ago and there’s a few foggy spots. I feel like I could be missing something important. For some reason, we drifted apart once the school year started—different high schools, different friends. He called me up a few years later out of the blue. We hung out a couple of times, he even convinced me to come surfing w/him, but we just didn’t really connect. It’s funny. In the years since, I’ve never found him on F-book or any of the other social media. But there’s a lot I still remember, or am remembering tonight.

I remember his dad taking us to an indoor soccer game, and when we got stuck in traffic his dad just opened the door and pissed out the side.
I remember him letting me wear his letterman’s jacket one night when it got unexpectedly cold while we were out miniature golfing.
I remember one hot night sneaking out of his apartment to go get a coke from one of the vending machines next to the pool in his complex. Afterwards we went and threw around some bricks in the strip mall they were building next door. A few years later, I’d be spending a lot of time in this strip mall b/c a friend of mine working at 7-11 would look the other way while I stole food. He felt bad for me b/c I was living in my car.
I remember playing endless games of computer baseball. I remember we invented a game called tapeball—a pitcher v. batter version of baseball that involved balls made from rolled up newspaper & duct tape. We’d play it at different elementary schools and their empty ballfields.
I remember someone on our route tipping us w/a couple cans of beer and us not really enjoying the taste.
I remember being young and hopelessly naive, and looking back on it we weren’t quite ready to plunge headlong into adolescence, and by spending so much time together we were able to turn a potentially awkward time into something considerably less lonely.
I remember he really liked this cassette by The Fixx and that I really, really did not.
‘Stand or Fall’ was okay, I guess.
I remember he convinced me to buy this cassette by The Outfield that was horrible.
I remember never feeling bored and even when we argued it was still kind of fun.

I know this is a weird approach for a eulogy—a lot of information about me and not very much about Nick Marsh, but there’s a couple of reasons for that. One, there’s no point in writing yet another Wikipedia-type article about the band. Those are great, and they totally have their purpose, but (and this is the other reason), I’m not sure it does justice to the music. Facts are great, and they have a lot to do with Nick Marsh’s life, but not so much about his music. It must be strange being a musician. People know so much about you, but you never know that much about them. Not really. And you don’t always know how your music may have affected their lives. When I saw the news that Nick Marsh had died, I was hit by a flood of memories from a summer that I haven’t really thought about in a long time. And Flesh For Lulu weren’t the greatest band who ever existed, they may not have even been the greatest band of 1987 (that’s Shriekback, obviously), but they meant a great deal to me.

And obviously, they still mean a great deal to me.

I remember arguing with John whether he sang “I never get enough of your party tricks” or “ball of tricks”. I don’t know which side I argued then, but it definitely sounds like ‘party’ now. It seemed very important at the time.

I haven’t thought about any of this stuff in a long time. And who knows when I would have thought of it again. But because Nick Marsh died on Friday after a long and heroic battle with cancer I am thinking about it today. Floods and waves of memories. All that appropriate ocean imagery—so much alive & writhing beneath the surface. I remember a couple weeks ago when B.B. King died and they honored him before that night’s Memphis Grizzlies game saying that I thought it was bullshit how we wait until someone dies before they honor them. Like why not honor them while they’re still around. And I think tonight maybe I understand why.

Because it isn’t until their death that we really understand how important they were to us.

I’ve read before that smell is the sense most tied to our memories, but I think that’s bullshit. It’s music. And because of the music Flesh For Lulu released almost 30 years ago, I’m nearly drowning in them tonight.

One Response to Nick Marsh of Flesh For Lulu | Death & Remembrance