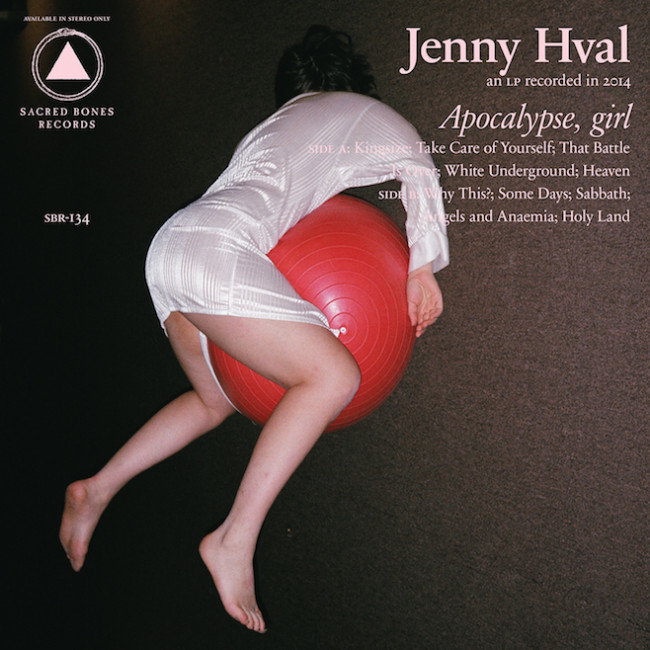 The Paula Deen of Rock Critics?

Whatever. Here’s some stuff that came out in June. I’m not going to bother embedding pictures and links and playlists–you’re smart enough to find that stuff if you’re interested. Albums scored on the world famous Collapse Board scale—because all other evaluating systems are for cowards. Where others equivocate, we deem ourselves emperors.

Album of the month. ET explains why here. And I explain why (and explain, and explain) here. Someone came up to me the other night and told me my Jenny Hval review changed her life. I forgot to ask whether it was for the better. This is one of those albums that can, if you’re not careful, leave you a devastated, empuddled mess.

It’s been all downhill for FF since that first single (and their hill wasn’t all that high up to begin with), but goddamn if S doesn’t light a fire under them. And goddamn if FF doesn’t return the favor, kicking S out of their 40 year hermetically-sealed bubble. Everyone wins.

Better known for the people he’s worked with, it’s a shame more of them didn’t show up to help. Sonically impressive as hell, but get past the static & the scuzz and half of this sounds like a soundtrack to either a shitty 80’s movie or a great 80’s video game.

Old croakey’s back. Those gollum comparisons seem quaint now—you can actually understand Tolkien’s monster when he speaks. The band bashes away obliviously while MES is subsumed by his schtick. There’s at least 18 Fall albums better than this one and that’s not including the comps. Just because someone’s a legend doesn’t mean they’re not human.

Old whiney’s back. There’s at least 18 Neil Young albums better than this one and that’s not including the comps. Just because someone’s a legend doesn’t mean they’re not human.

Now this here is great. Cryptic & ethereal & electronic & mortifying. Who needs drugs & sex & nature when there’s albums like this being made?

So it’s official now, this is the second golden age of hip-hop, right? Here’s another future classic to make your case. Staples is smart, he’s angry, and he raps w/an assassin’s sense of calm. In the opening minute of ‘Summertime’, Clams Casino rearranges space & time in a way that makes last year’s Aphex Twin (album of the year in experimental music mag The Wire) seem oh so quaint.

Meek’s more silver than golden, but ‘R.I.C.O.’ is great enough to make guest-star Drake sound convincing. The album’s unfocused as hell—you keep waiting for it to explode, but Meek keeps either falling asleep or leaving the room.

More like Constipation than Catharsis, it’s enjoyable enough for their sound—post punk w/the treble all the way up, sketchy & scratchy. It’s all done very well but doing very well was never the point of post-punk and it’s hard to say what the point of this album is. It’s better than, say, Father John Misty, but we all deserve better than better than that.

Everyone knows that dolphins & whales are the most advanced lifeforms on the planet, but only Russell made music that sounds like something they’d actually listen to, which is just one more reason why his music is so incredibly special. If this doesn’t move you, I question your heart.

Gives science-fiction a bad name. Still not as bad as Sense8, the new Wachowski tv show, but that’s only b/c it’s shorter. The brilliant Tiarney Miekus covered this monstrosity in full.

What’s cute in a child can quickly turn cloying in an adult, and few people understand this better than Ben Lee. An album so empty & upbeat that it would fit seamlessly into the rotation of your standard christ-pop radio. He almost gets away w/the line ‘God is a fire that embraces us’ until he adds ‘in our happy heart’, and even Hillsong United start laughing at the banality of it all. If he wasn’t Australian, and CB wasn’t nominally an Australian website, I would have just ignored this.

In their endless excavation of mundane personal details, the lyrics give Karl Ove Knausgard a bad name. In their lack of melody & dynamics, the music gives music a bad name. No, he’s not a very nice guy, but neither are most of us. Hate him for his boring-ass music not b/c he calls people names like an unreformed middle-schooler.