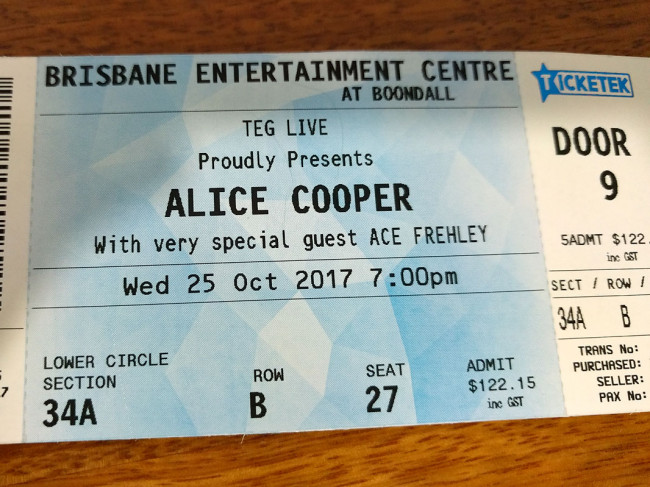 Anytime you come across a review of an Alice Cooper show, you’re almost guaranteed to see two constants.  The first is the words telling about how the audience ranged from eight to eighty.  The second is the related text, and often concluding paragraph, about how it’s been a night of fun for all the family.  Obviously both of these statements have their basis in actual facts (even if they highlight a collectively dull imagination on behalf of the reviewers) but they also demonstrate that the focus of an Alice Cooper live review is the theatrics of the live performance.  To your typical music writer, the stage settings and props trump the songs every time and the lack of focus on Alice Cooper as a songwriter is one of music journalism’s great injustices.

Bob Dylan is on record as thinking that he’s a very underrated songwriter, Frank Sinatra covered him, Johnny Rotten’s sang an Alice Cooper song for his Sex Pistol’s audition.  The original Alice Cooper band, when Alice Cooper was the name of the band, not just the singer, is one of rock music’s most underrated bands and yet the Alice Cooper/Dennis Dunaway/Michael Bruce/Glen Buxton/Neal Smith five piece never get the kudos they deserve, the adulation saved for contemporaries like The Stooges and the MC5.

You can’t bring back people time and again over a near fifty year career if you’ve only got the performance but not the songs and Cooper has always had the songs.  Although the last truly ‘classic’ album Cooper released was 1994’s The Last Temptation, every album he has released since has had its fill of strong songs.  A ‘compilation of the Best Of’ Alice Cooper from the last 25 years would still be an album worth listening to.  This year’s Paranormal is probably the most consistent album since The Last Temptation and yet despite being less than six months old, only one song, the album’s first single, ‘Paranoiac Personality’, is included in tonight’s setlist.

As with many of the older generation of musicians still playing today, the majority of the setlists write themselves for each and every tour.  If you’ve seen Alice Cooper in the last decade or so, you will have seen most of the songs played tonight.  Given that most of these come from 40 and more years ago, if you’ve seen Alice Cooper in the last four decades you’ve probably seen most of the songs that get played tonight and which have formed the core of the setlist for this current tour.  For the Australian dates, the only change has been swapping in ‘Department of Youth’ for ‘Lost in America’ for the second half of shows in the country.  As a musician, Cooper has always been a risk-take; you can easily argue that he’s hard rock music’s David Bowie, changing musical direction and the musicians he works with every few albums.

This lack of risk taking with regard to the live shows is the show’s greatest weakness.  Although Cooper is at an age where he doesn’t need to deviate much from the script, there’s so much untapped potential that could be used to freshen up the show and there seems to be little excuse for not being able to change things around.  It’s not just that there are plenty of songs from a classic era that rarely get played, there are entire albums that have never had any songs played live.  Cooper’s live current band is first rate, you would expect that they are more than capable of adding to their Alice Cooper song repertoire.  Most importantly, the theatrics have been paired down from some previous tours, the ones where Cooper was executed three times compared to the single guillotine moment in this show, so it’s the songs driving the set list more so than the song choice being driven by the theatrics.

These criticisms are obviously criticisms based on personal experiences and expectations.  In itself, as a standalone experience, it is fun and the songs are great.  Cooper is still in pretty robust voice, a bit rough around the edges at times but not to the detriment of the songs.  The band is excellent (even if no one really needs drum solos in 2017).  The setlist is good, so many classics that it’s always good to hear, it’s just that nagging desire to hear more, to her something different, something unexpected.  That moment happens a couple of times during tonight’s performance, firstly when ‘Pain’ from 1980’s foray into New Waves’ Flush The Fashion gets an early airing in the set and secondly when ‘Halo of Flies’ from 1971’s Killer gets played and becomes the centrepiece of tonight’s show.  Both these songs are thrilling in their unexpectedness and the highlights of the evening.  These two songs show what could be if Cooper relied less on the expected setlist and was prepared to take more risks in the song selection.

In 2017, an Alice Cooper show is still a big drawcard (indeed a number of show on this Australian leg of the tour were upgraded to larger venues).  As all those review tell you, it is an evening of fun-filled entertainment for all the family, everyone from eight to eighty.  If there is a next time, I’ll be there again, there’s no question of missing out, but as always, I’ll be hoping to get surprised and see Cooper and his band taking a few more risks with the song selection.