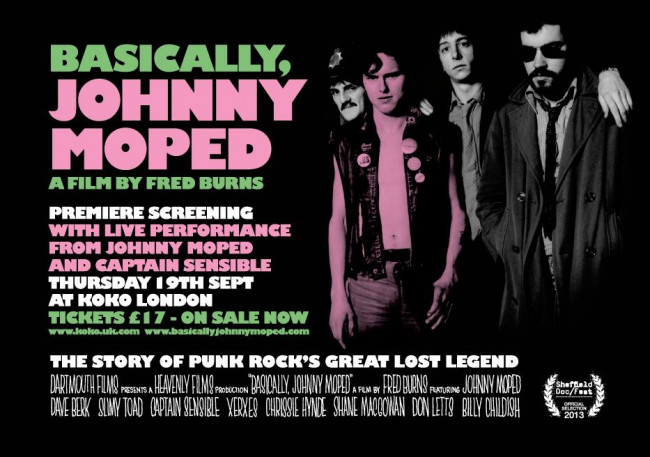 It seems like a fairytale now, but once upon a time you could take a bunch of random oddballs from any orange-bricked, worn-grass satellite of a British city, give them Woolworth’s instruments, allow them to articulate their unselfconscious piss-takings onto a tape machine, and they would be on the front page of national magazines and playing to a packed house near you, while their shiny mugshots leered at you from the post office singles bin. Their carelessness about careers, or even the following day, might eventually be preserved as a cultural signpost on film, and one such document was given its first public airing tonight – at the Koko in London, 19 September 2013.

These fairytales happened on a weekly and nationwide basis for perhaps a decade, and some of the beneficiaries were a bunch of remedials and ne’er-do wells from Croydon called Johnny Moped, in love with Arthur Brown and Hawkwind and Buddy Holly, never really under the illusion that their music would take them very far from Surrey. Like many other gangs of kids with endless summers and endless nothing to do, they left school cluelessly and worked as labourers and toilet cleaners, getting high on their work products and showing off to themselves and their sourpuss neighbours by making a big racket in front rooms and gardens, plus the occasional local festival before they got turfed out.

Then, a series of chaotically serendipitous events occurred, as they often did in the golden age of chancers. The somewhat crazed guitarist, nicknamed Captain Sensible because he was anything but, joined a group of clued-up individuals called The Damned, who immediately started playing real gigs at real venues, and appearing in real papers and on real TV. An American woman called Chrissie Hynde answered an advert placed by the drummer, Dave, and the Mr Punch lookalike guitarist (now trading under the name Slimy Toad) became the singer in their other band, The Unusuals, formed because they wanted a more reliable outfit to play with than their slightly unhinged schoolfriends.

Their own singer, nicknamed Johnny Moped for his somewhat over-ambitious desire to be an outlaw biker, had been diverted by his girlfriend, Brenda, 20 years his senior at 40-years-old, who objected to his new-found opportunities as a ‘punk’, as they would prevent him from looking after her (as was thought proper then). The band – now also christened Johnny Moped, and merged with The Unusuals – discovered a genius for kidnapping, ensuring that the reinstated singer could make gigs and recording sessions. And a couple called Andy Czezowski and Susan Carrington – not afraid of seizing an opportunity – opened a club called the Roxy in Covent Garden, with a free rein for booking and no fire regulations to speak of, and through their Damned connection the band were able to play on a weekly basis.

Here’s Chrissie with a pirate hat at the Roxy in 1977, proclaiming herself a “hard-lovin’ man” along with a tuxedoed Johnny:

The hapless American was then sacked – it’s her or me, said Slimy, and she still looks genuinely gutted to have been given the elbow. Her lasting legacy was to give the bassist and drummer the surname Berk, because they looked like berks.

To call Johnny a loose cannon would be an underestimation of his abilities to bring guileless chaos to all around him, whether by failing to turn up to performances, riding out-of-control motorcycles through free festival crowds, or queuing up for his own gig as he didn’t know how to get in any other way.

Slimy Toad, Dave Berk, and Fred Berk (the bass player) always said that Johnny was the talent and his unconstrained concerns – he was 82% mentally disabled, he loved to say – bled all over the gear-shifting, buzzsaw guitars. They left a handful of recordings. A key ’77, 7-inch indie entitled ‘No One’ and backed with ‘Incendiary Device’ is the best, the first song filled with the dread of the knowledge that you’re born alone and will die alone, the second with the kind of cartoonish misogynistic violence that many working class schoolboy nihilists grew up with and didn’t mean.

The second single, I think he did mean. ‘Darling, Let’s Have Another Baby’, was taken as a joke at the time – a singalong, sentimental view of families and relationships, probably meant partly to appease the fearsome Brenda and her mother-in-law, the kind then-lambasted by bow-tied comedians. Brenda can be seen endearingly singing the song with her husband here:

There was an LP too, the title a clumsily-punned Cycledelic, filled with short bursts of sincere piss-taking called ‘VD Boiler’, ‘Panic Button’, ‘Groovy Ruby’, ‘Maniac’, peppered with shouting, belching, laughter, screams, a foghorn of a Croydon singing voice, Quality Street-tin drums and curiously deft and layered guitars, almost tripping over themselves in their distorted rush to get to the end.

And that was it. The new wave splashed on, leaving the jetsam of Johnny Moped playing gigs in shopping centre car parks out of the back of a Transit van, not really noticing that their dreams had shattered, still with the eternal have-a-go confidence.

But your friends and children look after you in your old age, you hope, and ex-guitarist Captain Sensible’s son Fred Burns, now a filmmaker, became fascinated by the yarns his dad’s old mates told, fascinated enough to think there might be a film in it.

There was, and tonight’s screening, seguing into a performance of the surviving members of Johnny Moped, including old man Sensible, showed that merely creating something because there’s nothing else to do is validation in itself, should it be needed, and that elements of even the most flash in the pan movements will at least partially resist the erosions of history and time.

The framework and format of the film will be familiar to anyone who has seen Oil City Confidential, and it’s almost as good a document of late 70s energy and naivete. The subjects being more obscure and not regarded as so ‘culturally significant’, makes the film less of a tale of artistic persistence and heroism, and more of a document of how the access-for-all spirit of a certain time could open doors, allowing the fool’s confidence of having nothing to lose to run with its options, but perhaps also that ‘not for the likes of us’ self-deprecation could scupper achievement at the same time.

But achievements there were, despite. The audience isn’t entirely filled with greying Sids and barmaid punkettes, there are 20- and 30-somethings singing along to ‘VD Boiler’, and fearsome rockabilly girls chanting the gender-terrorist lyrics to ‘Incendiary Device’, turning them on their head. There’s even a small moshpit with authentic pogoing.

Lovers of the nitty-gritty history of punk, the killed-by-death collectors, the internet archivists, are beside themselves. Johnny himself is still charismatic, creating anticipation by beginning to sing off-stage, though his bemused squint is now permanent, and we get a frequent flash of manly side-boob from under his historically familiar leather jerkin. The band is still bedecked in wacky headgear and cracks up at the few mistakes. Andy and Susan, originators of the Roxy club, smile and nod time imperiously from the royal box, while a small coterie of the influenced, from Medway and Brighton, jostle and grin. However, Brenda, who once sat on a chair among pogoing punks and refused to move even when she kept getting knocked over, is too ill to come and see her husband’s reappraisal.

The film tells the story with more than enough anecdotes to fill a sozzled evening with sarcy old rockers in the pub, and you get a flavour of the speed and spunk of those times. But the way their briefly-feted career fizzled out is no resolution for the arc of a film’s story, so they’ve provided their own in the form of this gig.

One Response to Basically, Johnny Moped