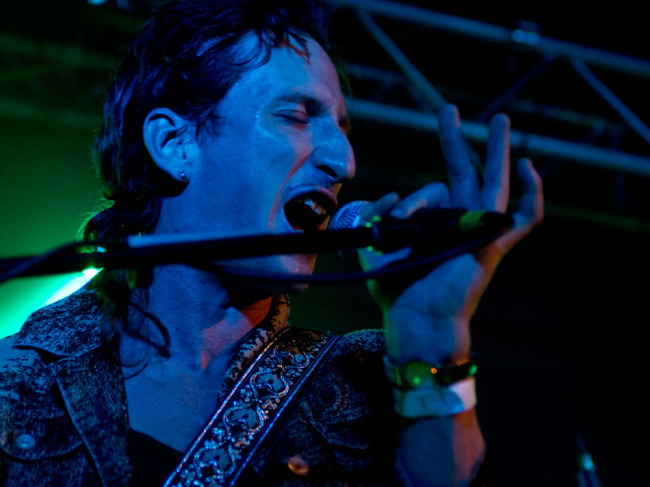 The lineup for this year’s Blurst of Times Festival seems to focus heavily on hyped Triple-J acts and newly-formed rock bands from across the country. The announcement of Kirin J Callinan to share the final spot on the bill with Dune Rats was enough to drive up my excitement for the night, despite the abundance of average indie rock bands squashed together in the middle of the night.

I arrive early at the Brightside carpark to catch Woodboot, one of the most in your face and exciting punk bands in Australia at the moment. Although most of the crowd begin standing off to the side socialising and waiting for the more higher-profile bands of the night to take stage, Woodboot’s blistering set manages to win over those few of us who made the wise decision to turn up so early. The unrelenting energy of the tracks from latest LP Crime Time is even more apparent in a live setting, especially with the ferocious drumming of Donovan Miller.

Across at The Foundry are local act Deafcult. Frequently referred to as a ‘shoegaze’ band, the four lead guitarists crammed onto stage crank out a distorted wall of noise which is immediately reminiscent of The Jesus and Mary Chain. The fuzzed out texture of the guitars is accompanied by gentle dream-like pop harmonies. It all adds up to give off a surreal, cathartic effect that has me hooked from start to finish.

Back at the Brightside carpark, the crowd is beginning to fill up as a 5-piece from Sydney called Australia takes the stage. More of a straight-ahead rock band than the evening’s previous acts, driven by riffs and occasional synth flourishes, they woo the crowd in a very short time They are undeniably full of energy onstage, the synth player at one point taking off his shirt and running across the stage to yell the lyrics at other band members. The fun atmosphere they create makes up for the lack of dynamics that becomes apparent towards the end of the set.

Inside at the mainstage of The Brightside is little-known local solo act Simi Lacroix. I knew nothing about him beforehand, and was surprised to see an exuberant solo dance act complete with a moustache and suspenders keeping up his daggy grey trousers. Most of the set features his surprisingly soulful vocals over pre-set backing tracks which are very 80’s synth-pop in style. Waltzing around stage and encouraging the audience to move to the front and dance, it has the vibe of a karaoke party. It’s all good fun and he manages to produce a few decent tunes but it becomes a bit too gimmicky and one-dimensional by the end of the set.

After a tough decision to skip excellent local band The Goon Sax to keep seeing bands I haven’t encountered before, I end up watching local rock act Hound’s set. Their brand of driving pop-rock is a hit with the relatively small crowd gathered inside The Brightside. Directly in front of the stage a mass of teens jump and mosh to each track as Hound continue to grind out catchy post-punk throughout the entire set.

Up next, massively hyped Perth band Methyl Ethel play to a tightly packed audience at the carpark. They reveal themselves to be a pretty dull psych pop act, kind of like a watered-down Tame Impala.  The band is a 3-piece, but is mainly the project of frontman Jake Webb. Their set is very smooth and straightforward but without the requisite killer pop-hooks found in many of the country’s best psych bands. At this point I’m starting to regret skipping The Goon Sax.

Back at The Foundry, Melbourne’s The Murlocs deliver an excellent set despite a few sound difficulties. The energetic 5-piece shares members and a record label with King Gizzard and the Lizzard Wizard, and play garage rock without the psychedelic twist of their label mates. The set bursts with enthusiasm, and was one of the highlights of the night.

Bad//Dreems play their brand of catchy 70’s-style rock to the packed-out Brightside carpark. Their set consists of a string of quick punk-influenced numbers with a few long-form jams to break it all up. Long-haired skaters push their way to the front and crowd surf in reaction to the sheer energy of the Adelaide band. Like Hound earlier, it’s a simple formula but the enthusiasm and pop sensibilities work handily in a live festival context.

After catching the end of The Moses Gunn Collective’s odd performance of glitter, indie-pop and choreographed dancing, it’s time for my most anticipated set of the night: Kirin J Callinan. The controversial singer-songwriter takes the stage in a kilt before greeting the audience with a creepy smile. With much of the audience not knowing what to expect, Kirin and his two bandmates break into a string of dark gothic dance music with eccentric and often heavily effected vocals. The performance is off-putting and captivating in a way that only Kirin J Callinan can achieve. At odds with a great deal of the bands on display tonight, he’s met with the inevitable hecklers yelling out “this is bullshit mate”. He sarcastically offers the hecklers to join him on stage and responds to a request to play “a chilled song” with the most abrasive track of the night. The encore consists of solo vocal tracks, a “medieval” collaboration with a harpist and an extended performance of ‘The Toddler’ interspersed with stand-up comedy and audience participation. For sheer charisma and spectacle alone, Callinan’s tops everyone else at the festival and of course it helps that his song-writing was top-notch as usual.

Kirin J Callinan’s confounding and hilarious set was all I could think about when leaving the festival. The rest of the night was punctuated with the occasional excellent local act but with a few too many middling indie rock bands to compete with line-ups from previous years.