I Know Why The Caged Grrrl Sings (Tuff Enuff) 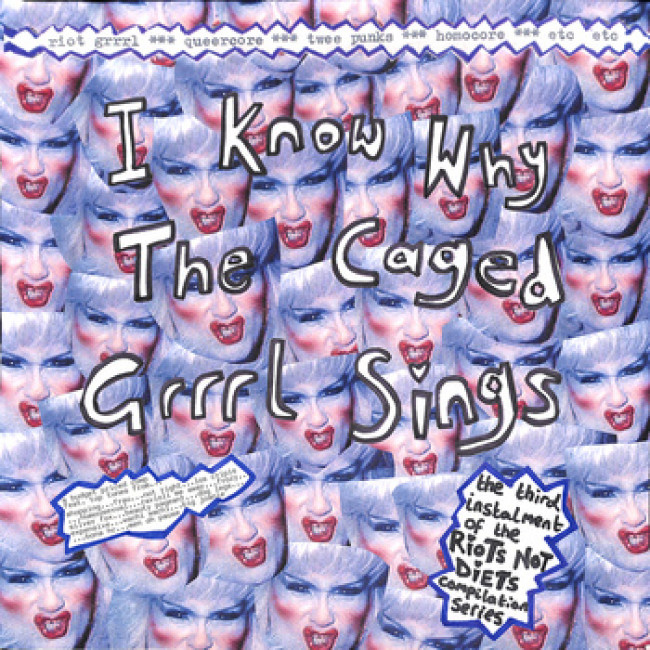 This week – well, apart from stoking the forest fire that should spark on this post – we shall keep the good vibes rolling by hyping the hell out of the new compilation from Brighton saviors Tuff Enuff.

Like actual snakeskin, the tune crackles and peels off as the body slithers on. In this case, however, the snake is trapped in a narrow glass case and keeps smacking against the walls – BANG BANG BANG BANG! – until it breaks free (and bites yr ankle off).

No, not everyone can make this sort of racket. Well, theoretically, we can – but we all got skin to hide our guts, don’t we, and the humdrum, ground-down stiffs want you to keep that skin zipped tight. Men and women alike, but especially women.

They also want you to keep yr panties on. But that’s another story.

Anyway, it’s good tidings for a raucous 40-odd minutes of unadulterated fun, untainted by celluloid rock star egos. More than that, though – the label’s created a shiny blue platform for folks that might not otherwise be heard. Self-promotion ain’t for everybody. Some of us lack the confidence. Some of us hate to foist our meager works onto others. For others, that nasty spiral of silence sucks them in and the tide of public opinion seems too swift to swim against.

Don’t think for one second, though, you can draw a clean line and sort the stuff on this comp between “pissed as fuck” and “sensible twee”.

See, Ravioli Me Away know what’s up. Or maybe they don’t. Necessity spurns the most creative ideas, after all. Wire were a lean machine because none of the four art-school studs considered themselves “musicians”. So maybe none of the lovely girls in the band know how to play guitar. But that’s fine, ‘cos this bass could keep bouncing for another ten minutes if it so desired.

I love the snappy snare. The haze of echo voices and electric organ. It’s such a haze – you feel like you’re trapped in someone’s head as she’s walking home, brooding over some affair that probably didn’t end well. Too soon to tell, though, and at any rate you’ve got to keep walking, even as bits of the conversation replay over and over in your head…

WHERE ARE ALL THE GIRLS?

Mind, I’ve got nothing against a dainty dish of knock-about pop. You remember the charmingly bratty Dog Legs, after all. And who can say no to the barely audible vocals behind the happy Beat Happening thump of Big Joanie’s “Damaged (When The Homewrecker Moved In)”? Best of all in this vein is Silver Fox‘s super-catchy “Bed Bed Bed” – especially the perfectly-timed “oops!” between the cheery pounding (Delta 5 on holiday?) beat.

But there are others that fight the DYI stereotype – behold, for instance, Expensive’s lovely synthpop set, a glint of morning sunshine in the lo-fi basement. Or Beauty Pageant, who offer the best track to clear out unwanted guests from your bedroom. SQUONK SQUONK SQUONK SQUONK!

Not everyone on this comp is in it to win it, clearly. But just because the lofty dudes on top hog the limelight doesn’t mean ya can’t still pick up some instrument and make some noise.

Look, last night I went out and saw yet another painful rawk duo, and the dude with the guitar called his girlfriend onto the stage to sing with him. That’s not being feminist, dude. Especially when the girl’s trying to sing in the mic and can’t, and yet you drown her voice in your guitar-wankery anyway. That’s only cementing the woman down as second-fiddle.