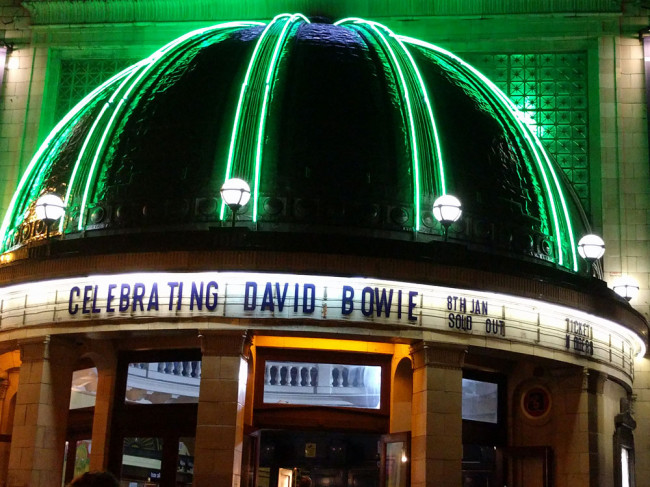 Conveniently being in London for a few days at the right time and fortuitously seeing on Twitter early in the morning that a few last minute tickets for that night’s Celebrating David Bowie show at Brixton Academy had been released, the decision to buy tickets was a harder decision than it should have been.  What do you get from a tribute night? What do you expect? What do you want?  Ultimately it was a case of putting faith in a band featuring Bowie alumni such as Mike Garson, Earl Slick, Adrian Belew and Gail Ann Dorsey, plus Gary Oldman, who was putting the show together, and hoping that they’d picked some interesting singers, but also knowing that at worst you’d be seeing a really good band.

What I didn’t expect was for there to almost be a punch up right next to us even before the show had even started, thanks to a couple of latecomers pushing their way through the crowd to get a bit closer to the stage.  A couple of songs in, I can overhear an even worse moment happening behind me with some Cockney wanker, obviously also pushing through, mansplaining to a women “Have you ever been to a gig before love, well this is what happens” and then telling her to “Do one, love” when she protests further.  It’s just the absolute worst.

I didn’t expect the night to start with Gary Oldman singing Earthling’s ‘Dead Man Walking’.  It’s a slightly odd choice of song, especially given the situation although Oldman does a surprisingly good Bowie impression.

I was hoping that it wouldn’t be too schmaltzy and that there wouldn’t be too much in the way of off-the-cuff spoken tributes and thankfully this was largely avoided, apart from at the very end of the night.  I was expecting that there might be some multi-media going on, between song clips, perhaps Bowie talking about the song that was about to be played, but there was nothing, not even a backdrop.

Brixton Academy, or the O2 Academy Brixton as it calls itself these days, was always one of my favourite venues to see a band, thanks to a sloping floor that meant you had a good view from wherever you were, but the sound was usually not that great.   More than a decade after my last visit, nothing much has changed and the sound is muddy enough to make any of Mike Garson’s introductions for the singers largely inaudible.

I wasn’t expecting that the highlight of the night would be ‘Five Years’, by singer Gaby Moreno.  After the show, I have to Google her as I have never heard of her before but she delivers a stunning vocal performance, one that’s head and shoulders above everyone else who performs on the night. It’s shame it’s so early on in the set as she sets the bar impossibly high for everyone that has to follow her.  The setlist that’s published after the show has a number of songs with a black line through them, including her returning to sing ‘Wild Is The Wind’.  It’s disappointing to find out that she didn’t get another chance to front the band for a second song; you can only dream what she would have done with it.

I wasn’t expecting La Roux to murder ‘Golden Years’.  It’s the worst performance of the night but I’m not sure if there are technical issues as there’s problems with both the lead and backing vocals, as if no one knows exactly where they are in the song.  It’s demanding for someone to take control, put the song out of its misery and start it over again.

I wasn’t expecting Fishbone’s Angelo Moore to have been invited to perform a few songs but he also provides some of the evening’s highlights, providing much needed theatrics and flamboyance in ‘Ashes To Ashes’ and ‘Moonage Daydream’ (the second best song of the night) that no one else seemed to have thought about.

I really wasn’t expecting it to be so male, so unexciting male rock and so straight as it is.  When they chose Lorde to play the Bowie tribute at last year’s Brit Awards, they got it so right and I just don’t think they did tonight.

If you want to talk numbers, of the thirty one songs played tonight, 22.5 are sung by 13 male singers versus 8.5 sung by five female singers (the half for the male/female duet of ‘Under Pressure’ that closes the night, although surprisingly not featuring Gail Ann Dorsey who sung it with Bowie all those years).

I wasn’t expecting them to play it so safe with the set list, one that deferred to the classic greatest hits. Although you can only play so many songs in three hours and It might be what the majority of the crowd wanted, it was never like Bowie to play it safe. The only real surprises were the aforementioned ‘Dead Man Walking’, Aladinsane’s closing ‘Lady Grinning Soul’ and a clever arrangement of ‘Loving The Alien’ in the encores.

I wasn’t expecting them to largely ignore the last three decades of David Bowie’s work.  Only three songs came from the post Let’s Dance period; ‘Loving the Alien’, Dead Man Walking’ and ‘Where Are We Now’, meaning nothing from Never Let Me Down, Black Tie White Noise, 1.Outside, hours…, Heathen, Reality or Blackstar, nothing from the two Tin Machine albums, nothing from any of his soundtrack albums, not even a cheeky ‘Absolute Beginners’, one of his finest singles and something I thought they might slip in somewhere during the night.  Then again, 1.Outside is one of my favourite Bowie albums and I’m always trying to convince people as to the genius of the first Tin Machine album so maybe it’s just me lamenting the night’s omissions.  I was expecting that given everything that’s happened in the last year, they might have played something from Blackstar but it wasn’t to be.

You can’t really fault the quality of the songs that were played, it’s one of rock music’s great songbooks, even with questions about other songs that could have been included.  But it plays too safe with the song choices, with the guest singers. Without Bowie’s presence out front, there’s a lack of a focal point leading the songs.  The band is faultless and it’s a complete thrill to see and hear Earl Slick play his guitar parts on the Station to Station songs (probably my favourite Bowie album if I have to choose only one) and Adrian Belew provide the manic frenzied guitar sounds on the Berlin period songs and to Robert Fripp Scary Monsters parts as well as his exquisite instrumental solo acoustic guitar ‘Life on Mars?’ that provides the elongated introduction in to the full band version of the song.  Experiencing Mike Garson’s ‘Aladdin Sane’ piano solo is something that never fails to excite, while Gail Ann Dorsey’s vocals on the song, plus her fronting of ‘Young Americans’ and ‘Space Oddity’ are among the night’s high points.

It’s not the night I expected, even though I wasn’t quite sure what I did expect in advance.  But maybe with Bowie you expected the unexpected and this is where tonight largely misses the mark.  A good night but not a great night.  Hopefully when it comes around to celebrating David Bowie’s 80th birthday they will have fixed some of these deficiencies.