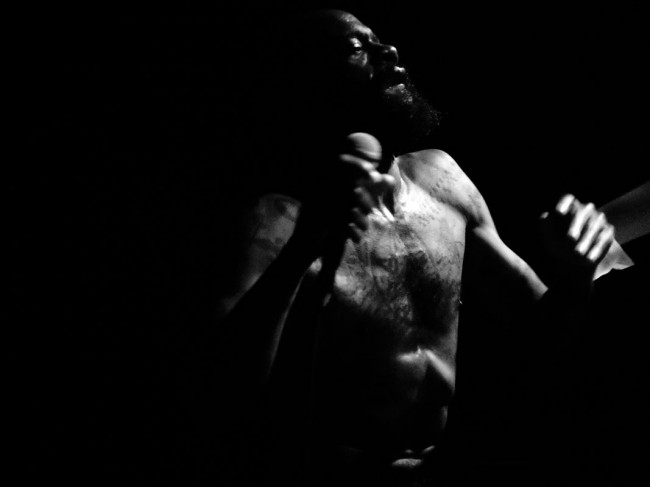 Death Grips have spent the last six years delivering a unique style of music that infuses elements of punk and noise rock into a hip-hop framework. Back when they released their first mix-tape Exmilitary and their debut studio album The Money Store, they quickly attracted much acclaim for their innovative blend of genres which would eventually influence many dark and abrasive hip-hop acts to follow. During a prolific career filled with confrontation and controversy, they had only previously been to Australia once, for Big Day Out in 2013, with this being their first venue gig in Brisbane. Having been a fan for five years, I’m excited to see how their work translates to the live stage.

Before their set, the young audience (the vast majority seemed to be in their late teen’s or early 20’s) are noticeably restless and full of energy. By the time Death Grips arrive on stage, the fans at the front had been breaking into chants and cheering at any change of lighting or appearance of a stagehand for nearly an hour. This level of anticipation is matched by the amount of energy that is sustained throughout their performance.

Death Grips take to the stage at 10:30 and tear through a 17-track performance spanning material from each of their full-length releases. Their set, as expected, is one of relentless intensity and pure adrenaline. While their albums often break up the unbridled energy with more moody and atmospheric sections, their live show solely includes tracks that will rouse the audience and keep up that energy for the full hour and a half. They also achieve this through the lack of breaks between songs, allowing no room to take a breather and applause.

Stand-out tracks ‘No Love’ and ‘I’ve Seen Footage’ are cathartic in a way that you’d usually expect from a hard-core punk or metal show. Andy Morin’s samples and abrasive electronics being played at such a piercing volume takes these fan favourites to a much higher level of excitement. ‘Hot Head’ and ‘Spikes’ from their latest album Bottomless Pit also work fantastically live, with MC Ride belting out his vocals with manic energy and Zach Hill pounding away at his drum-set in one of the most impressive drumming performances I’ve seen in a long time. Hill, having shown his prowess in the noise-rock band Hella for over a decade, is excellent in providing an anchor to the often chaotic nature of their music. It is a thrill to finally be able to see him play live.

The crowd is predictably wild and uncontrollable in response to the music, especially towards the front in the mosh-pit. Standing towards the back of the venue, I see many passed-out or disruptive fans being brought out by security and many people heading to the back looking completely exhausted. As the relatively quick set ends to the audience chanting for an encore that would not arrive, Death Grips have delivered an excellent performance full of sustained energy and featuring much of their best-regarded material.

This performance demonstrates that Death Grips are one of the most exciting current live acts, blending several disparate genres and presenting it with an unrelenting surge of adrenaline. The show delivers on every front that a fan of the group would be hoping for.