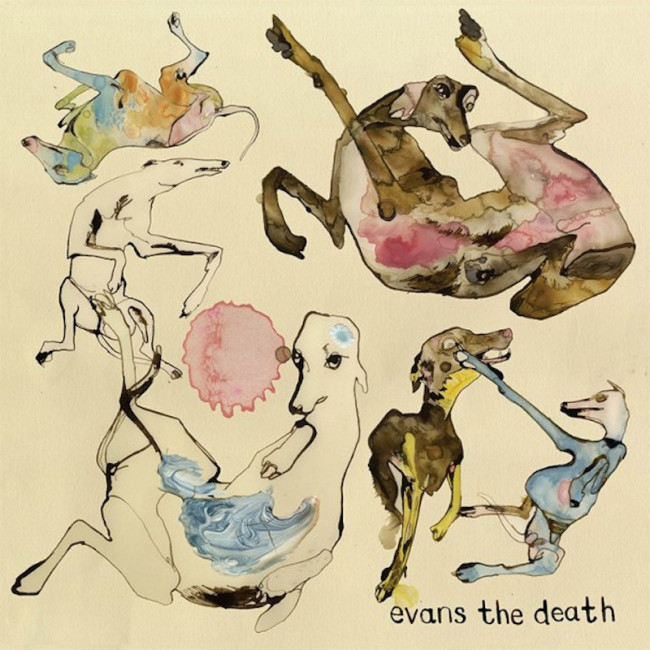 Evans The Death return with their second LP ‘Expect Delays’. The record constantly shifts focus from sprightly jangle pop to something much darker – often jumping between the two at a moment’s notice. The song writing is now shared between Moss brothers Dan and Olly and this makes the record less uniform than its predecessor where Dan took on the lion’s share of the song writing. Katherine Whitaker’s vocals are the cohesive thread that stitches the LP together. It is her voice that soars and draws you in. And once you are paying attention you are confronted by the subject matter at hand, be it shit jobs, drinking to survive, failure and the helplessness that often comes when dealing with bouts of depression.

‘Expect Delays’ is a beautiful sprawling mess. The band that released their debut LP in wave of euphoria and expectation only for their dreams of to be dashed when the record failed to take off are older and possibly wiser now. The band could well have scuttled off and given in but they found themselves in limbo between their hopes and the tough reality of trying to make it in 2015.. They could’ve packed their bags for university and been in the graduates job market right now. But somehow they’ve stuck together (saying that they have shed members and gained a new drummer) and spent the three years since their debut album slowly refining and evolving Evans The Death.

‘Expect Delays’ is relentlessly bleak. And it’s still a beautiful sprawling mess. It stretches out and punches hard. At their heart the band are still a noisy guitar pop band and there is nothing bad about that because I love a good noisy guitar pop band. But I do prefer it when a pop band has a bit of a bite and Evans The Death are certainly becoming a band that’s not afraid to snarl and show their teeth. They hit harder now. They also aren’t afraid to mess things up a bit. Evans The Death have moved on and they’ve got a lot stranger and braver on this record. Don’t get me wrong this isn’t an experimental record the like of which Sonic Youth had a penchant for. This is still a fairly straight up rock/pop album but it is willing to throw a few surprises like the distortion heavy single ‘Enabler’. This might be the product of Dutch courage but by combining a noisier edge with bleaker lyrical themes the band are starting to find a sound that is more their own.

‘Expect Delays’ is proof that difficult second records are sometimes worth the wait for the listener. The band might have to wait a bit longer to gain that bigger audience they desire but this record is a massive step forward, delays or otherwise.