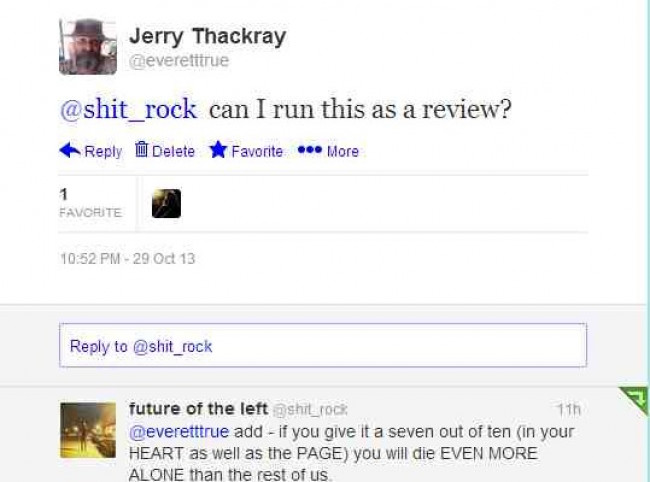 Many things occurred to me on reading your review of the new future of the left record ‘the plot against common sense’ and I would like to take this opportunity to debate with you some of the points you raise in the piece, although of course by ‘debate’ I mean ‘shut up and listen to me’.

According to the opening line of your review I am ‘something of a hero to you’. I would almost be flattered by this sentence if it were not for the level of qualification obliquely provided by the use of ‘something’ but will choose to skip over the ham-fisted arse-kissing of your opening and move on to deal with some of the more pertinent matters of the day.

As we approach the bottom of your first paragraph you refer to the ‘corporate slick production on future of the left’s third album’ (*1) – a question, my dear friend – would this be the kind of corporate slickness you get through recording an album in 16 days (using the same methods as ever) over a six month period in studio downtime and friend-financed to the tune of £2,000 (whilst we work in temporary jobs and with credit, when available, to support our habit) or instead the kind of corporate-slickness (since, as tone indicates, we’re using the term pejoratively) a person could get from writing for a site which has run the adverts of a variety of corporations, big and small, for many years? I may not be wearing my eyeglasses at this particular moment, but I can definitely see a lovely shiny one sitting atop your review at this very moment.

Oh … it has moving pictorials and everything – quite lovely!
How to respond to a Pitchfork review

I’ve talked about this with Everett True before that criticism should be considered a discussion, not someone delivering a verdict from on-high, and I think you said this in your response, a critic should be able to take criticism of their own work.

It depends, doesn’t it? A critic or a magazine or a publication, they speak with a certain legitimacy based on trust which has been built up over years. I grew up reading NME and Melody Maker, maybe not quite in the heyday, maybe it was just past what would be termed “the heyday,” but I remember reading six thousand word interviews with bands. Some of them by Everett True, actually, in which at times he talked about everything except the band. There’d be lengthy passages about rooms or his love life and nothing at all about the band. That’s what you get sometimes when someone like Everett True writes, and I fell in love with that kind of criticism. But that kind of criticism was, like you implied, it was alive. It was swimming in front of you and you felt that even as a reader you could dive into it and pull whole things out of it instead of being delivered a verdict from on-high.

For me, writing that response was all about maybe correcting some false assumptions. If somebody doesn’t like a record then they don’t like that record. You can’t persuade somebody to like a record unless you’ve got really nice tits. Or balls or whatever. Whatever you happen to have. There was something very particular about that review because it came a week or two before anything else came out about that record, and as independently-minded as people like to think they are, it’s possible to set a narrative at an early stage. For a band like us, where those good reviews are really the only way we get out into the world, I just thought it was important to head it off early. And also I just fucking love an argument. Julia always says I’m only genuinely alive when I’m arguing. Especially in a written format. I just revel in it. It’s not just about winning, although that’s part of it. It’s the whole process of it. It’s the mental disintegration of an opponent. Doesn’t that make me sound like a lovely person? No, I love it. But pride cometh before the fall and all that shit.
Future of the Left’s Andy Falkous: “I just fucking love an argument.” (interview: Jake Cleland)