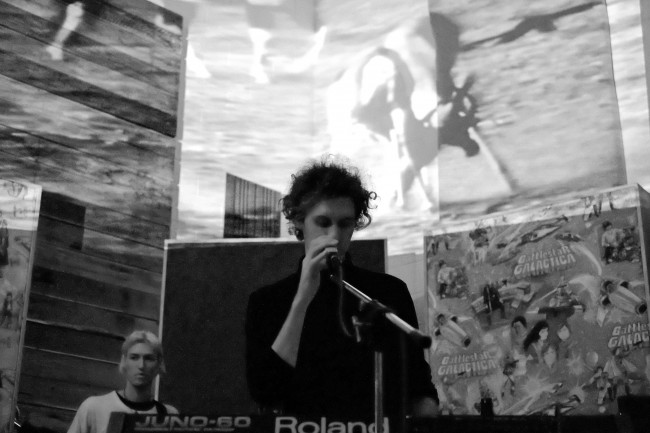 The mesmeric curtain of sound which is Glitter Veils’ Figures in Sight represented a remarkably polished debut for the Brisbane outfit when it dropped in February this year. While Figures has been circulating for a little over a month, the group has taken longer to make an appearance live. But it seems that the reveal was well worth the wait. Taking over the spacious yet intimate environs of West End’s Alchemix Studios, Glitter Veils are joined by Journeaux and Jeremy Mindharsh to premier their meticulously recorded LP live.

Opener Journeaux weave collages of jazzy breakbeats with a healthy accompaniment of bleep and bass. Jeremy Mindharsh follows on a similar vein, laying out a sprawling set of acid house-touched experimentation. While caressing a small studio’s worth of analogue equipment, his heady mix shifts between hypnotic and disconcerting. Primitively raw electronic sounds convalesce with the oscillating synth trills and warped drum loops, the free-form mass of Mindharsh’s continuous wall of sound eventually mutating into a burying climax.

While their debut record was a two-person project, live Glitter Veils expand to a formidable four-piece. With the group acting as soundboard for frontman Michael Whitney, the quartet construct a mess of visceral texture and noise. There’s something grandiose and cinematic to the group’s arrangements, which is an element that doesn’t disappoint when bringing their sound across in a live setting.

A seductive marriage of devotional lyrics and synthetic drums, set opener ‘Gibberish Talk’ projects off-kilter charm. The haunted centrepiece of their recorded efforts, ‘Gossamer Folds’, may lack some of the sweeping majesty and all-enveloping production of its album counterpart. Instead, cut live, the track puts across a more earthly sound, which none-the-less holds some equally resonant moments.

Guitarist Luke’s contributions sit prominently in the live mix. His damaged guitar squalls may bear little allegiance to anything but themselves, yet at moments there’s a hint of a sound evocative of the damaged riffs of the much-missed Roland S. Howard. With songs like ‘In The Vein’ his ringing fretwork is possessed with a David Lynch inspired twang.

Accompanied by a drum kit live, the pocket symphony of ‘Death Bed Daddy’ is animated with due justice. Providing one of the sets closing moments is ‘Old Man’. With Whitney’s husky and slightly disconcerting vocal persona lurking distantly in the instrumental clamour, he groans out a twisted recitation of a narrative of dejection and woe. Twisting and drifting out of shape, the group’s set embraces the moody atmospherics and weird contradictions their dark sound congeals.