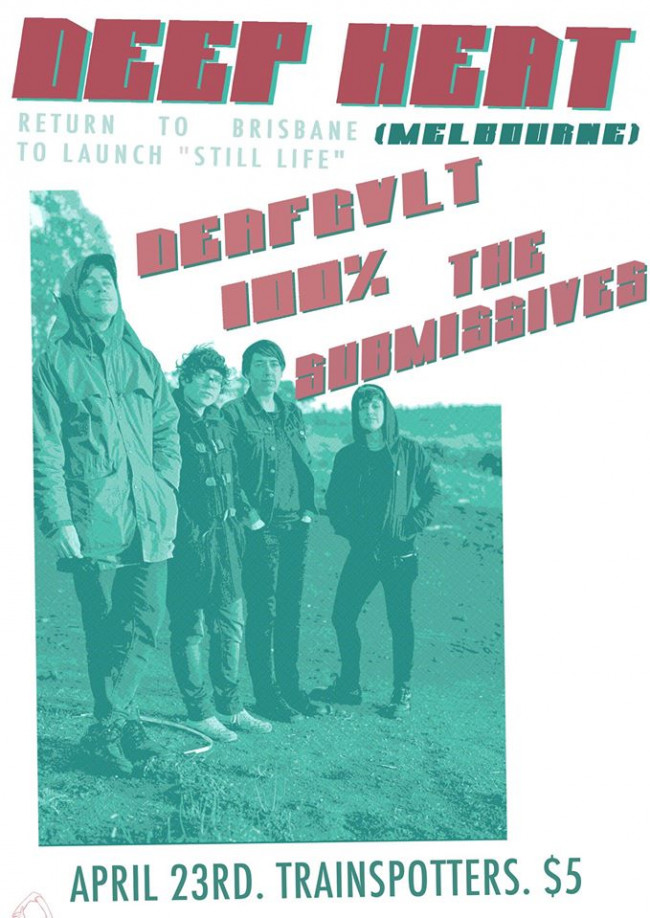 Deafcult are aptly named. Normally I’m not keen on earplugs but tonight I am perfectly happy with the foamy ones I use for whippersnipping, taking the harsh edge off while the physical force of the five piece surrounds me. I ponder from the back of the room whether I am the only person truly enjoying the full minute of three-guitar feedback between songs. As if in reply, an elderly woman (silver perm, apricot cardigan) enters from the pokies room, tailed by security, and makes her way up the front to nod along. A couple dances romantically. Deafcult’s self-titled EP of 2015 captured a lot of hearts with its mix of melody and noise, drive and dream, song and texture. Tonight those instant classics are supplemented by a newie or two, which dial up the heavy-MBV element. One song in particular is incredible, marked by woozily descending “oohs”, nailing that mix of sweetness and gut churn.

100% are another group that, for all their pastel and faux-corporate branding, have a booming physical presence in live form. The techno undercurrent has come to the fore, meeting the gothic drama of Léna’s vocals in an almost EBM sweet spot. Yet they still sparkle like their silver sequined flag. Impressively, and in keeping with their “1, 2, 3, 100%” rhetoric, the three-piece takes up no more than two square metres in a tight, two-synth and bass guitar formation. I send a photo to a friend and with the green stage lights, he thinks it’s a concept band with civil service desk lamps on top of their keyboards (not a bad gimmick). All workplace decorum is smashed, however, when Léna strides into the audience to stare down some dancers. I don’t take another photo.

“Everyone in Melbourne has a punk band”, observes one punter in the DOSA. That’s too simple a sobriquet for Deep Heat, who put punk energy into a nuanced, Sonic Youth-tinged sound in a similar ballpark to Infinite Void (which shares members). Their shared Poison City label, which put out the recent Still Life LP, is great for such stuff. Word is that last night, Deep Heat and some other bands played an amazing show in West End’s tiny People’s Park, after security concerns shut down the intended gallery show in a demolition-marked building. It’s easy to see how the band would thrive in such a setting as they bring an uncommon intensity to this space, essentially a train station bar. (Which is, it should be said, comfortable, convenient, loud, friendly and cheap with an impeccable booking record over the last couple of years – keep it up Trainspotters.) Three singers share and trade hollers over duelling guitars and every song is an anthem. I’ve jumped on board late, but plenty of people here are excited and even a bit emotional, with the band saying this is their last tour. The album, if it’s any consolation, is killer.

I am suspicious of the term ‘world class’, but it’s mad that this gig cost $5.