It’s a thin line, pt2 | Are there actually any great bands that have returned greater than ever? 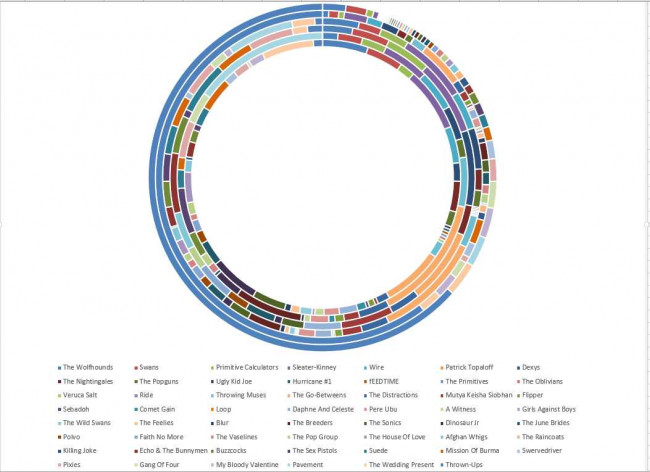 Well. You thought it was thin, but actually it’s even thinner than that. So thin, in fact, that there’s no point placing a visual representation of it because the naked eye cannot see it.

So we’ll have to make do with this one. A representation of the original thin line.

Anyway. Yesterday’s chart of Bands that should never have reformed vs Great bands that have returned great got the Collapse Board editors to thinking. That’s all very well, returning great as a great band, but are there actually any great bands that have returned greater than ever? So we applied scientific theory and qualitative research methods and a bit of the grounded theoretical framework because that’s the sort of guys and gals we are, and we came up with the following, sobering table. (This is the one that will lose us the few transitory friends we still have.) A chilling reflection of the state of present-day music. We applied rigid parameters to the process, taking voting on various social media networks (OK then, Facebook) into account, and applied a little quantatitive research methodology as well as the omnipresent and so-necessary ethnomusicological process to help us interpret our findings.

Here is the first chart we came up with. Crazy shit.

There’s no getting round the bare facts. Only four (4) great bands in the entire pantheon of alt.indie have returned greater than before, and two of these are disqualified for being so obscure even Simon Cowell hasn’t heard of them. So it’s two (2) great bands, and one of these is disqualified for being female cos we don’t want to alienate the NME’s readership, heavens no. So – GET THIS DOWN YOUR CHOKEHOLE AND SPREAD THE NEWS ON BOTTOMFEED BABY – only one (1) band in the entire pantheon of alt.indie has returned greater than before, and that band is The Wolfhounds.

Here. Let’s have a song to celebrate.

AND FUCK OFF THE REST OF YOU, RIGHT NOW!!!

One Response to It’s a thin line, pt2 | Are there actually any great bands that have returned greater than ever?