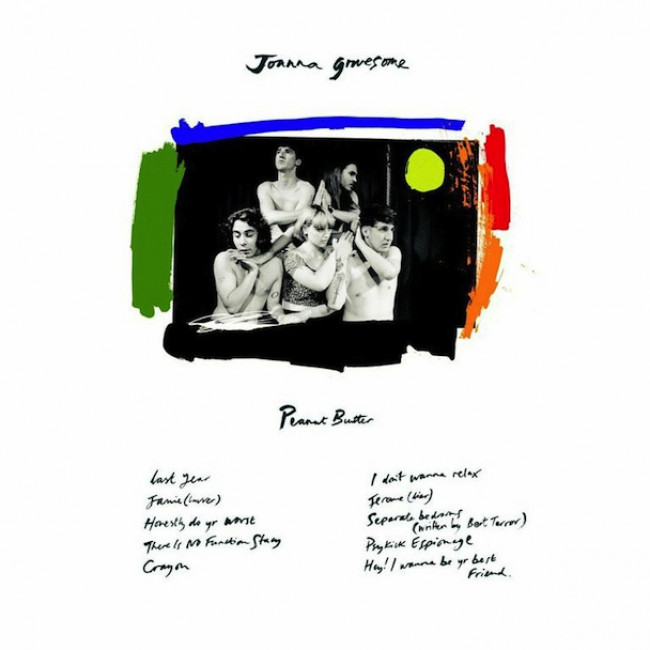 Despite what many a cantankerous punk will tell you it really doesn’t take too much to start a DIY band. It’s easy enough to find like minded, rough and ready members with a similar disliking for authority; it’s easy to put a middle finger up to the concept of the music business and scrawl ‘DIY or Die’ all over your organic, fair trade shirt before heading out to devour vegan hotdogs at the local punk show. It’s easy enough to do all of that but what about when the music industry comes to your doorstep, when the national press start to sniff fresh meat and the big guys want a piece of the DIY pie. So DIY or die; what do you do?

After the success of their debut album Weird Sister, Cardiff’s finest, Joanna Gruesome, surely must have been contemplating the very same thing. Well I assume, I’m not in their heads. What I do know is that they have had a whirlwind brush with the music industry that must have had an effect on their outlook as a band.

At the band’s three-night residency at Power Lunches in London in January 2015, a perfectly wrapped packaged that contained a bottle of a very well known whisky brand was found in the venue. The note that came with it wished the band good luck for their first night of the residency. Weirdest thing is no one, not even the venue staff, saw anyone drop off the package. Clearly we’re dealing with some messed up vampire music biz shit and you have to made of stone not to feel a little chill down the back of your neck at the thought of that.

Despite feeling the heebie jeebies at the presence of the music industry vampire Joanna Gruesome still played an amazing set and showcased sneak peeks of what was to become the follow up record, Peanut Butter.

Short, sweet and yummy, much like the album title which I get now, Peanut Butter, is an impressive release which showcases a band who wanted to stay loyal to their punk roots. The album has an overall sound that is rawer than their previous release; a new direction which compliments their poppier side rather than alienates it. Songs like ‘I Don’t Wanna Relax’ seem to pile in all of the extra feedback the band wanted to get on the album in one short space.

While the band has kept the same aesthetic and influences, that cannot be denied, they have developed their approach and the results make indie pop heaven. Thanks to MJ from Hookworms, who recorded Peanut Butter and Weird Sister, this album has been given a Phil Spector-esque, circa 80s post punk, wall of sound.

The album kicks off with ‘Last Year’, which rushes into existence in a screeching, pounding cacophony of noise. McArdle showcases more of the yelped, feedback obscured vocals that garnered the band attention on Weird Sister and made their tour and friendship with noise punks Perfect Pussy make more sense.

Some aspects of this ‘Last Year’ sound like they could have been lifted straight from the band’s first album. Joanna Gruesome has been accused of sticking to what they know a bit too hard and fast. The same could be said for any band though; perhaps if the song is good enough a bit of repetition doesn’t matter.

After confusing us with a song that sounds like their past the band then takes a swerve to the left and offers up ‘Jamie (Luvver)’; a long haired dazed out summer spectacle. There are so many dreamy melodies on this track it’s almost too much. I usually imagine listening to JGru while skipping through a field on a sunny day with an almost menacing grin on my face. Of course this has never happened. The band are usually the soundtrack to my bus journeys through the depths of South London but in some ways aren’t those two examples the same (they’re not I know but you really have to love South London to even consider that).

It also seems to be a running theme in my Joanna Gruesome listening sessions that either I’m losing my hearing or the vocals are always obscured in such a way that you can never really tell what they’re singing. Perhaps I should seek a doctor or My Bloody Valentine was a big influence on the band. Either way, I’m pretty sure on ‘Jamie (Luvver)’ they sing “you were in a daft punk band so sue me”.

The rest of the album has plenty of gems hidden in the feedback. Clocking in at under 2 minutes, ‘Honestly Do Yr Worst’ doesn’t waste it’s time. Gets in, makes you feel a twinge of nervous energy and hurries out of there. ‘There Is No Function Stacy’ has just enough essence of Baggy and a whiff of Britpop to take you back to the early 90s. Swirling melodies, big sounds; the band only need to acquire matching bowl haircuts and turtle necks to make the image complete.

The only song on the album to break the under 3 minutes rule is ‘Crayon’, which is a whole 3 minutes 11 seconds long. It’s stop and start chords and the jagged nature of the song’s rhythm make me wanna dance like Kim Gordon in every Sonic Youth video ever (if you’re unsure of what that is, it involves dancing with your feet cemented to the floor, swaying your shoulders and slowly jerking up and down- it makes more sense when you do it in real life). Another standout, dance like Kim Gordon track is ‘Psykick Espionage’, taken from the band’s split release with Perfect Pussy.

Though only 10 tracks long the album does also contain the brilliant though already released ‘Jerome (Liar)’; taken from the band’s split release with Bristol band Trust Fund. The band has also included an incredible cover of ‘Separate Bedrooms’ by Bristol DIY act Cup Winners’ Cup (previously Black Terror). The album closes with ‘Hey! I Wanna Be Yr Best Friend’; a come down like song that comes to an abrupt end. A song you need after the emotional rollercoaster, noise fest that this album is.

Ultimately, Joanna Gruesome don’t care about what you, the music industry even your mum thinks of them or whether they’re as DIY as you want them to be. They probably never have done. It’s the whole ethos of their band. Even their name, as journalist Kitty Empire points out in The Observer, suggests a band that don’t particularly care about music industry slickness, they just like a good Joanna Newsom-pun. Peanut Butter is a continuation of that ethos that showcases Joanna Gruesome reaching new levels in their music; simultaneously holding onto what they know whilst reaching out to world beyond the UK DIY punk scene.