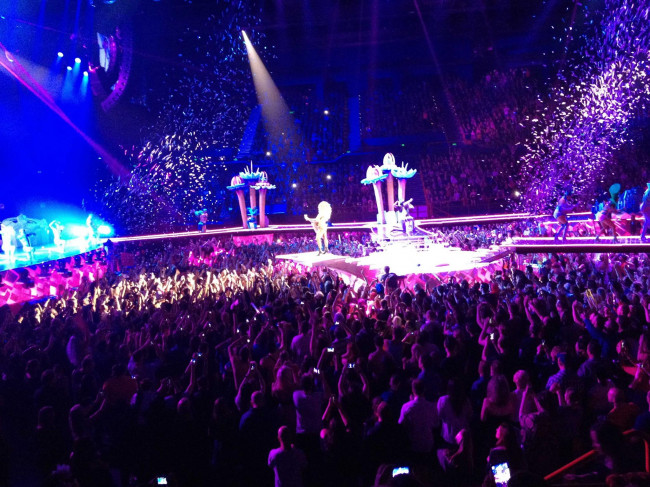 She is my new God.

She understands that at the core we are all lonely, we are all lost and searching for meaning, however fleeting. She is willing to embody that meaning. She knows at heart we are all lost, bewildered children searching for the ultimate heavy metal lick. She is a woman of choice. She is about artifice AND authenticity (as she tells us several times tonight). She likes to swear and show off her ass and the “nice asses” of her dancers. She likes to play dress up. She leads us on. She makes us feel special, her children – by paying just the right amount of attention. She exhorts us to wave our hands, to worship her Venus, so we do.  We do want to see her naked, but we don’t care if she’s not.

We shower her in gifts, love notes.

“Lady Gaga, you are my wonderment and my life,” reads a typical one, “You gave me purpose and direction and the ability to be really be myself. You will shine eternal and we will worship you forever. You are the most incredible human ever to walk this earth, a being made of light, and you understand each and every one of us.” (I am not making this up, least not the meaning. She reads several of these love notes out, rewarding the more needy with the promise of a liaison afterwards backstage.)

When she touches us, we die just a little bit more inside.

All the colour and screens and glitter and sleazy dance moves and disapparating stage sets and fingertip magic, and soft power ballads, and tear-streaked fans, and a bewilderment of wigs and costumes, and relentless beautiful bruising EDM punctuated by FUCKS and MOTHERFUCKS and humour mixed in with zero humility (but we’re not looking for humility, us, her converted and believing) and the gifts. We shower her in gifts and love notes and she showers us with love: no hypocritical renunciation of sex here but a full-blooded, bare-remove embracing and embodiment of it. She keeps prodding us, goading us, rewarding us.

It’s not Madonna taken to the next stage. It’s really isn’t. Madonna never understood us. She never reached out like this.

This isn’t Warhol, despite what the Missiah would have us believe. He was never warm, empathetic like Gaga. He never shed several skins and took the front of the stage dressed as a giant latex octopus.

This isn’t even Amanda fucking Palmer, although the rampant carnality on display forcibly reminds me of her, particularly during the suitably histrionic Axl Rose-esque (prime Axl Rose, mark you) version of Born This Way solo on piano, with a sobbing fan cradled in her arms, crowd-centre. (I AM NOT MAKING THIS UP!)

This is more what my dreams of Ziggy Stardust were like, only taken several millennial steps above all that rank unsophisticated posing. Single-minded focused determination, the beat hammering hammering hammering… the separation between idol and audience all the more pronounced because she obviously CARES for us so fucking much. But Ziggy never played guitar like these heavy metal little monsters.

She is my new God.

I have my works, my texts of the Newest Testament. Those defiled unbelievers in the press – but no, I shouldn’t be angry, Lady Gaga tells us we were all one and we should embrace our individuality – would have you believe that we THE FAITHFUL don’t appreciate the new Newest Testament as much as the older versions tonight, the new testament, the one she calls ARTPOP. Not so! NOT SO! Every word has been passed down and examined and embraced, and added to the wealth of knowledge she has given us before. We stand when expected, melt when demanded. She tells us we shouldn’t let the people in the suburbs dictate what we listen to, what we watch, how we dress – and we CHEER, despite the fact Brisbane is a city composed entirely of suburbs. She’s Gaga and we trust her implicitly.

She is us and we are her, and we live out our dreams through her every thrust and shriek. She turns the house lights on for 10 minutes so we can celebrate ourselves. She gets changed right in front of everyone, stage centre. She struts and struts and struts.

NO CAMERAS/RECORDERS state the tickets. How could you possibly hope to capture this? The living word of God.

She quotes Mark E. Smith (Jewels N’ Drugs). She rasps like Courtney Love (on Swine). She emotes like the actual Madonna. She is sex and love and light incarnate.

…and yes when I am in bed later, I will touch myself and think of you.