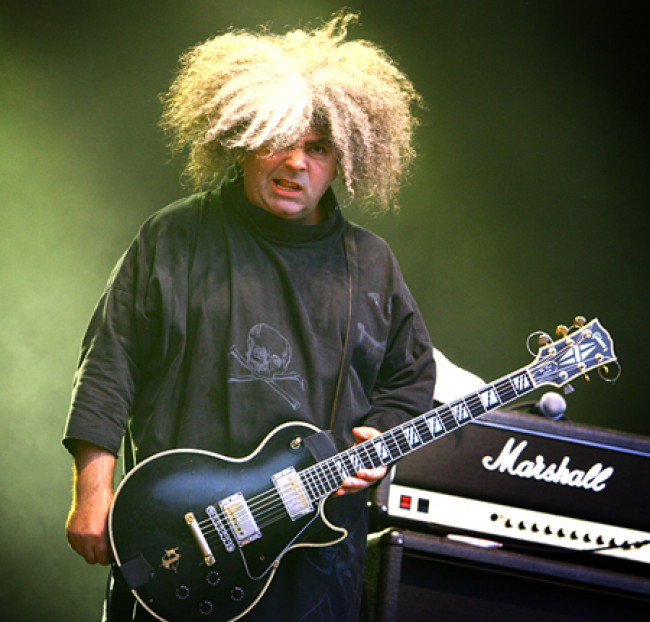 The night starts off with uncertainty. My partner in crime for this somewhat anticipated show Everett True had to cancel due to falling off a cliff and dying. So I was left to wing my way into the confines of the venue with no more than a bottle of water and a bullshit excuse to get myself in through the door. Suffice to say, I succeeded as this was not the first time I had to bullshit my way into something. I told the door lady my name was Raoul Duke, writing for the LA Weekly. She in turn smiled and let me in. Unfortunately my water bottle didn’t make it through the door.

I entered feeling quietly parched but decided to sacrifice my bodily needs and reserve myself prime real estate for the evening’s proceedings. There is no better place for a bullshit music reporter to witness a show than the barrier and nothing was getting in my way. Surprisingly, nobody joined me and I was the only one up the front for the first act which I didn’t even know was a part of the show. I honestly thought these men in their late 30s with tattoos were the roadies for the other two bands but I guess I was wrong. I cannot for the life of me remember the name of the band but with what I’m about to write about them I’m probably doing them a favour by keeping them anonymous.

So anyway these bunch of fork-lifters carry on stage trying to act half their age playing standard bluesy riffs in drop-D tuning in 4/4 time. How original. The only good thing I can say about the band is the bass player had a really nice tone coming from his Ashdown rig and was the only who didn’t look like a total Muppet on stage. The rest were a lot to be desired. The guitarist had some nice Stratocasters… that was it. The two front men (how original) were crap. I couldn’t stop laughing at one of them who kept alternating between a Henry Rollins pose and also ripping his hair out, putting his hand down his pants over his cock and then licking his palm, what else… umm oh yeah and doing a Billy Duffy air guitar strumming with the mic in his hand (how original). There is nothing more pathetic than a grown man well into his thirties who has that desperation of becoming a rock star doing bathroom/bedroom mirror rock poses. I mean come on people, Christ! In the last song he decided to jump off stage and run into the crowd not realising his mike cable had popped out of the DI box so he just left it there. I happily picked it up and started trying to whip him with the XLR cable until security told me to fuck off or I was going to get fucked up. Anyways, I’ve wasted enough words on these guys.

Next were Helmet and no it’s not the real Helmet circa Meantime (’92) and Betty (’94) with the monster Bogdan/Stanier rhythm section. This was the new Helmet. A bunch of dudes with baseball caps fronted by Page whose nearly twice their age. I was fortunate enough to meet Page after the show last time they were here and he is a really nice guy. I was a huge fan of these guys growing up in the 90s and they are always good fun to mosh to with their oddball time signatures and pioneering stop/start riffage. Unfortunately, I found the show quite boring. Whenever they played something from their back catalogue in their heyday, I and others danced in the slam-pit profusely. However their newer stuff just couldn’t get the same reaction out of the same audience. Perhaps it was because I had already seen them a few years back, or maybe their new stuff plain sucks…who knows?

Now was time for the headlining act: The Melvins…or is it just Melvins? Who cares? Anyways, one thing I’ve always liked about these guys is they never took themselves too seriously. I like bands like that because then if they suck no one cares and if they’re good it makes them cooler. Pretty smart huh? Well I definitely knew these guys didn’t suck as I had grown up with them too in the early 90s and also managed to catch them opening for Primus a few years back in Melbourne. Fuck they were loud back then and I was sitting right down the back of the venue with my ‘kick ass’ seats. I’m surprised that old building in St Kilda didn’t subsequently collapse and fall onto the Scenic Railway from the noise explosion.

Well, this time was different, I was right at the front and they were just as a loud as ever and closer! You do the math. I still can’t hear properly. The curtain drapes opened to a much cleaner stage with the other band’s gear out of the way. No introduction needed, these guys let the instruments do the talking. These guys know how to play the game. They didn’t break the fourth wall which I always respect and didn’t stop playing for 90 minutes straight. They opened with my favourite track of 1993’s Houdini, ‘Hag Me’.

Later in the set Dale Crover got off his drum stool and joined in for some vocals up front wearing nothing but a pair of jockeys and a basketball jersey. My god has he lost some weight! I also managed to see his left testicle hanging out too. Hopefully he didn’t mistake it for a floor tom when he sat back down. They played some of their newer material released with Ipecac, but whatever it was a good performance. Buzz had a solid performance but needs to lay off the twinkies and perhaps follow Dale’s new found exercise regime. The monk dress isn’t hiding it, sorry dude. Once again they incorporated their two live drum-kit system with Coady Willis mirroring Dale’s machine-like approach to the drums. Jared the Viking (because he dressed like a Viking at the Palais gig) was very unassuming and did his job with his Jazz Bass cutting through mix like a Caesarean birth. All in all, cool show. Was it all worth it? Sure, ’cause I got in for free.