“Minimum rock and roll”: An interview with Ian Svenonius of Chain And The Gang 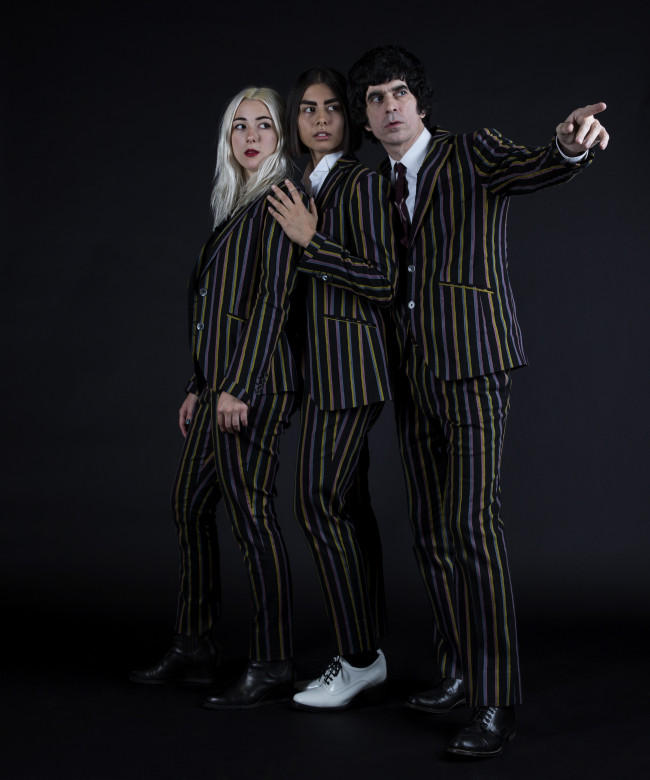 We’re not just reciting some studio masterpiece. Our songs are tossed off, they’re just these tossed off ads for a happening or interaction, you know?

Ahead of the first Australian tour by Chain and the Gang, the garage funk group described by Henry Rollins as “one of the coolest live bands anywhere”, I spoke with frontman Ian Svenonius. Equal parts enigmatic and energetic, Ian previously led Nation of Ulysses, The Make-Up, Weird War and a clutch of more obscure projects, always foregrounding his trademark socio-political rhetoric and physically grabbing attention in the all-important live setting. This unique persona blurs into his drolly incisive cultural commentary as the author of books The Psychic Soviet and Supernatural Strategies for Making A Rock and Roll Group and as the interviewer for Vice’s Soft Focus. Clearly, Ian has things to say, and we are here to listen.

You’ve said that bands should start with a photo and an ideological goal. I’ve got your photo, thanks. So what’s the goal of Chain and the Gang, and how might that relate to sharp suits with rainbow pinstripes?

Well the stripes are alluding to our origin. When the group first started we wore prison stripes. You know, Chain and the Gang, we’re a chain gang. And now it’s just being alluded to because you know, you have to change your clothes at some point. And the chains and stripes are because we are the one “down with liberty” rock and roll group. Down with liberty: chains. And we’re like a chain gang, like Sam Cooke sang about, we’re on the side of the road, we’re manacled together, we are tied together, we’re dancing and we’re singing and we’re making the best of it.

And what can you tell me about [latest album] Minimum Rock and Roll?

Well minimum rock and roll: you’ve had the maximum, it’s not enough, now try the minimum. Minimum rock and roll. It’s less is more. In our world, rock and roll is the only tool that’s kind of accessible to the hoi polloi. It’s our one pulpit. And people are joining us now; since the advent of the Internet there’s no longer an underground per se. Everybody’s kind of thrown in the same soup as Beyoncé and Justin Timberlake and it’s a real nightmare. So we’re saying no, don’t compete with them. Don’t compete with them. Do what the Viet Cong did, you know, they didn’t try to build a B-52 bomber, they sharpened some sticks and they won.

The big news yesterday, I don’t know if you heard, was that Adele broke her Grammy and she gave half to Beyoncé. And I wonder –

Wait, what did she do?

She broke her Grammy in half and said, “This really belongs to Beyoncé”, and she threw half the Grammy to Beyoncé. Does this show that musicians could overcome their narcissism to organise and act morally?

Wow. Well we are at a juncture right now, I think in a sense we were in this repressed fantasy where everybody thought maybe everything will be okay because there’s a charismatic president. A lot of the energy of activism had been repressed for eight years and now it’s boiling up. That’s good that Adele has shown class consciousness in a sense, some kind of communitarianism, because the thing with this activism is, it’s gotta be channelled in the right way. Whose agenda are we representing? You’ve got to watch out that your agenda doesn’t get hijacked by imperialists. Do you know what I mean?

Like all this anti-Trump rhetoric that focuses on Russia, that’s, you know, NO. You can’t take the bait. Because that’s just the imperialist agenda. Do you know what I mean? Do you know?

I take this opportunity to ask about the current status of the Nation of Ulysses’ 13 Point Program to Destroy America and its possible relevance to recent events, but Ian is tight-lipped and only observes enigmatically, “I definitely am prophetic and I show an incredible prescience”.

You don’t make any effort to separate your music from your other endeavours like writing, for example through pseudonyms, and I wonder: do you have a take on the role of the intellectual in music? And do you see yourself that way?

I don’t know. Music right now is really anti-intellectual, especially underground music has become incredibly conservative. It’s sad that the people who are involved in punk rock seem more conservative in a lot of ways than, you know, corporate artists. That’s a little bit sad. Everybody’s prepared to say anything, everybody’s praying for the same thing, no one’s prepared to jeopardise their opportunities, and the possibility of notoriety has made people very conservative. It’s really, really sad. And maybe because I am not involved in you know, trying to be number one on Pitchfork, maybe I sometimes actually say something. But I wouldn’t call myself an intellectual.

I ask whether Ian has a view on the paradox of great music by shit people, but Ian is perturbed by this line of questioning.

It’s weird that we know so much about the people that make music. I mean I don’t know a lot about Hank Williams’ private life, or whoever, but now we’re in this age of celebrity where people know a lot. I don’t know, great music by shitty people? It’s an interesting idea… how about, money makes people shitty? People have a lot of money, it’s really corrupting a lot of times. They don’t have to live in a community that has any reciprocity, you know, and capitalism ultimately encourages our kind of, the elite… people are able to indulge their behaviour because they’re lucky enough I guess.

So let’s come back to the music. I’m interested in what Chain and the Gang live show is like, and do you have a favourite part?

You know, performing and communicating. I would say with Chain and the Gang, it’s a fun group because the concert is an event. We’re not just reciting some studio masterpiece. Our songs are tossed off, they’re just these tossed off ads for a happening or interaction, you know? We’re just a performance based band. We’re trying to communicate a little bit and you know, have a good time.

Ian reckons it’s about 10 years since he was last in Australia. We discuss his various projects, noting that Weird War are supporting Chain and the Gang in Melbourne, while the Make-Up, having reformed for All Tomorrow’s Parties in 2012, are playing Primavera this year. Ian says, “I love the music and I like the people and it’s a good time to play it”. He is also busy with a “solo thing” and “this kind of disco record”. With time running short, in keeping with the theme of minimalism I suggest that we end with a game of “more or less”. This starts slowly but rapidly escalates.

Rock and roll? Uh, there should be less.

Funk? Uh, I mean, yeah I think there could be more funk, yeah sure.

I mean I don’t know that many protest songs, but they’re not usually very good.

What about bands with uniforms, or who all wear the same thing?

What about music criticism?

Well everyone’s a critic, so you know, if I say there should be fewer, that sounds like the final solution.

CHAIN AND THE GANG

Tickets $35.00 from johncurtinhotel.com and oztix.com.au

Tickets $35.00 from thetotehotel.com and oztix.com.au

Double Bill with I Heart Hiroshima