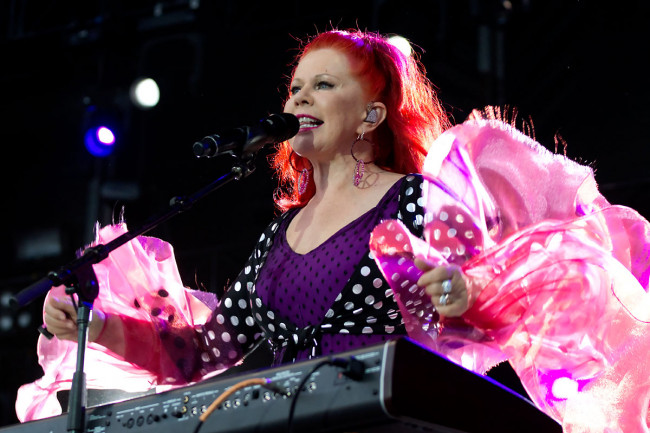 And we haven’t even talked about the music.

We’re at A Day on The Green, the popular mini-festival for the demographic who want to bring folding chairs and eskies to a gig (I’m down with this). We’re on the eastern side of a grassy hill at Sirromet, the winery founded by cigarette/property/motorsports magnate T. E. Morris while looking in a mirror, in the rural outskirts of Brisbane. We’re in a heatwave.

A big crowd has come early and prepared. Men in the ubiquitous Bunnings hats and floral shirts stand in semi-circles drinking from full-sized plastic wine bottles in coolers; plates of liquid blue cheese are passed across picnic rugs; one person in every group has brought a spray bottle with which they mist/drench their friends and bystanders every couple of minutes.

Machinations invoke a rowdy response with their string of ’80s dance-funk cult hits. The lineup is hard to reconcile if you think about it too much, but between sets DJ Grand Master Baitz provides the link: nostalgia, to which people commit with abandon. The Models have the blinding afternoon sun slot and the sometimes dark, weird edge of their recorded output comes out as a quirky layer on solid rock, in renditions of ‘I Hear Motion’ and the crowd-pleasing ‘Out of Mind, Out of Sight’ and ‘Barbados’. The crowd loosens up as the sun settles behind us. I’m now copping regular squirts of water in the earhole and dodging tumbling, smiling punters who have lost their purchase on the slope chasing tennis balls hit by DJ Grand Master Baitz in an Evel Knievel outfit.

The B-52s are the coolest. Even knowing that, I hadn’t been sure whether to see them. Sure, even a cheesy, botoxed, phoned-in performance wouldn’t be fatal for a band that has always traded in camp and plastic, but… could it be good? Yeah. Yep. Great, in fact. This hits 30 seconds into ‘Cosmic Thing’ when the twin voices of Cindy Wilson and Kate Pierson come in at full throttle, and it’s rubbed in a minute later when Kate takes some lines on her own and I wish I hadn’t left my sunglasses in the dash to the front. That voice. The long-term touring band gets it so right: thin and twangy guitar, tight, tough drums and funky-as-fuck bass. Fred, Kate and Cindy stand close together at the front of the stage, resplendent.

The B-52s have the coolest songs. ‘Mesopotamia’ is a skeletal funk history of an ancient civilization. ‘Lava’ is the ultimate two note riff. ‘Is That You, Mo-Dean?’ is about waiting for a bus and catching a UFO instead, ending with a minute-long group chant of “astral projector” which is always oddly moving and somehow more so in front of a large crowd. ‘Private Idaho’ also seems to mean a lot despite being complete nonsense and Kate nails the squeaky high notes, while Cindy hammers the pain in the party of ‘Dance This Mess Around’. The beating heart of the set comes with ‘Deadbeat Club’ and ‘Roam’.Fred takes off for a beauty nap at this point, leaving Kate to point out that The B-52s formed 40 years ago in Athens, Georgia. Remember ‘Nightswimming’ by their compatriots REM?

I forgot my shirt at the water’s edge
The moon is low tonight
Nightswimming deserves a quiet night
I’m not sure all these people understand
It’s not like years ago
The fear of getting caught
Of recklessness and water
They cannot see me naked
These things, they go away
Replaced by everyday

‘Deadbeat Club’ has always felt more celebratory but there’s a reflective tone as Kate and Cindy sing together, arm-in-arm, while a cool breeze comes in from the night.

The B-52s are the coolest. You know the part in ‘Losing My Edge’ where James Murphy lists all the seminal moments in rock history (‘the first Can show in Cologne’, ‘the first Suicide practices in a loft’)? My time machine would head fairly promptly to an old church in Athens, GA in 1977. I think about this while I get as close as I’m likely to, hearing ’52 Girls’ at Mount Cotton in 2017, and it’s pretty great. By the time they encore (quite genuinely, despite the setlist) with the compulsory ‘Rock Lobster’, everybody really is fruggin’.

It feels odd to move straight onto writing about Simple Minds and it feels odd on the night too. This is the most ‘stadium’ show I have ever seen. There must be a dozen people on stage, dozens of floodlights whirling around and the crowd loves it: dozens of spray bottles squirt into the air around us like geysers. The sound and staging are immaculate and Jim Kerr is a committed showman, striding the stage, asking to see hands and flattering the full-voiced audience. The sharper angles of ‘Promised You A Miracle’ stand out amid the moody, stratospheric anthems, but it’s ‘Don’t You Forget About Me’ that has the momentum for 10 minutes of audience participation late in the set, before a generous encore finishing with a pulsing ‘New Gold Dream’. Near us, a gent in a rainbow sombrero takes it upon himself to run back and forth through the audience, misting faces with what smells like chardonnay. He receives a surprisingly positive response, heads thrown back, tongues hanging from grinning mouths.