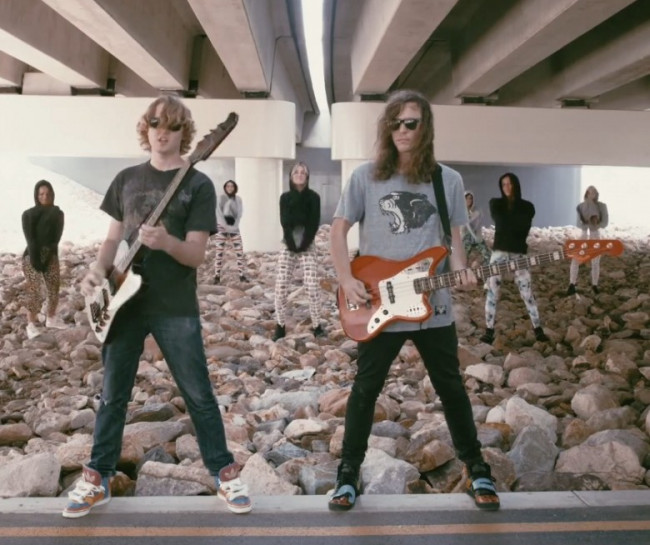 Justin Edwards: After Kimbra and Lana Del Ray, I didn’t know where we should go next. The new La Roux is fairly unforgettable, I did think about Iggy Azalea as they released a video for ‘Problem’ (the song that she features on) and she’s been in the news over here (further proof that everyone copies and pastes the same stories and never lets the facts get in the way of a good news story). Plus she’s done it without any help from the Australian music industry (which I always like to see) and I continue to be surprised at people who hold no bars on social media in referring to her as ‘a cunt’. ‘

But instead a Brisbane double bill. The first time I saw both of these bands I came away thinking that they were the best local bands I’d seen for ages. This is what Brisbane is taking to the world, what do we think?

Lee Alexandra Adcock: I can take or leave the Dune Rats track, but DZ Deathrays sound badass. That would be one helluva fun show. They should ditch the Dune Rats at a bar and go conquer a few cities on their own.

Everett True: I like Iggy Azalea. More than I like that bloody pizza advert that keeps interrupting my thoughts.

The opening of that Dune Rats video is enough to put me off them for life. Take off a Marlene Dietrich record for one more fucking generic indie rock band that rips off Bob Dylan (for the video YET AGAIN!) and about 10 fucking generations of triple j “noise” bands (for the song)… go fuck yourselves, you unoriginal, industry-sucking blowhards. Seems like in 2014 thinking in clichés is somehow considered original, long as you tip a knowing wink somewhere… we know we’re crap but it’s ok because we KNOW we’re crap, see? (See also Lily Allen.)

I agree DZ Deathrays seem like fun. Catchy and commercial as all hell, but I ain’t got shit against that. The vocals bug me… inasmuch as they’ve clearly paid more attention to the guitar sound and drums to a style of singing that is background filler at best… but don’t mind me. I still treasure mavericks. So sure, I like this but I never want to hear it again.

Justin Edwards: Well I guess Dune Rats have previous form for stealing video clip ideas after using DZ Deathrays’ ‘The Mess Up’ as the inspiration for their ‘Red Light Green Light’  clip.  This one might be more ‘punk rock’ if they didn’t have their mates following up in the background picking up the discarded sheets.

Lee Alexandra Adcock: Well, constant reinforcement of the mediocre creates a sort of status quo, yeah? Once the bar’s set that low, then that’s what the masses expect. (case in point – contemporary country music in the US – Gawker summed it up SO WELL last year.) Besides, career-minded bands don’t aim for “greatness” anymore, but for likes and mentions and retweets and all those signifies of popularity that somehow translate into sales and/or gig-goers.

Jodi Biddle: Dune Rats – I liked it better when Nada Surf did it. If you’re going to be derivative, at least be interesting. That being said, it’s not like it made my ears bleed or anything. It’s alright. But that’s all. DZ Deathrays – I really like their work. Their live show is a really great time. I was worried their new stuff might be too cleaned up compared to the last album but while it’s tighter, that hasn’t turned out to be a bad thing at all.