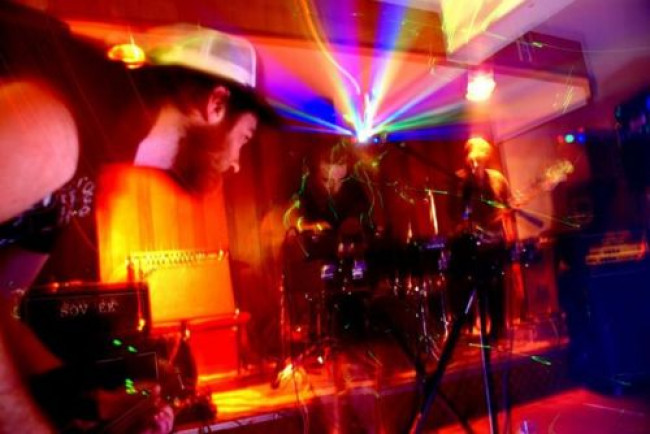 I’m going to have to take this blog entry down if another 60-odd people haven’t clicked on this in the next two hours, but signs are starting to look more favourable, so..

Bangs fuck. However great you were thinking that Thee Open Sex track is… and Bangs alive, it is it is… then… Wait. Let’s not reduce Song of the Day to mindless “better than” stanzas. Thee Open Sex rock as hard as The Black Angels, and Hookworms rock as hard as Mudhoney. And all four bands rock as hard as 13th Floor Elevators and Spacemen 3 and Boo Frog and… Wait. Let’s not reduce this to a simple litmus test. Hookworms are that nagging insistence deep inside your head that you will NEVER hear all the great music that’s going to be made, that you will never quit experiencing that buzz, that wonder that drew you fatally in towards rock’n’roll in the first place, that you will NEVER lose faith no matter how grim and sunny the world outside is, that actually the grimmer the world becomes and the more mundane, the more magical music like this will sound.

Here is my favourite blurb anyone has written for Collapse Board in 2013:

Scott Creney has seen the present of rock music and its name is Hookworms.

This is what the man himself had to say (in quite the greatest review any music website anywhere has run this year):

Hookworms take your lazy assumptions — motrik and stereolab and etc — and amplify them into something entirely new. They reflect our unpreparedness, our belief that it has already happened, our faith in detritus, and push it beyond our expectations. Worship them.

This is where the man himself got it from, from our Number One Tamsin, Tamsin:

A giant, whirling cauldron of space-guitar-organ-screaming.

Bangs fuck. Hookworms! Such intensity of expression. Such lucidity of graceful madness. Such a relentless, loving way around a groove. The song builds, and it builds. And it builds. My minor complaint here is not that the song lasts for just under nine minutes… it’s that it doesn’t last for just under 90 minutes, just under 900 minutes. Bangs wept! Have we ever experienced such incredible pounding righteousness within music before 2013?

Here’s the pull quote for the mountebanks:

Bangs fuck! Such AWESOME psychedelia from Leeds Hookworms! Everything folk would dearly love to claim for Primal Scream’s more orgasmic moments… and more besides. Starts off LOUD like lucidity and  goes plateauing on upwards and onwards from there. Not so much total fucking godhead as total fucking dronehead.

If anything, the album’s even better.