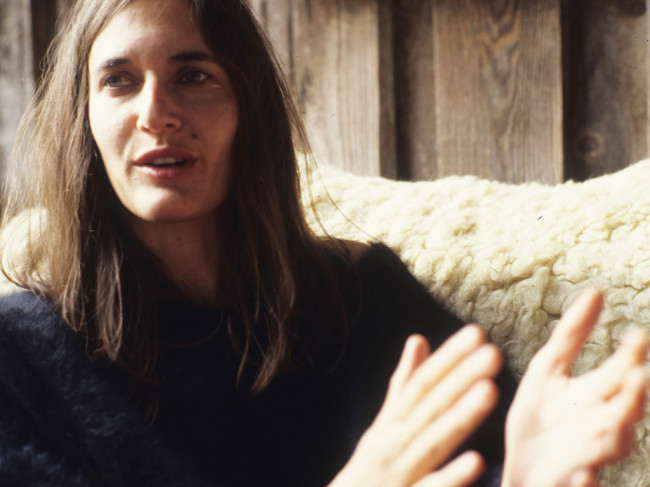 Well, this reminds me of David Thomas Broughton – although I have no way of knowing whether shape-shifter Josephine Foster likes to engage in a little deadpan minimalist slapstick humour while singing her resonant, mournful songs live. (“He moves likes a rock star in slow motion.”) Possibly not.

Well, this reminds me of a past I never knew, never came close to knowing – only imagined via flickering, fadind reels of black and white, folk chatting and dancing and surviving.

Well, this reminds me of Steve Gullick – and that will never make me unhappy.

Well, every time I hear a new song from Josephine Foster’s new album I’m A Dreamer it’s my New Favourite Song in the World Ever – and then I do a quick Google for the new album from Josephine Foster and it doesn’t seem to exist anywhere, and I’m falling to wondering whether I’m imagining some most delicious phantasm in the mind, one that calls down images of an analogue future and transistor past, one where all music is proud, impassioned, deeply human gestures, shaded and coloured by sweeps of piano and a deep female voice, and I think to myself damn I never want to stop imagining such phantasms if that’s true. And then I think, how the hell did my imagination come to possess and articulate such beauty?

I want to bring this conversation back to the music right now, but where? Does such beauty even exist?

An ad for something or other concerning JD Salinger precludes this next clip. It seems wildly appropriate. (What’s up with me here? Why have I not bothered to listen to Josephine before? Frances May Morgan used to write about her constantly for Plan B Magazine. Tell me I must have loved her before now, and somehow forgotten. Loved and lost. Please tell me that.)

This is what Disney actually sounded like in the imaginations of generations of children.

The quote for the quote boys runs:

Everett True falls head over heels for the imaginary, magical – yet deeply human and affecting – worlds of the new Josephine Foster album I’m A Dreamer.

Back when I was American – spiritually, briefly, for a few years in the Nineties – 1 would delight in watching a children’s TV (PBS) programme called Mister Rogers’ Neighbourhood while horrendously hung over, and still drunk. In between the cute finger-puppets and films of children learning about acorns, the avuncular Fred Rogers – looked about 70, venerable like Denis Norden -would greet us. Dressed in a grey cardigan and slippers, and bearing such nuggets of homespun wisdom such as “I like you just the way you are” and “Everyone is special”, Fred would sing as he unbuttoned his top, removed his shoes and looked for his slippers in the cupboard.

It became a ritual. Every time I flew into NYC I’d be greeted by phone calls, “You’re special…” It left an indelible mark on me, contributed to my sense of well-being (usually low) and I became immensely sad upon learning of Fred’s death a few years’ back, felt somehow a part of my childhood had disappeared, even though I was well past 30 when I first encountered his gentle, wise presence.

Truth is a simple and awkward word. When applied to singers and songwriters, we think of ‘authentic’ living or the supposed sonic honesty of live/acoustic instrumentation; of confessional lyrics. But what makes a song true, what effects those moments of resonance, is perhaps something less directly connected to surface reality and more to form, to sound itself, as well as your subconscious stores of imagery and memory. It is these last three factors that finally establish a song as a believable space in which you participate, whether that’s an imaginary landscape or shared room.

4 Responses to Song of the day – 631: Josephine Foster