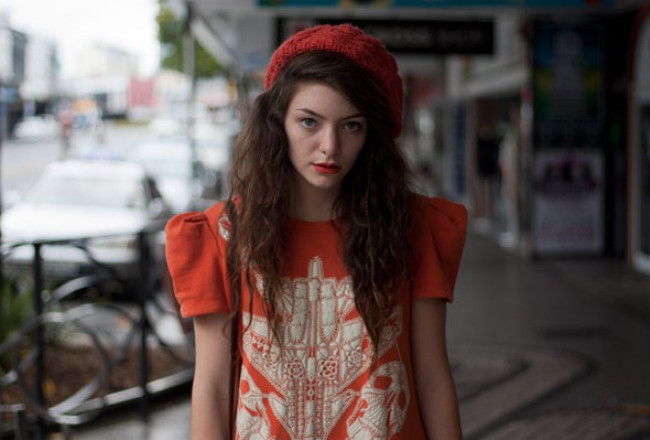 The album is great. It debuted on Rdio last week, and I’ve spent a lot of time since then listening to it. ‘Ribs’ might be my favorite, the way it bends and surges, but it’s ‘Royals’ that keeps haunting me.

I find myself drawn to the strange sparseness of its sound, the subtle, implied message that you can transcend a world of empty materialism and inherited privilege through your imagination, through the ability to create your own world.
Lorde – Pure Heroine (Lava/Republic)

In past generations, folk wanted to know what their neighbours were up to, in case they needed to splash out on that fresh coat of beige.
In this generation, people are already asking What Would Pussy Riot do?
In future generations, hipstas will be posing What Did Scott Creney Say?

I appreciate I’m probably reading too much into this, but am I the only one here who sees ‘Royals’ as a direct slap in the face to everyone in the following photograph?

But everybody’s like:
Crystal
Maybach
Diamonds on your timepiece
Jet planes
Islands
Tigers on a gold leash

We don’t care, we aren’t caught up in your love affair

And we’ll never be royals (royals)
It don’t run in our blood
That kind of lux just ain’t for us, we crave a different kind of buzz

An excellent review and a worrying and baffling response in some quarters. Dorian L’s rejoinder on twitter highlights all that is wrong with the liberal intelligentsia. They claim the moral high ground based on a false premise, they are always always right and anybody who disagrees is either an idiot a misogynist, racist, homophobic or a mix and match of all four. To adopt such a baseless stance really does do an injustice to these very real issues. Yet here Mr. L backtracks yet offers no apology (although the best one could expect is the old “I’m sorry YOU feel like that” none apology). He fails to point out were the review is sexist or even when he adopts the fall back position where there are sexist “undertones.” Why? Because there aren’t any! He also calls the review repellent? Again why? He does very little to explain it- Because he doesn’t agree with it? I find it quite dangerous to call something that clearly isn’t – “sexist” as a way of dismissing it for want of a better argument.

It’s refreshing to see an alternative view expressed to the baffling consensus about a distinctly average band, which make blandness an art form.
El Paramore, comment left on Haim – Days Are Gone (Columbia)

Thank you, El Paramore. My tolerance for your ham-faced, retro-retroist, perky yet oddly laudable attempt at setting up Cyndi Lauper revivalist meetings has just shot up accordingly. I’ll make sure to mention it next time I’m looking for paid work.

There is joy to be had in this album, but not much smiling. I’ll never understand why people excuse empty-headed music because its creators are young, or because it’s ‘only pop music’. Young doesn’t have to mean shallow. And pop doesn’t have to be fluff. When people are making pop that is this fun, this intriguing, that gets under your skin, that has emotional/intellectual weight, that is everywhere you go but still impossible to pin down, it seems like an act of defeat to settle for anything less. To explain a record’s emptiness by falling back on its genre. To insist that anyone who believes otherwise simply doesn’t like pop.
Lorde – Pure Heroine (Lava/Republic)

Welcome to the Collapse Board Hivemind. It’s a scary place, this inner sanctum. Ten queen bees and a whole load of honey. Critics stung into silence. No one bee hives themselves. What we don’t like could be written on the back of a discarded Smiths flyer. We will change your mind quicker than you can say fuck “Peace, Love and… there is a band called Understanding, right?” Oh sorry, did I type your mind? Of course I meant our (singular). I recall, back in the day – The Family Cat it was, Melody Maker 1991… or was it The Kills, cover of Careless Talk Costs Lives #8, 2002 – I would change my mind about music and start contradicting myself, within a couple of lines. As someone better-known than me once reckoned: Contradiction is sex. Words can last a lifetime, and ours are supposed to be disposed alongside that preconception you have that music critics are on your side. No. They’re not. They’re on the side of whomever pays the most. (Oh come on, don’t whine. It’s the truth. No one ever paid music critics shit.) And if no one pays… well, that’s easy.

There’s so much I don’t want to say about this song. Let it linger. Let it last. Don’t bring me down with your clumsy metaphorical grasp of a language which never should have been given to you in the first place, the way you keep disabusing it. The way it lulls, the way it entreats. The way it beats; the way it beats. The lack of shouting, the subtle point and counterpoint. The directness of the lyrics. The fact it doesn’t remind me of Kate Bush or Unwound or Van Halen. Is it unhealthy to dream? we asked only two days ago, and back comes Debbie Harry at us, carolling down through the years: all virtual arrogance and steamy wide-brimmed hats. As Scott says, we can choose to inhabit whichever persona tempts us most that second… maybe don’t stick with it, that’s all. Or maybe you should? I may have misread him. Maybe it was someone else altogether.

My friends and I we’ve cracked the code
We count our dollars on the train to the party
And everyone who knows us knows
That we’re fine with this, we didn’t come from money

But every song’s like:
Gold teeth
Grey Goose
Tripping in the bathroom
Bloodstains
Ball gowns
Trashing the hotel room

We don’t care, we’re driving Cadillacs in our dreams