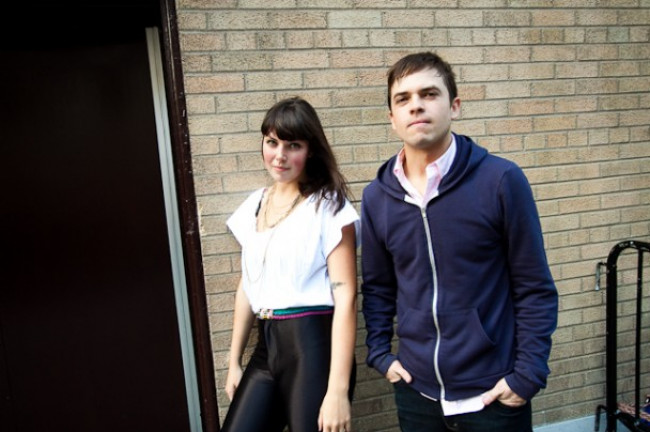 Damn it, Scott. I hate taking back my words, especially when they’re funny. Damn it. This is my second Song of the Day for Sleigh Bells and I suspect they’re nowhere near finished.

As he puts it:

Sleigh Bells exist alongside a group which may or may not include folks like Helen DeWitt, Michael Robbins, Harmony Korine, Sofia Coppola, Kenneth Goldsmith, and others (I have my suspicions about Ke$ha). These artists are all producing work that is saturated in 21st Century culture–celebrity, materialism, pornography, immediate gratification, persona v. personhood, exhibitionism/surveillance/voyeurism, disposability, and speed. They’ve swallowed every dense post-modern text and spit it back out as art in a way that suggests post-modernism is dead and we need a new term.

I have little to add to that. I just like to bounce up and down, and sledgehammer my head until there’s even less sense happening in it than normal. Bed goes up. Bed goes down. (These personae I’ve been taking on recently. You think there’s artifice involved?)

Now I read it again, that doesn’t seem like that much of a putdown – especially considering I was going to the gymnasium at the time. And dude, a choice between LMFAO’s ‘Party Anthem’ and Sleigh Bells? Don’t you even dare.

I’m not sure why this following comment on YouTube is so funny – especially as it speaks to the objectification of the ladies –  but it is: and it also seems oddly revealing. There must be a whole load of assumptions folk are making here, just out of sight.

Oh, wait. I’ve figured it out – and it doesn’t seem so funny. (It was funny cos it seemed to beckon in the surreal.)

So good. They’ve moved on from the gym to the boxing alleys, quite a leap. I don’t think it’s a coincidence they’re dressed up in sporting gear in this video. It seems like they’re what I might have been looking for – but didn’t always find – from M.I.A.

There is a light in my refrigerator that always goes out.

P.S. Friends on Facebook often post this video whenever the words Sleigh Bells are mentioned. Could someone explain, please?