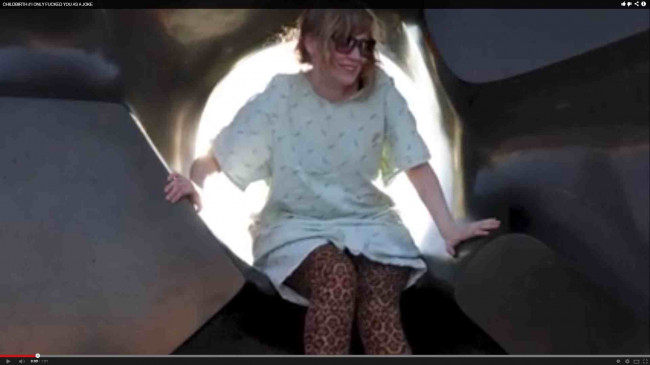 “I only fucked you as a joke!” sing the ladies in Seattle’s Childbirth. Ow. Wait. Is that supposed to be a burn? Damn, ladies. You know round these parts that counts only next to pity as a way to get laid.

Features members of Chastity Belt, TacocaT and Pony Time, so I guess this was always going to be a shoo-in for… Wait. You have no idea what I’m talking about? Just hold on a second.

This video disturbs me. There’s something quite WRONG about it. Maybe it’s the idea of ascribing sexuality to a genre that has its roots in what Simon Reynolds doubtless would’ve called something like an “almost virginal romanticism”. A genre that The Legend! was inextricably tied up in (excuse the pun).
Song of the day – 621: Pony Time

A long time ago, back in the dim and distant past when folk still thought Santorum was some form of fecal over-spill and that Kings Of Leon made good records, I used to write a column for Bust magazine, calledEVERETT TRUE’S FIRST LADIES OF ROCK. It was succinct, pithy: four female-led bands described via comparison and adjective and good humour.
Song of the day – 434: TacocaT (and a shout-out to Bust magazine)

Reminds me a little of the alienated romantic pop of Neverever. Makes me want to huddle with myself tightly in a corner of crowded bar, and burn a whole sheath full of Bauhaus B-sides. Makes me think of space and distance and 3am hangovers (Hobart, say). Makes me want to hug famous columnists decades before they got famous and tell them yes it’s OK in 20 years time you’re gonna be way famous and I’m gonna be spitting into thin air. Everything is a Puget Sound swell of emotion, the boat ride to fucking fucked paradise.
Song of the day – 622: Chastity Belt